#BookReview - A Prison Without Locks by David Ruggerio 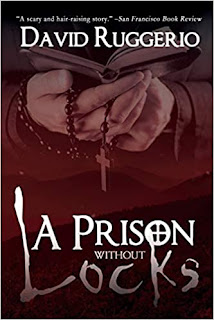 A Prison Without Locks

As a girl who grew up in one of those so-called “quaint hamlets” out there, they have personally always brought me nightmares. Although you might think they’re lovely to live in, this book actually sums them up perfectly; from the gossip mongers to the people you know who have a secret buried and you find them at bit scary to talk to, yet they’re always around.

We first meet Marlene Bourke-White. This is a journalist not taken seriously because she works for JRW, a company that’s not seen as a “real” publishing force because the news they print is in the realm of entertainment and celebrity stories. Thus, Marlene decides it’s time to attempt writing her first book. Of course, as all writers know, we have to have a subject before being able to pen a great novel, which Marlene just happens to find in the strangest of places.

A woman she works with and eats lunch with quite often, Tammy Russo, has told Marlene stories about her odd hometown. Tammy grew up in Wawarsing, a quaint hamlet in Upstate New York that has experienced everything from anemia to strange disappearances that seem to occur at an alarming rate. Although nothing has been enticing to Marlene as of yet, one day Tammy comes back with a story that just has to be written.

Readers find themselves transported to the Witch’s Hole State Forest in the village of Wawarsing. Everybody from local fly-fishermen to visiting hikers, tourists, and sightseers come here to gaze upon Stony Kill Falls. A major attraction for the area, the Falls top out at 87-feet, which is one reason why Wawarsing is one of the most “hilly” towns in the Appalachian foothills. (The northernmost point lies in the legendary Catskills, the same area where The Legend of Sleepy Hollow was set.)

This one October morning, Bobby, an overnight stocker at the local Wegman’s, decides to head to Stony Kill for a little fly casting. What he finds there, however, is a lot more than just a hungry trout. A pasty-faced boy is standing behind the cascading water, and when Bobby calls out to him, this young man turns his head and makes a sound that upsets the entire mass of woodland creatures and sends Bobby running back to town for help.

Shea Calhoun, a good Irish Catholic boy (now 60) is the pastor of St. Mary’s & St. Andrew’s Church. He was the one who got citizens to attend services in the clapboard church once again after he worked hard upon his arrival to Wawarsing. Reviving the church built in 1850, he also has an “ear” from his past who he seeks advice from on baffling matters, such as the one that’s about to be presented to him.

Local doctor, Roger Pretorius, is from a wealthy family. He chose to practice medicine in this middle-of-nowhere town because of a tremor in his left hand, as well as other “idiosyncrasies” he collected from his time in Haiti long ago that he believed would be more easily hidden in a small town.

We have a deputy named Harry and a town sheriff named Grady Lassard, who likes to drink quite a bit and is one of two lovers that a local married woman enjoys. When these people descend on Stony Kill Falls, they not only find a boy looking like a zombie, but they also are eye-witnesses to a horrific howl the boy expels right before he up and disappears. No one can find him. Even stranger is the fact that Deputy Harry knows beyond a shadow of a doubt that the kid they all just saw was the same person who was already found dead by woodcutters in the area.

And that’s just a taste of the story! The characters are numerous and represent every “human and their storefront” that can be found in every small town. Mary Jacobs is the nurse who knows all the gossip; Josie owns the local Pump N’ Munch Market and has her own interesting sex life. We meet Bean Blossom, the greengrocer; Pop, who owns the local butcher shop – you name it, the cast is all there.

Soon, out of the past comes a woman from the doctor’s life named Epiphany, who has a talent for being a sorceress. You also enter a basement that has a warning written in ancient Coptic that reads: “Abandon all hope, ye who enter here.” You’ll also race down a tunnel that holds a small army of mannequins that will seriously shake you up. Is a bottle of Holy Water gonna cut it, here? You’ll have to read to find out.

The best way to sum this up is that it takes me at least three days to read a book – on a good week, that is. This one? I opened it to commence reading for the normal amount of time and got so enveloped in this tale by the end of Page 2, I quite literally did nothing but read for the rest of the day. Yes, there will be repercussions from that but, I guarantee, you’ll do the same.

Quill says: Surprises, revelations, a plot that sent shock waves through my system—this story is one I will never forget!

For more information on A Prison Without Locks, please visit the author's website at: www.ruggeriobooks.com

Posted by FeatheredQuillBookReviews at 12:27 PM