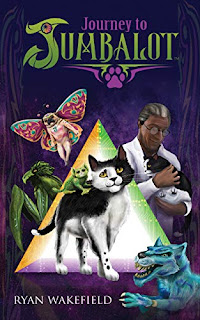 Upon reading the first pages of Journey to Jumbalot, by debut author Ryan Wakefield, readers will quickly discover that the story is more than just the journey of a housecat named Alby; it’s an adventure of epic proportions filled with exciting highs and lows and, the most intriguing part, hybrid animals.

Our story begins with Alby, a chronically hungry cat, who was once a stray, but now lives in a house with the wise Professor Wizoom, who busies himself inventing things in his home laboratory. On one particular evening, Alby hears all sorts of noise in the house and discovers that the professor is busy at work in his lab creating something mysterious that looks like a triangular doorway. Wizoom explains to the kitty about his hopes and plans that he’ll finally have his childhood dream come true of being able to travel to unknown lands once he completes the necessary adjustments to his creation.

The next day Alby awakens to complete silence, and is unable to locate Wizoom anywhere in the house. A few hours later, however, loud noises and flashing lights emanate from the lab, causing Alby to get excited assuming the professor is coming home. Instead, the housecat hears strange voices coming from the triangular doorway, imploring him to be brave and “help them,” so Alby does what anybody would do in this situation when somebody important is lost, he enters the strange doorway in search of Professor Wizoom.

After getting spun through a tunnel filled with bright lights, Alby finds himself in a strange but beautiful land with glowing grass, an endless amount of multicolored flowers, and great forests as far as the cat’s eyes can see. Unfortunately he also notices that the doorway he came through closed behind him, and he’s unable to go back through, so he decides he must travel forward in search of the professor. Alby hopes the professor will be able to open the door, and get them safely back home. No sooner does Alby make this decision than he sees a wolf-like animal with wings flying in the air, and sitting on top of its back is a terrifying lizard-like man, with the head of a shark. This "man" is busy communicating to his wrist about trying to find the intruder that recently came through the gate into their world. Luckily Alby is able to narrowly escape being caught by the scary creature by hiding in a tree until it flies off in an angry huff, but he’s quickly confronted again by another odd-looking, less menacing animal, this time a frog with spotty green hair and a furry tail. The frog encourages Alby to eat something called a jumberry so they can properly communicate with each other. Alby agrees and immediately is able to tell the frog about going through a door in his world in search of his owner, Professor Wizoom, while the frog introduces himself as Fremmy the froguar, living in this land called Jumbalot. Fremmy decides that even though Alby is a weird-looking trespasser in Jumbalot, he will help the lost cat find the professor, and get back through the gates toward home. First, however, they must travel to the Kingdom of Jowla to speak with the special animals who will hopefully know how to get the ancient gates to reopen once again. While on their quest, the pair will become close friends as they encounter a plethora of brilliant hybrid animals including yetiguanas, tigeroons, and bearhinoxes, all in the magical kingdom of Jumbalot. But will Fremmy and Alby not only successfully find the lost Professor Wizoom, but also be able to get through the ancient gates back home, or will something far more sinister stop them in their tracks, and threaten not only their safety, but the survival of the entire land of Jumbalot?

Journey to Jumbalot is a wonderful tale for middle-grade children in search of a read that’s a bit different from the usual fantasy-based story filled with goblins, dragons or talking animals. After all, it is hard to resist not being excited dreaming of the images of powerful creatures such as the brave half-human, half-dinosaur, brontaurs, or the irresistibly cute half-frog, half-jaguar, froguar named Fremmy. Not to mention the fact that the actual story is packed with a wildly thrilling adventure, and is sprinkled with silly humor, that’s both easy to read and sends a few feel-good messages about bravery and perseverance. While enjoying Journey to Jumbalot, readers may crave a few more drawings of scenes within the story, especially of the hybrid creatures that are not depicted on the front and back covers. However, in the end I’ve come to believe that my imagination, and the imagination of future readers, will be far more exciting in creating our own ideas of what something looks like rather than if it were simply drawn out by the author. Therefore, let your imagination run wild and you’ll easily enjoy going on the adventure with Alby and Fremmy on their journey in Jumbalot.

Quill says: Are you craving a wild children’s adventure filled with unusual fantastical creatures? Then you definitely do not want to miss Journey to Jumbalot!

For more information on Journey to Jumbalot, please visit the website: www.jumbalot.com

Posted by FeatheredQuillBookReviews at 9:36 PM