#BookReview - The Greatest Hoax on Earth 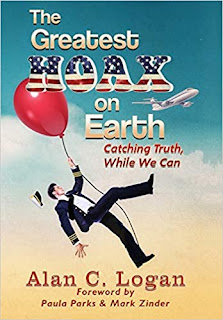 The Greatest Hoax on Earth: Catching Truth, While We Can

Who hasn’t heard the likes of Frank W. Abagnale or the iconic movie Catch Me If You Can? The twice-over millionaire peppered with a list of distinguished job descriptions and passing seventeen thousand bad checks—all under the age of twenty-one. What very few know is that the famous con man is really a con man extraordinaire. Logan unravels the truth of Abagnale, the man who sweepingly caught the attention of people internationally in his newest book, The Greatest Hoax on Earth.

The year is 1977—a time when the public shifted “appetite for sensation and infotainment over substance” (much like today’s news), and the world is looking for their next hero based on all things outlandish. One shining example is Evel Knievel with his daredevil stunts. Just as Knievel loses popularity, Frank W. Abagnale jumps in, running on the heals of this epic figure, starting with a sixteen-page dossier filled with audacious tales of his youth. Abagnale’s convincingly impassioned con-man-turned-conscientious story takes him from local Houston news to a contestant on the To Tell the Truth game show, springboarding him to Johnny Carson’s Tonight Show, which cinches his madcap-tales credibility and made him “America’s favorite con man.”

A year later, two different journalists—one from the San Francisco Chronicle and the other from The Daily Oklahoman—took it upon themselves to verify Abagnale’s story. Their investigations lead them to realize that the con man lied on top of lies and continued to fabricate stories. But since this was the pre-digital age, the not-widely-publicized articles paled against the well-established belief the public had about him. What unfolds is the truth about Frank W. Abagnale, which is “not the story of a teenage mastermind” but rather “the story of a troubled adult…”

Logan utilizes his sleuthing skills to trace the truth behind Frank Abagnale’s past. The Belfast-born historian includes over three-hundred bibliographic entries, not to mention primary-source pictures, and deftly weaves them into a story that is so much more than The Great Imposter’s life. While Logan unfolds the heroic attempts of the comprehensive 1978 investigations from small-town journalists to expose Abagnale’s fantastical claims, he also focuses on the people Abagnale took advantage of: most significantly, Paula Parks (Delta Airlines stewardess at the time), her family, and Mark Zinder, Abagnale’s booking manager, taking Abagnale’s tale back to 1969.

Well-written chapters incorporate storytelling and dialogue amid a flurry of facts. Logan adds an interesting element of leaving some chapters dangling while filling readers with chronological data before bringing them to a close.

Quill says: The Greatest Hoax on Earth is a shocking and eye-opening must-read for all, especially Abagnale enthusiasts.

For more information on The Greatest Hoax on Earth: Catching Truth, While We Can,please visit the website at: www.greatesthoax.com/

Posted by FeatheredQuillBookReviews at 9:49 PM