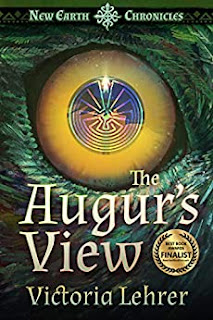 Author Victoria Lehrer has created a fantastical look at Earth some fourteen years hence, after a major Solar Flash has all but destroyed structures and systems and turned the governance of the Americas into a cold, totalitarian new world.

When we first meet Eena, a central character in this first portion of New Earth Chronicles, she has been taken to a grim underground bunker in the newly reborn town of Transtopia, in an area that once contained Colorado Springs. Eena is a prize catch for the recently devised Union of the Americas, possessing a certain genetic combination of former royalty (her father) and that of her working class mother. This combo is just what U.A. and its Imperial Governor Charles Scholtz need to produce and clone the perfect, docile worker race that will support the controlling regime. But Eena, no fool and no coward, soon escapes with a gun and heads out to find herself in a mystical realm, possibly the mythological land of Mu, where people raise, train and ride enormous, seemingly psychic birds known as augurs. She will use her own personal augur and her own acute understanding to find a way to protect and enhearten the “runners” – those in the wrecked world who are fleeing the U.A’s dictatorship, resolved to rebel against it.

The next person on the scene is Gavin, a once-cooperative township man who begins to realize that the only hope for himself and his people is to flee, to get under the literal radar and seek a cadre of fellow rebels. He and Eena will recognize each other as kindred spirits, though each will find potential mates elsewhere: Eena with the farmer Chas, and Gavin with the scientifically gifted Leslie. Nathan is a rogue member of Eena’s alliance, the Sovereignty Movement; a pilot sent by U.A. to spy on the rebels, he moves freely among them, unsuspected. On Thunderbird Mountain lives Matoskah, a Native American sage who offers tidbits of wisdom to the alliance. And somewhere in the mountains may be an ancient gateway that offers hope of renewal for all.

With a southwestern setting and some familiar places like Durango and the Continental Divide that play a part in the panoramic plot, Lehrer has constructed a multilayered allegory that cries for graphic dimension. The dynamic players range from scurrilous humans to semi-divine seers, and some powerful avian allies.

Quill says: With a lifelong passion for reading and teaching and a wish to give readers some powerful stories to contemplate, series writer Victoria Lehrer is poised to take a place among the greats of dystopian fiction and science fantasy.

Posted by FeatheredQuillBookReviews at 8:59 PM