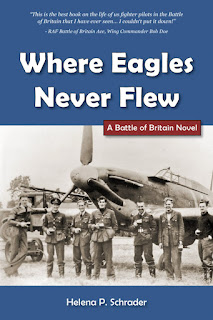 FQ: Helena, I have to say you have an absolute gift for bringing history to life. Can you start with what brought about the idea to re-release the book; and was there a specific reason you chose to change the title?

SCHRADER: Thank you! The compulsion -- which became an obsession -- to re-release this book was sparked by pure chance. I received an email from an Englishman asking where he could purchase one of my other titles, which I'd pulled out of circulation because a comprehensive re-write was underway. I suggested he might want to read one of my other books instead. He chose Chasing the Wind. Soon I was receiving emails from him saying "I CANNOT PUT THIS DOWN!" and similar messages ending with one saying the only thing wrong with the book was that it ended. But then, very gently, he asked if I would like him to edit it for "Americanisms" that had "slipped in." Knowing that British readers detest American English in the mouths of British characters, I readily agreed. He sent back more than a thousand corrections. Not the obvious things, mind, like "trucks" for "lorries" and the like, but the British preference for looking "out OF the window" rather than the American "look out the window" and such things.

Well, as they say, "in for a penny, in for a pound." If I was going to make that many corrections, then it made sense to go through the manuscript with fresh eyes and make other editorial changes as well. In the midst of this, I realized it was an anniversary year, and decided to (using an Americanism!) "go whole hog." I purchased the rights to evocative photos to lead into each section, and worked to reduce both the page count and, most important, the price. Since I've just launched my own imprint (Cross Seas Press) and I'm working directly with a distributor, I was able to reduce the price by $7 -- although, given the length of the book (590 pages) I fear some readers will still find it pricey. However, this time there will be an ebook edition, which will sell at $9.99.

As for the title, I love Chasing the Wind -- so do a lot of other authors. There are so many books by that title -- about sailing around the world, and wind energy and the like -- that my novel was completely lost in the heap. I felt I simply had to find a more distinctive title. So I returned to the poem High Flight by John Magee and paraphrased another line of the poem.

FQ: There are certainly gazillions of stories and books and movies about the Nazi’s; how were you able to make this so personal? The story is extremely human, showing the flaws that all of us have. Do you have family members who were perhaps a part of this battle?

SCHRADER: Not really, an uncle served as a navigator in bombers with RCAF later in the war, but I had no family involved in the Battle of Britain.

What enabled me to create realistic and complex German characters were literally years of research, including nearly a hundred personal interviews with survivors of Nazi Germany for my PhD in history. My dissertation was on a member of the German Resistance to Hitler, but naturally I interviewed many people who were not part of the Resistance, but merely family, friends, colleagues and comrades. I was living in Germany at the time and one interview often led to another, resulting in dozens of interviews not directly relevant to the topic, but all valuable for giving me insight into the society and how Nazism warped human interactions.

For the RAF side, I did many interviews and corresponded extensively with scores of RAF and WAAF for my books on women pilots in WWII and the Berlin Airlift. My research on the women pilots brought me into the homes of some of these remarkable women and their husbands (unsurprisingly) were almost invariably RAF pilots. Likewise, many -- indeed virtually all -- British pilots who flew in the Berlin Airlift had been in the RAF during the war. So talking and corresponding with these men and women enabled me to soak in the atmosphere and attitudes of the period.

Finally, the greatest inspiration for the characters came from the dozens of autobiographical accounts of the Battle of Britain written by RAF pilots. These include classical works such as Richard Hillary's The Last Enemy and Paul Richey's Fighter Pilot, both published during the war with all the intimacy (and censorship!) that implies, but also works by Douglas Bader, Philip Townsend, 'Johnny' Johnson, Al Deere, Bob Doe and others. These names will all resonate with people familiar with the RAF in WWII. I consciously included many incidents recorded by these pilots because the novel attempts to be as authentic as possible, and that is best achieved not by inventing, but rather incorporating history.

FQ: Females are often overlooked when it comes to historical non-fiction. These women you write about are amazing. Did this take a ton of research for you to get so close to these people that you were able to tell such personal, interesting stories? In addition, did you listen to real-life accounts while compiling this book? If so, were you in awe at what they had to say?

SCHRADER: Yes, I did meet, talk or correspond with a number of amazing women, particularly Edith Heap Kup, who graciously allowed me to use one of her personal photos on the cover of the book. She was a WAAF with Fighter Command during the Battle of Britain. She sent me her personal unpublished and handwritten memoirs and we corresponded for over a year, during which she endeavored to answer my many questions and steer me away from errors. Another wonderful woman was Diana Barnarto Walker, an ATA pilot, who welcomed me into her home and hosted me overnight while we talked and talked.

FQ: Do you have your own favorite character in this book; one that you would love the chance to sit down with and hear their story in person?

SCHRADER: Robin is without doubt my favorite character. One of my readers claimed to be "addicted" to "Squadron Leader Priestman" and keeps suggesting different theaters of war in which he could feature in a future novel. I feel much the same way, but I have to be reasonable about how much research I would need to do to, say, write a book about the Suez Crisis featuring Robin seconded to the Israeli airforce (so he could still fly Spitfires).

I'm also fond of Christian and surprised that he does not seem to resonate as much with readers. He features as a secondary character in my book about the German Resistance to Hitler.

FQ: You have written in other genres. Is there one in particular – or even one character out there that would be a work of non-fiction – who you yearn to write about in the future?

SCHRADER: Oh, yes. I have not finished my series about the rebellion of the barons of Outremer against the Holy Roman Emperor, and both John d'Ibelin and his son Balian are both historical figures/book characters I want to return to. Finally, before I die, I'd like to write a biographical novel about Edward of Woodstock and Joan of Kent.

FQ: How do you look at the world today, when thinking about the pandemic and society’s current issues? Do you see a better future coming soon?

SCHRADER: Let me see, the world's largest democracy has a president who is refusing to recognize the completely legal and uncorrupted elections that he LOST by almost five million votes. This corrupt dictator is being supported by members of the legislative branch, while the dictator fires competent ministers, destroys the professionalism of the civil service and undermines the security of the nation. Do I see a better future coming? NO, I'm thinking about the urgent need to re-release my novel about the German Resistance to Hitler because people need to know what they are facing in the future as this "cult of personality" destroys America and American democracy. Hitler was an upright and patriotic citizen compared to the cruel, egotistical madman currently putrefying the White House, who is willing -- literally-- to walk over corpses of his own supporters purely for power and self-engrandizement.

FQ: Do you have mentors of your own? Along those lines, do you have your own favorite authors out there that when one of their books come out you just have to read it right away?

SCHRADER: I've always been a fan of Sharon Kay Penman, but I couldn't get excited about her most recent book.

FQ: Readers and fans would love to know what project you are currently working on that we will (hopefully) see soon.

SCHRADER: I've just completed a little book -- two novellas actually -- about secondary characters in Where Eagles Never Flew that I want to release as sequel entitled Grounded Eagles. My next project (that addiction, remember?) is following Robin and Emily to Berlin and the Berlin Airlift. It's a wonderful, exciting story, which to my knowledge has rarely been the subject of a novel. That probably means there isn't much of a market for such a book, but since I've already done the research, this is a book I can get straight into.

FQ: Thank you for yet another great book!

SCHRADER: Thank you for your enthusiasm and the opportunity to talk about it. - Helena

Posted by FeatheredQuillBookReviews at 8:10 PM