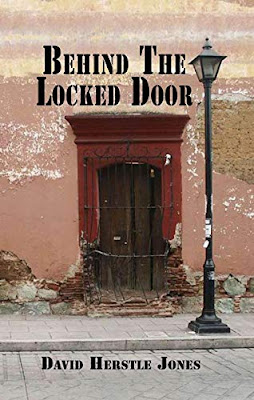 Today, Feathered Quill reviewer Amy Lignor is talking with David Herstle Jones, author of Behind the Locked Door.
FQ: How difficult was this book to write, since it was based on your own family’s situation? Did you find this to be a ‘peaceful’ or therapeutic process?
JONES: As I wrote in the Acknowledgements, writing the story was a long process. It took years although I knew almost immediately after my brother’s death in 1972 that I wanted to find some way to give him more life. I had my own life to live-career, family-and I had no writing skills at the time although I’ve always been a prolific reader. I was educated in math and economics. In retirement I found the time and worked on developing the skills. Writing was and is both an escape and thought-organizing activity for me. In answer to your question, writing this book was both peaceful and therapeutic though probably not for those around me, more likely frustrating and annoying for them. Writing, for me, requires complete concentration, silence and solitude. I suspect I was a real bitch to those around me although I didn’t know it because they were understanding and gave me the space I needed.
FQ: Your background is certainly strong in the economics/financial arena. How difficult did you find it to “change hats,” so to speak, in order to pen a book?
JONES: Actually, not difficult at all, but I did work with a couple of accomplished authors who pointed out my failures and pressed me to do the hard work that needed to be done. Over the years I’ve done a lot of writing-newsletters, newspaper articles, and I hosted a weekly radio show. That helped to hone my writing skills and to teach me how best to communicate my thoughts to others. I didn’t do fiction writing. I didn’t write a novel. Those were new for me. I began paying a lot more attention to how authors did their work, how good stories are created. I experimented for a few years with short stories and poems. My “juvenilia” started pouring out a little late at around age 60. I wrote a few terrible poems and stories in my youth and later when I was in college. I fancied becoming a writer but I didn’t know what that meant or required. I charged off in a different direction (like Professor Snipe in the book) and didn’t circle back until years later.

FQ: This, in a way, is a memoir. Can you tell readers a bit about your brother’s situation and how this book became an “idea” in your mind as a path to take?
JONES: My half brother and I grew up together. We had the same mother but different fathers. We lived with our mother in a small agricultural town in Northern California. My brother was 8 years older. We were extremely close. He became an attorney working at his father’s firm in Sacramento. I was in graduate school pursuing an academic career when he died. This was all worked into the book.
My father died 3 years before my brother and my half sister 1 year before my brother. My sister and brother were not related. I shared a father with my sister and a mother with my brother. A lot of terrible things happened to me more or less all at once including the stress of pursuing a PhD. I was heartbroken by the loss of my family. I left the academic world, moved to Mendocino, and went into the restaurant business. Years went by-marriage, children, grandchildren. The novel started brewing years ago. I wrote a few poems and stories setting down my thoughts. By the time I got around to writing the novel, I had a lifetime of experience that informed and enriched what I was able to write. So, in some ways the wait was worth it.
FQ: When it comes to your cast, were these characters in Mexico based on real people? If so, can you speak about the ‘spiritualism’ process that they personally have. Or, if these characters were fictional from your creative process alone, can you explain to readers about the shaman and the belief process they follow for healing?
JONES: I’m a Mexicophile, always have been. In the book Eric learns Spanish from a friend’s mother while in grade school. That was actually me in real life. I’ve traveled through and read extensively about Mexico. I have lots of friends there. The book has a long list of characters all meaningful to me. They’re drawn in part from actual experiences but mostly entirely fictional. I used real names but not real lives. Itandehui, my curandera, is the name of a young girl and her aunt. When I told them I used their name for my curandera they laughed: “We’re as far away from that as you can imagine.” I know very little about shamans and curanderas but witnessed a few such activities in my travels. I also read quite a lot about traditional healing methods. You may not be old enough to remember the Dragnet TV show. That show always started with “Ladies and gentlemen: the story you are about to hear is true. Only the names have been changed to protect the innocent.” In my case many of the names are the real names of friends but the stories and characters are complete fictions. I did do a fair amount of research on the Kumeyaay Indians of Southern California and I used some of what I learned in an altered form. Oddly, while I’ve been all over Mexico, I’ve never been to Tijuana where much of the story takes place. I carefully studied everything I could find about Laetrile. Some of the characters were based on that. Nothing was based on my brother’s legal cases. I’m not spiritual or religious at all. I was raised Catholic. That comes out in the book but I gave up organized religion long ago. One important character, Hector, was influenced by a William Castle movie, Mr. Sardonicus. The book was inspired by many other writers. The most important are mentioned in the Acknowledgements. The Stanford Medical Center Riot was a real historical event as was the Senate hearing on laetrile but all the characters were fictional.
FQ: Was the hard-boiled crime plot pulled from any of your brother’s cases, or did this come from your own personal passion to write this type of genre?
JONES: The hard-boiled crime plot was fictional. I based it in part on the research I did on laetrile. If you read the literature on laetrile, it’s populated with many nefarious characters. I created Krump, Napier, Zacco and Congressman Shipley out of that research. The Catholic priest was based on a real priest whom I read about. Louie Frieze, the curmudgeonly chemist, was a pure fiction I dreamed up one night when I wrote in a frenzy almost word for word as he appears in the book. Marcos was also fiction and also appeared unedited nearly intact. Likewise Penalt. I really love my characters. I still think of them all the time.

FQ: What are your views in regards to the ‘scientific’ part of medicine versus the ‘spiritual’? Do you believe healing could go further if people would expand their own minds to accept things they may not understand?
JONES: I’m more or less with my character Napier on that (i.e scientific) but not as heartless or plotting. I don’t believe in Naguals but I wish I did. What I know about them I learned in Oaxaca from the Zapotec artists that make the painted wooden animals, wool rugs, and the ancient stone temples; also the Huichol artists that live in Jalisco and Nayarit. Whether or not healing could go further if people would expand their own minds to accept things they may not understand I don’t know. But they should expand them anyway. That’s what makes life worthwhile.
FQ: Could you speak a bit to our readers about your Think in the Morning blogsite?
JONES: I set up Think in the Morning five years ago when I retired from financial advising. It was first a place to write about and document my days at the Sea Gull Restaurant in Mendocino, a popular gathering place in the 70s and 80s. One part of the blog is a virtual gallery of napkin art (art on cocktail napkins produced by bar patrons mostly local artists when they visited the bar). Later the blog evolved into a place to gather my thoughts on various subjects. More recently it’s been a place where I introduced my novel. On occasion I put up guest posts from friends, even a few from my grandkids. I now have 5 years and nearly 400 posts.
FQ: What would you say was the most fun part of the writing process, and the most difficult aspect of it when you look back on the book’s creation?
JONES: Creating the characters and allowing them to live was by far the most fun. They still live in my mind where they were created. One author/philosopher I’ve read and enjoyed is Miguel de Unamuno. In his novel Mist (Niebla or Fog) one character carries on a discussion with the author. It was the first time this technique was used I think. I have had many such discussions, very enjoyable. The hardest part was to follow through each scene to the end. I lack patience and usually cut things short only to realize or be told that I need to do more. Dialogue was hard, I’d never done it before and my first attempts were embarrassing. A sense of accomplishment was my reward, witnessing thought made real.
FQ: Do you have a specific genre that you’re interested in reading? Along those same lines, is there a genre you would like to write a book for in the future?
JONES: I have pretty wide interests. Good fiction of course but also biography, history, science and even economics. I have a number of short stories in various states of completion that I’d like to tighten up and maybe share in another book. I also have an idea for a short novel about a young girl (about 4 or 5) I saw on a bus in northern Scotland when I was in my late twenties. I only saw her once but her face stayed with me. I’ve imagined over the years what her life might have been like and how it might have changed under certain circumstances. I think about it a lot. I will leave details to the book if I ever write it. I enjoy writing immensely and hope to continue as long as I’m mentally and physically able.
FQ: What would you like readers and future writers to know about your journey through writing/publishing Behind the Locked Door? And what comes next?
JONES: I answered some of that in the question above. As for future writers I’d say if you really want to write, then do it. Don’t be afraid to ask other competent writers for help. I did and could not have finished without that help. It’s expensive to publish a book, and for me it took a long time, not a great source of income in most cases. But, it’s good to help you “go further” and to “expand your own mind” and to “accept things” you “may not understand.” That was the case for me anyway and I’m very happy I stuck with it.
Posted by FeatheredQuillBookReviews at 2:53 PM