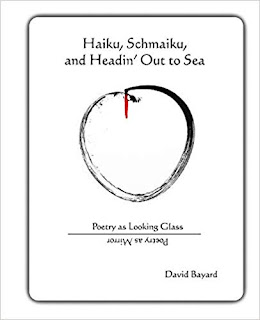 Haiku, Schmaiku For Headin’ Out to Sea: Poetry as Looking Glass, Poetry as Mirror

Poet David Bayard writes with boldness in his second book, Haiku, Schmaiku For Headin’ Out to Sea.
Wordsmithing appears to go hand-in-hand for poet David Bayard. If his debut book, Gathering the Self: Poems of the Heart, provided readers with a hint to his prowess with the written word, that is nothing compared to his latest work. While his first book looks inwardly, reflecting his life most regularly through nature, Haiku, Schmaiku For Headin’ Out to Sea expresses an affirmation outwardly to follow his gift of verse and rhyme, and to do it boldly.
A collection of seventeen haiku (“one for each syllable of a haiku”), twenty-four poems, and two ballads, Haiku, Schmaiku For Headin’ Out to Sea reawakens one’s youthful senses—all things nature, introspection, and self-exploration—that are often lulled to sleep when busyness accompanies adulthood.
Bayard’s reflective subheading of Poetry as Looking Glass/Poetry as Mirror gives readers a hint as to where Bayard plans to head on his journey-through-life-based theme of exploration. Writing on a range of topics—from rabbit holes, flying metal boxes, deceased loved ones, and churches to the Moon, squirrels, and even sex and underwear, Bayard punctuates his witty haiku with poems shaped in a combination of freeform and couplets. Two ballads turned to songs (musical notation included) titled “Sailor” and “Sea Shanty” open and close his beloved tome divided into three headings: “Looking Glass,” “Double Lens,” and “Mirror.”
The carefully-considered captions progress from—how this reviewer perceives it as—awakening and obscurity to maturity, respectively. His work, enhanced with his black-and-white drawings and photography, slowly but deftly builds up to sort of a musical crescendo, announcing a dual-encouragement to readers to write poetry and to be themselves. A great example of this is in “The Trees.” Here is an excerpt:
“The trees they are my champions.They raise their arms to take me in.They see my cloud of doing,Cloud of worry, and they wisely speak outDavid,Shed our skin.Come into being, world of grace, and raise your arms toHeaven.There is no other place to be than now and her.You knew but have forgotten,those times when you have anxiously been holding.”
Quill says: A quick, delightful read, Haiku, Schmaiku For Headin’ Out to Sea is exhilaratingly thought-provoking and encouraging.
For more information on Haiku, Schmaiku For Headin’ Out to Sea: Poetry as Looking Glass, Poetry as Mirror, please visit the website: skyboyphotos.com/collections/books

Posted by FeatheredQuillBookReviews at 11:05 AM