#BookReview - To Hell with Johnny Manic 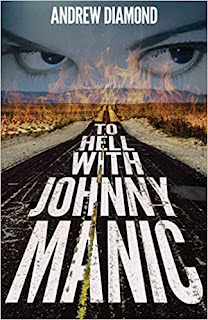 To Hell with Johnny Manic

More haunted than hunted, a man on the run meets a beautiful, dangerous woman who shares his need to be somebody else. But does being somebody else mean killing anyone who threatens your disguise?
Early in this gritty first-person narrative, Tom Gantry admits that his current moniker - Johnny Manis – is not his; he has assumed the guise of a man who gained and then rejected fame. When we first see him, the man known as Manis is coming off a massive gambling binge. Then he gets a chance to do easy but well paid work as a computer fixer for wealthy clientele in a pleasant rural town. He jumps on it, having more than one reason to want to start a new life. But on his first day in town, he falls under the spell of a woman who will lead him into a maze of deception that exceeds anything even he could have schemed up. Wife of a well-known corporate magnate, Marilyn easily seduces him, dubbing him Johnny Manic. She slowly drags him into her evil web with tales of her faltering marriage and suspicions of her husband’s plot to get her out of the way so he can live with his new mistress.
Looking on is a smart, doggedly persistent town cop named Lou, who has his own suspicions. He begins tracking Manic, making him feel hemmed in on all sides. Added to Manic’s trouble with the police is the mysterious alter ego – the real Manis - that is grabbing increasing control of his mind. In love now, Manic is bullied by his shadow self and seized by fears from his past. He feels he must help Marilyn, not aware of the true deviousness of her intentions.
Award-winning author Andrew Diamond has created a tough, twisted tale of distorted dreams and evil plans going wrong in every direction. Anti-hero Gantry is likeable enough, trying in his blundering way to do the right thing while falling deeper into a hole of his own digging. The cinematic plot is thoroughly engrossing, with tortuous turns and all the wrong characters showing up at all the wrong times. Manic’s work assignments with a varied cast of colorful customers provide a few breaks in the unnerving, rapidly escalating scenario of deception piled on deception. The cleverly conceived aspect of dual personality - Manis slowly gaining sway over Manic - adds a fascinating layer. Diamond manages all these threads deftly, with subtle humor and a wealth of forensic and personal detail.
Quill says: With rapidly changing action in every chapter and psychological undertones, To Hell with Johnny Manic is very likely to garner new fans and further recognition for mystery writer Andrew Diamond.
For more information on To Hell with Johnny Manic, please visit the author's website at: adiamond.me

Posted by FeatheredQuillBookReviews at 7:48 PM