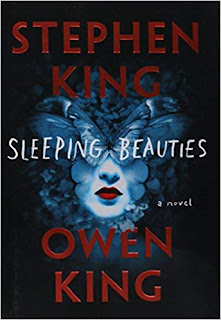 
A world where all the women have fallen asleep, wrapped securely in cocoons, while the men fight it out in a somewhat barbaric fashion takes center stage in a novel co-written by the father-and-son team of Stephen and Owen King.

Sleeping Beautiesopens in the small town of Dooling, somewhere in Appalachia (surprise - not Maine!), where the local sheriff, Lila Norcross, keeps tabs on the petty crimes common in rural America. Her husband, Clint Norcross, is the senior psychiatric officer at the Dooling Correctional Facility for Women. They have a son, Jared, and are relatively happily married. After several chapters where the authors introduce the various players in this novel (and there are a lot of them!), the action starts. It seems there has been an accident at a local meth spot, that is quickly re-dubbed a multiple murder site. As Lila is rushing to the scene, she almost hits a woman on a side road. Stopping to help the woman, Lila soon handcuffs the strange woman when it becomes apparent that this unusual person is on some type of PCP...or something and is in need of help.

Evie, as the strange woman is dubbed, is taken to the women's prison for evaluation. At the same time, a strange affliction has taken over women on the other side of the world...and is quickly making its way to the United States. When women, and only women, fall asleep, they are enveloped by an odd white cocoon of a weird, sticky substance. They continue to breathe, and appear unharmed, but if disturbed, and the cocoon is ripped open, these women become extremely violent and kill everyone near them. As the virus, plague, or whatever it is, advances toward Dooling, Lila and the other women struggle to stay awake.

One by one the women in Dooling fall asleep, as the town erupts in chaos. Like the others, Lila eventually succumbs, and with that, Part One of this novel comes to an end. The second part deals with the men as they break up into two camps - one at the prison that is willing to risk all to protect Evie, who they are convinced is at the center of the outbreak, now called "The Aurora." The other group of men, led by a somewhat violent man determined to save his little girl and free her from her cocoon, is convinced that Evie needs to be captured, and sent to the CDC, or maybe killed or...? As the battle at the prison heats up, the reader learns that the women who have been "cocooned" are not dead, but instead have been transported to a parallel universe or perhaps a time in the future (it's not really clear and left up to the reader to figure out). They establish a civilization and seem to be living in an almost perfect place. But as often happens, things do go wrong.

The premise of Sleeping Beautiesis definitely unique and makes for a fun read. Now in development for a limited television series, it's no surprise as the typical "creep factor" so common to King's novels is present. Some readers may not like the fact that we never learn what, or who, Evie is, but rather are left to speculate on some possibilities suggested by the authors. Readers familiar with Stephen King's writing will likely notice a slight difference between the storytelling here as his son Owen takes on much of the tale (it was Owen who came up with the original idea). The novel is long, at slightly over 700 pages, and there are sections that seem to drag a bit, such as the battle at the prison. That's common in many of King's novels, and something most of his fans are willing to overlook. As previously mentioned, there are a lot of characters in this book and perhaps because of that, the character development is a bit lacking. But overall, it is a fun, unique novel that follows the format that King is so well-known for that will satisfy his readers.

Quill says: While not the "best of the best" of Stephen King's novels, Sleeping Beautiesis definitely a satisfying read for fans of the "King," and of the genre.

Posted by FeatheredQuillBookReviews at 2:13 PM