#BookReview - In the Shadow of War 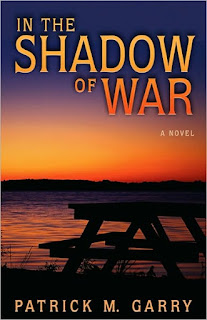 In the Shadow of War


Patrick M Garry creates an emotive, microcosmic atmosphere against a backdrop of national conflict in his new book In the Shadow of War.

In the Shadow of Warcenters on narrator Glen Kinsella, recalling his younger years. As the story opens, it is summer, 1970. Glen is a recent high school grad who grew up shepherding his mentally deficient brother Ricky, who recently died in a freak accident for which Glen feels responsible. Despite his special needs, Ricky was charming, with amusing speech patterns and a fascination with Martians that came from watching sci-fi movies. From his years with Ricky, Glen learned that contact with such people could bring out your meanness, your sense of playfulness and your deepest affection. Every year the two boys were dropped off by their parents in Corcoran, a tiny “blink-and-it’s-gone” town occupied by their Grandpa and a few other diehards who were trying to keep the town’s ambience alive. Ploughing the fields for meager crops and arranging an occasional burial in the Corcoran cemetery, Grandpa hits on the idea of reviving the town with new blood. He invites three women to move in: all are married to soldiers deployed in Vietnam, one of them, Sharon, already a widow.

Glen, in his first summer without Ricky, is swept up in the lives and histories of these women and of the vets who occasionally come for picnics. But two visitors will change Corcoran – and Glen – forever: former soldier Will, who has dark news to impart, and Suzanne, a footloose young woman with a secret she feels she must hide, especially since she and Glen are falling in love. And around all of them, a sinister plot is underway for destruction of the town they all call home.

Garry’s intriguing novel interweaves one boy’s coming-of-age drama with the memories, conversations and interactions of a gaggle of diverse characters. Glen’s recurring recollections of his time with Ricky provide a kind of playbook for his current exploration of the world of adulthood that he soon must enter. As the summer passes, the boy also learns more about Grandpa’s deep attachment to Corcoran. The potent framing for this elaborate interpersonal tapestry is the Vietnam War. Protests against the war are mounting, and protestors come to Corcoran, affecting and afflicting its newfound collection of war wives, widows and survivors.

Garry, an award-winning novelist and professor of law, has constructed a sensitive, intelligent story redolent of the times, bringing the Vietnam War to Corcoran through the conflicting feelings and opinions of the community. At times there are too many small mysteries, questions and solutions in confluence, leading to a crowded feel. But as regards the central theme, readers with ties to those difficult times will appreciate how judiciously the author presents varying viewpoints without forcing the reader to take sides. When Will expresses what Nam was like for the warriors, he could as easily be speaking for those back in the US watching the action on TV each evening: “You never knew where anything was going, or how anything would work out.”

Quill says: Garry has created a memorable snapshot of a divisive era in our nation’s history, revealed through the eyes of realistically conceived characters who, no matter the outcome, have much to gain or lose.

For more information on In the Shadow of War, please visit the author's website at: patrickgarry.com

Posted by FeatheredQuillBookReviews at 1:07 PM