FQ: You note that one of the things that separated your impersonations from others was that you came up with a "rapid fire" method of going from one impersonation to another. Would you explain this to our readers? Was this an intentional method, taking months (years?) of practice?

LITTLE: I've always had the ability to switch from one person to another. Most of the people before me used to turn around, get into character and then turn back to the audience. I didn't need to do this.

FQ: Did your parents support your career choice before you "made it big," and were they impressed when you made it to "The Judy Garland Show"?


LITTLE: My father passed at the time. My mother was very supportive, but she was more interested in what I was going to wear during the show.

FQ: I absolutely loved the Jack Benny/NBC Chicken Soup story. What was going through your mind when that was happening?

LITTLE: Jack was very finicky. He was more interested in the little things in life, like food and the weather, than he was in his career. I was just happy to be in his company. He was not a stingy man. In real life, he was very generous.

FQ: You mention in your book how generous Alan Ladd was to you and your brother, and how Richard Todd had no time for two kids who wanted his autograph. When you've had a long day and just want to relax, but a fan comes up for just one more autograph, does that day so long ago with Mr. Ladd keep you going?

LITTLE: Always be nice to your fans, even if you're not in a good mood. It means a lot to them, and I never forget that they're the reason for my success. To be fair, Richard Todd might not have even known that I was out in the hallway waiting. That may have come from his manager.

FQ: It was so enjoyable to read about celebrities who lived up to their "nice" image. Was there a celebrity who enjoyed such a reputation but who you found to be less than what their image projected?


LITTLE: Paul Lynde was not the man everybody thought he was. He was very unhappy in his private life. His attitude off the set was not very good.

FQ: In your book, you talk about impersonating Richard Nixon - and the day you had to do the impersonation right in front of President Nixon. Would you tell our readers what that was like?

LITTLE: I don't think President Nixon knew what I was doing. He had no sense of humor. He wore the same dark suit for his whole career and never took the hanger out of it.


FQ: Was there ever a person who proved too difficult to impersonate? Somebody whose voice or mannerisms you just couldn't get right? Or, that you did get right, but it took longer than usual?

LITTLE: I could never do Robert Redford, Harrison Ford, or Michael Douglas. They were all great actors, but not very distinctive voices. If ever I could have done Marilyn Monroe, I would have jumped myself.


FQ: In 1976, you starred in "The Rich Little Show" (not that somebody else would star in the show), a weekly television show. Was the pressure intense to put out a weekly show? And did your other appearances suffer because of it? Any fond memory of the show you'd like to share?

LITTLE: When you do a weekly television show, you're always in a hurry. Sometimes because of the time element, you're not completely happy. I liked working with Charlotte Ray, but I think my shaggy sheep dog Dudley stole the show. He was hoping for a spin off.

FQ: You have "hobnobbed" with both celebrities and politicians. Which do you prefer to hang around? Are both groups equally happy to have you impersonate them? (I realize this could be a vast generalization but thought it would be fun for our readers).

LITTLE: Politicians are more fun to impersonate because they think they're smarter than they are. When you make them say silly things, people like it. It was the same with my teachers.

FQ: Is having "Rich Little Drive" in Ottawa, Canada a highlight of your career? 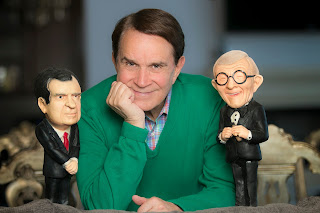 LITTLE: No, it was not the highlight of my career - it was a dead end. But Paul Anka Drive was shorter.

FQ: You're quite active, currently appearing in Las Vegas. Would you share with our readers a little about your current show?

LITTLE: I'm now doing a show in The Laugh Factory at the Tropicana Hotel and Casino. It's based on my career. I use film clips of the actual stars, and I show a lot of my art. I started drawing before I ever did impressions. 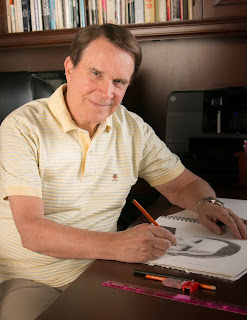 FQ: Mr. Little - I'd like to thank you for your time and for writing such a fun book that brought back so many fond memories of both movie stars I've adored for years, as well as watching your impersonations of them. Thank you for bringing so many smiles to so many faces over the years. - Ellen Feld

LITTLE: Thank you for your kind review. I'm very appreciative. Unfortunately, many of my friends have not read my book.They can't read.

To learn more about People I've Known and Been: Little by Little please read the review.


Posted by FeatheredQuillBookReviews at 8:08 PM