FQ: Most Westerners are not familiar with Indian culture and practices, especially ones that have been outlawed quite some time ago like suttee. What did you hope to accomplish when you began writing The Last Suttee?

WANGU: I wanted to let people of India and the world know that rituals like suttee and similar social traditions, that suppress women, continue to persist in many cultures. I wanted to write socio-economic and cultural reasons of the ritual, put it within the context of modern India and give voice to the ritual murder of a widow. Even one such horror is one too many.

FQ: I read a bit about the suttee of Roop Kanwar in 1987, and was surprised to discover that eleven people were originally charged with glorifying this ritual, but then nearly seventeen years later, in 2004, all were acquitted of the charges. What is your opinion on this new ruling that caused a total reversal of charges?

WANGU: No opinion, just rage! It is good that I channelized my anger and exasperation into the creative act of writing The Last Suttee. Otherwise I would have been living a life of unease with my anger and frustration. I am better at writing than at protesting or staging a sit-in.

FQ: What was the most difficult aspect you were faced with when doing research for The Last Suttee? 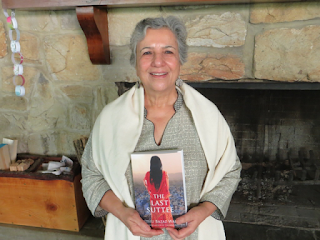 WANGU: Meeting and questioning the perpetrators of the ritual murder of Roop Kanwar, including her father-in-law, brother-in-law and his wife.

FQ: Do you believe that the funeral ritual, suttee, will ever be completely eradicated, and if so what do you believe needs to occur to make that change?

WANGU: Eradication of suttee and similar rituals is as complex as eliminating sexual exploitation or drug abuse in a society. They are deeply embedded in people’s psyche. But speaking optimistically, if government intervenes, provides education for free, if people use the internet to make their friends and family aware of social evils and perils of injustice and discrimination so that perpetrators as well as victims are exposed, things are bound to change for the better.


FQ: As a woman I really enjoyed the main character, Kumud Kuthiyala, and appreciated her courage and tenacity, especially when attempting to change the centuries-old beliefs about women (especially widows) in Indian society. Do you have any plans on writing another novel that would include her future endeavors?

WANGU: Not until I read this question! Currently, I am writing a non-fiction book and my second collection of short stories. But you have given me an idea. I might write a novel about Parvati’s work at SGSO with abused and abandoned women, or Alka’s work with girls who flee homes to become actresses in Bollywood. 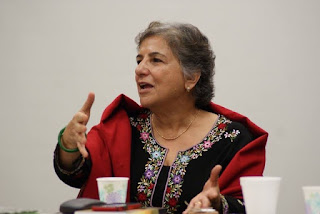 FQ: In the foreword of your book you mentioned that you participated in National Novel Writing Month (a nonprofit that encourages writers to complete a 50,000-word novel in the month of November) in 2009. Do you think participating in this helped motivate you to continue editing and rewriting, and would you recommend that new writers participate in it to help kick start their writing aspirations?

WANGU: Absolutely! Without NaNoWriMo challenge I may never have written novels. Writing extempore without any inhabitation or fear I poured out 66,000 words in November 2009. The feeling that thousands of other writers around the globe were also participating was a propelling force. Motivational posts by renown authors and by previous participants who had become published authors kept me going. Their pep talks not only stimulated while I was writing in 2009 but inspired me to write drafts of two more novels in 2010 and 2011.

FQ: According to your biography, you were a professor of arts and religions in several universities before deciding to become a full-time writer, and then in 2010, you founded the first Mindful Writers group. What inspired you to move towards a life of writing, and can you explain to readers what mindful writing entails?

WANGU: Teaching Hindu and Buddhist art did not fulfill me the way writing fiction does. In my novels, I can express my thoughts and pour out my emotions. However, teaching taught me significance of being aware of myself, delighting in simple joys of life and treating life’s trials as passing events. 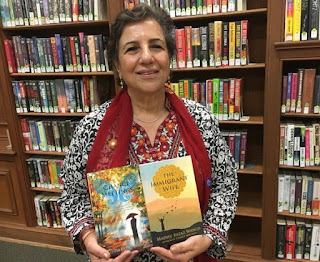 Thirty years ego my daily routine was set: Meditation, journaling and writing my work in progress. The days I did not follow this routine, I couldn’t write with as much gusto as when I did. I felt as if there was a brick wall separating me from my creative flow. And the days I practiced my routine the fount was fluid.

FQ: Are you currently working on any projects that your fans can look forward to reading in the future?

WANGU: I’m working on my second set of stories and a non-fiction book, Writing and Living Mindfully: A Guidebook. If you would like to stay informed about this or any other details please visit my website: www.madhubazazwangu.com

To learn more about The Last Suttee please read the review.

Posted by FeatheredQuillBookReviews at 9:17 PM