FQ: Several years went by before you “remembered the promise made to” your friend regarding writing your personal spiritual journey. This came at a time when you experienced writer’s block while attempting to work on your next fiction novel. In retrospect, would you say the writer’s block was happenstance, or divine intervention? Explain.

WILDER: There is no doubt that what felt like writer’s block was instead a shove from the Holy Spirit. I say shove because I believe writer’s block to be a myth. If the words don’t flow, there is something going on...usually, fear. However, in this case, I was eager to begin on the revisions for my 3rd novel, I had gotten over the initial hemorrhaging from the editor’s very critical review and was ready to work. By nature, I’m a perfectionist. And can be obsessive about deadlines. The fall deadline loomed in front of me. The fact that this was taking place during Lent finally dawned on me. And I began to pray...ask for help. It was then that I remembered the promise. And then the mental version of...”Oh no, you have got to be kidding, really?” hit like a ton of bricks.

FQ: In chapter four you state, “most of my listeners have been lifelong Catholics or Christians and have not experienced living life without faith.” How do you define faith? Explain.


WILDER: St. Paul uses this definition: “Faith is the realization of what is hoped for, the evidence of things not yet seen.” A far more poetic definition than the one I used to use. During the years when I was invited to speak to Catholic audiences about my conversion, I would use the ground I stood on as an analogy. Early in the talk, I’d stomp my foot very hard on the floor (It worked best if standing on an uncarpeted one.) Without fail the echo woke up my listeners. Once I had their attention, I said, “life without faith is like living without gravity. We float in the air without boundaries, all things are permissible.” Quoting Dostoevsky.

FQ: How do you maintain a balance between Jesus as your friend and a healthy fear of God, or is such a balance even necessary?

WILDER: What a great question!

Early in the book, I quote a Legionary of Christ priest who opens the weekend retreat with this prayer. “I pray that if Jesus Christ is not now your best friend, that by Sunday night, He will be.” And then I write about the terror evoked by that comment. That terror I felt is, of course, an unhealthy fear. But facing it and the darkness in us is an essential first step in establishing a friendship with the three persons of God. Over time, the fear evolves and becomes what the writers of the Old Testament had in mind with the phrase, “Fear of God is the beginning of wisdom.” A fear comprised of love, fervent desire to please, to obey.

FQ: You mention that you personally embrace the Roman Catholic’s stance on abortion. In your public lectures, how do you address hard questions, such as impregnation as a result of incest and rape?

WILDER: I cannot speak to those questions because I have not experienced any of those things. I can speak about abortion because I had one. Did it despite knowing I was killing a baby. Yes, I believe in the stance of the Catholic Church on these things, including contraception. To be a Catholic means that I obey the Church’s teaching in all things. However, what all too frequently gets lost in the polemics of ideology is the reality in which a person chooses sin...knowingly because they feel they must. Over ten years ago, I had a conversation with a priest I believed should be my spiritual director. But I did not know him. Looking back, it is clear that I was testing him.

Fully aware of the Church’s teaching on contraception and of my fear that were I of child-bearing age, I could not comply with it, I asked the priest what he would do if I came to talk with him about my desire to use contraceptives at thirty- something years of age, “What would he tell me?”
He answered that his job as a priest was to make sure that I understood the teaching of the church and the reasons behind it. But that my decision was between me and God. Indeed.

What isn’t understood by those looking in at the Catholic Church is that we know we’re sinners, that is why we are there. But these ideological arguments dissolve into silly divisions and labels and blur the truth. Most of us have no idea of what we would do until faced with the decision, decisions of consequence like abortion and contraception. Only then do we really think about it, because we must.
In a way, these ‘issues’ are kind of like the gun control argument. Until I listened to a good friend describe her experience with two men breaking into her apartment one night, I believed that no one should have a gun. In lurid detail, my friend described that night. Each man took his turn with her, over and over. Knowing that her two little boys were asleep in their room, she was unable to scream for help. My anti-gun control ideology died during her horrific tale. Ever since I have owned a hand gun-just in case.

FQ: You describe three significant encounters with the Holy Spirit in the form of a brilliant light. Have you had any further encounters since the publication of Finding the Narrow Path? And if so, explain.

WILDER: Since then there have been no visual images. But not infrequently what St. Teresa of Avila terms locutions or words heard in my psyche, fully formed. The most dramatic was several years ago while exercising on my Precor in my garage. A command to spend time at a mission outside Tijuana with a priest friend. The internal argument was somewhat lengthy because each time I have visited Mexico as a tourist, I got progressively sicker. You know, the kind of illness that makes you afraid that you won’t die? But the ‘voice’ was insistent. I went. More recently, this last April, I was walking with my dogs saying the Rosary. And was lingering on the interchange between Pontius Pilate and Christ where Pilate asks, “What is truth?” Unlike all the homilists I’ve heard speak about this interaction, I’ve never thought his question sophistry. Instead, I’ve identified with the guy. And for the thousandth time since I learned about Pilate, stuck there. And heard, “Your next book will be about Claudia.” Again, the inner argument, “What? That’s historical fiction! I don’t write historical fiction!” I heard, “The title is, I, Claudia.”

FQ: A priest remarked to you, “We are redeemed, sinners. Bought and paid for by the blood of Christ.” I find your response interesting: “I find there are two kinds of Catholics. The first type emphasizes the redeemed part of that equation by ignoring sin, the other, usually converts, like you [the priest], focus on the sinner side of that equation.” Do you believe this type of thinking is limited to just Catholics?

WILDER: No, probably not. I suspect all converted Christians feel the weight of their former sins far more than do those who have lived their lives – or tried to- according to the commandments.

FQ: One aspect that you briefly cover is the area of “forgiveness.” What importance would you say forgiveness has in one’s life as he or she is searching for spiritual truth?

WILDER: Forgiveness is imperative. We are incapable of movement without it. Learning to love ourselves begins there, forgiving ourselves. Just looking around shows us that despite all the medications, increasingly sophisticated ways to distract ourselves, many of us – perhaps most - dislike, maybe hate ourselves. That 2nd commandment, “Love your neighbor as you love yourselves,” is so weighty. But we focus on the first part. The movie, The Shack brilliantly demonstrates the strange paradox that our inability to forgive another rests on our inabiltity to forgive ourselves. 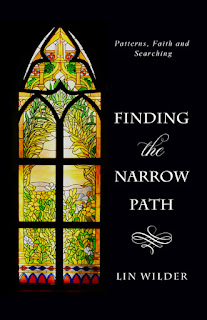 FQ: What one piece of advice would you give to a person to get him or her started in their search for spiritual truth?

WILDER: Wow. I guess it would be one phrase, admit the need for it...something more, Someone greater. Maybe on your knees somewhere. Then write it down. Then don’t stop until you get there.

FQ: Do you have any writing projects in the works?

WILDER: Yes, I am working with my editors on the revisions for the 4th novel in the Dr. Lindsey McCall medical mystery series, Malthus Revisited: The Cup of Wrath. The book will be released within the next several weeks.

FQ: Do you foresee writing any other nonfictional works?

WILDER: Yes. I write non-fiction articles weekly at my linwilder.com blog and publish articles regularly at Catholic365.com. Occasionally I also do guest blog posts. I like non-fiction, it is lots easier than fiction!

To learn more about Finding the Narrow Path: Patterns, Faith and Searching please read the review.


Posted by FeatheredQuillBookReviews at 5:17 PM