FQ: In 2008, Jerry dealt with his symptoms and flashbacks. Can you describe, from your point of view, PTSD and what it’s like to live with that? And how, at one time, Jerry felt like he’d rather go back to war instead of walk into a VA hospital?

HALL: PTSD is a very insidious condition. I did a lot of spouse therapy at the VA to learn about it and how to deal with it. Understanding triggers was huge for both of us. I learned that he needed the seat in the corner with a clear view of the exit wherever we went because he was hyper alert to any danger and needed an escape route. When we flew he made me count the rows to the exit. He couldn’t stand to be told what he could and couldn’t do from someone in authority so I learned to deal with any inspector, etc and shield him from those situations. I took on the role of protector unknowingly because I knew what caused him stress.

He talked a lot about going into the VA hospital the first time in the late 1970’s. He said he really believed he was crazy, had no capacity to love and would never fit into the world here. In war he was respected and knew how to survive. Here, not so much. But he did go in, he was determined to do whatever he could to be a healthier person.

FQ: Emotionally, “Sky King” sometimes feels like Jerry’s alter ego in this book. Did he ever
mention this title of his at all? Is there one specific battle that Jerry spoke about often?

HALL: He grew up watching Sky King, who was the calm hero from the air that I think Jerry wanted to be. Sky King saved people, Jerry’s job was to coordinate the safety of his brothers in trouble on the ground. But Sky King always won and picked his own battles.

Jerry talked about his first solo strike mission a lot, he was supposed to be call in hits to a so-called enemy base camp (really just a swamp somewhere) when he got a T.I.C. (Troops in Contact) alert and went out on a limb as a newbie to deal with it. End result – the contact was broken and all ok. He goes into detail about it in the first volume of Yes Sir.

FQ: Did Jerry ever miss his sanctuary? Being able to fly?

HALL: In the beginning he said he did. He didn’t want to be an airline pilot because he said that was bus driving and he would be too tempted to try a barrel roll and give the passengers their money’s worth. He wanted to be an instructor pilot when he got out but had a bit of a run in with the civilian instructor pilot who claimed to know more than Jerry about flying when he had a hundredth of the experience Jerry did. Jerry didn’t appreciate being called ‘one of those military assholes’ either. He didn’t fly again.

FQ: Jerry delves into everything from his mental and physical decline to his thoughts in regards to war. Changes occurred, with later Hall generations marrying refugees. How are they all today?

HALL: They are all fine – Jerry was so proud of the full circle and welcomed the spouses and of course grandchildren with open arms.

FQ: Jerry’s story will help many who are still suffering from the trauma of war. Are there any book tours or talks scheduled where this book is concerned?

HALL: I am hoping to do a talk/event this winter in the south Florida area with some vet groups.

FQ: To end on a lighter note: I must ask, because I believe this is such an incredible story it should be seen by as many people as possible, who do you think would be best to play Jerry in the movie version? 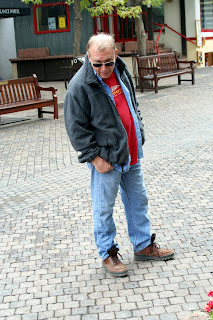 HALL: We used to joke about this! In a perfect situation we thought a young Matt Damon to play Jerry, a young Richard Dreyfuss is Father William’s doppelganger. I like Ryan Gosling and I solicited advice from friends and added Zach Braff and Tom Hardy to list.

Posted by FeatheredQuillBookReviews at 12:43 PM