Book Review - A Spirit In Motion 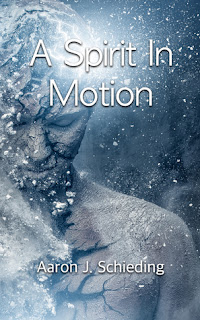 A Spirit In Motion

With age comes the loss of innocence, yet the childlike curiosity of what lies beyond in the afterlife never wanes. For me, reading this book made me more aware of the subtle allusions to our souls and what happens to them when we die. We all talk about death, but somehow I was blissfully unaware of the conflicting feelings of those around me. As I read, I began to learn to listen, to learn about how people truly felt. Regardless of religious affiliation, or lack thereof, we all want those around us to know how we feel. Aaron J. Schieding feels his work will "help you get to a better understanding of what lies within and what may lie ahead after your physical time is up." Just what does happen?

As I 'listened,' I began to think about what Schieding was trying to impart to the reader. At times it felt as if he was writing from a stream of consciousness point of view and perhaps he was. He began by throwing everything but the kitchen sink, including ghosts, into the mix in an attempt to showcase major belief systems. Schieding was simply beginning to weave a tapestry which later drew belief systems together, a preface to his research. He later noted that "Hindus think all religions of the world are true and think all living things have a soul." From the Mesoamerican civilization to the Chinese and the Egyptians, I began to learn about different opinions about the afterlife…and just how similar some of them are.

Schieding's research led him to believe that "there are seven major types of entities or spirits that exist in the entirety of the afterlife." In the three dimensions of existence, Heaven the middle dimension, and Hell, we find doppelgängers, ghosts, so-called "shadow people," animal spirits, demons, Angels, and God. It's a tall order to integrate and explain belief systems and spiritual beings, but Schieding did so in a manner that was quite impressive. Out of body experiences (OBE) and near death experiences (NDE) were also briefly explored and discussed relative to such bodies of work such as the Tibetan Book of the Dead.

The interviews followed, the choices fueled by Schieding's search for the afterlife he himself was convinced existed. He didn't limit himself to self-proclaimed experts in theology and academia, but rather went in search of those whose work intrigued him. Schieding went far afield to the Netherlands in search of Prof. Dr. M.J.H.M. Marcel Poorthuis's thoughts about the Christian viewpoint on the afterlife. Closer to home, and perhaps closer to his heart, he interviews Grand Master Jong Soo Lee and his wife, Master Linda Lee from New Hampshire. The interviews are free-flowing and I found myself fascinated more by the similarities of Eastern and Western views as opposed to their dissimilar ones.

Schieding easily tosses out the fact that there are the "believers, the ones who don't care or are unsure, and then there are the skeptics." I didn't feel he was trying to sway the reader in any direction, but rather attempts to impart to them the benefit of his research. The interviews were not in question and answer form, but nicely condensed, all connecting to the soul, linking it to the existence in the afterlife. This is a book that is highly readable, intensely thought-provoking, and one the reader will probably use as a reference and stepping stone into the world beyond. In the back of the book is an index and comprehensive bibliography to reference.


Quill says: This is a marvelous look at our souls and their links to unseen dimensions around us through the eyes of eminent scholars and religious leaders!

For more information on A Spirit In Motion, please visit the publisher's website at: phenomenabooks.org/books/


Posted by FeatheredQuillBookReviews at 8:52 PM

Labels: A Spirit In Motion by Aaron J. Schieding