Today we're talking with David Litwack, author of Along the Watchtower

FQ: I’ve read many books about soldiers coming home from war, but found Along the Watchtower quite different and original. The use of a fantasy story to help with the healing process was very innovative. Would you tell our readers a little about how this idea came about?

LITWACK: I’ve always been fascinated by how subjectively people perceive reality, each of us bringing our own experiences and biases into play. But when we’re ripped from our normal lives and placed in extreme circumstances, our reality becomes totally fragmented. Such is the case with hospitals and war.
Then a couple of years ago, I become engrossed in the online fantasy game, World of Warcraft, playing with my son. I’m on the East Coast and he’s on the West, so we’d meet every Wednesday evening in the virtual world of Azeroth, where our avatars would go on quests together. I was struck by how quickly time passed and how immersed I became in the surreal mood of the game, wandering around in strange places, solving riddles and overcoming trials.

The fantasy gaming experience has a dream-like quality to it. And I began to wonder: how would this experience affect the dreams of someone whose reality has been fragmented by war, PTSD and traumatic brain injury? These concepts—war, hospitals, and the fantasy world of online gaming—came together in Along the Watchtower.

FQ: Your protagonist, Freddie Williams, is a big gamer. Do you share this passion with him?

LITWACK: As the father of two sons, I played a number of games with them when they were younger, starting with the granddaddy of quest games, The Legend of Zelda. As part of my research for Along the Watchtower, I played a lot of World of Warcraft, like Freddie Williams, playing as a human warrior and a Dranei priest. I enjoyed playing these games, but they take a lot of time and detract from my busy writing schedule. I unfortunately topped out at level 63. Maybe someday . . .

FQ: Freddie suffered from PTSD, and the symptoms he suffers read very true. I’m thinking, for example, when Freddie saw the soda can and froze because in Iraq they were sometimes used to hide IEDs. How much research did you have to do to make the text so realistic?

LITWACK: I did a lot of research. One of the best books I read was Achilles in Vietnam. Written by a PTSD therapist, it contrasts actual discussions from his sessions with Vietnam veterans with dialog from Homer’s Odyssey. In this way, he’s able to show the tragic effects of war on soldiers across the millennia. By the way the full title is: Achilles in Vietnam: Combat Trauma and the Undoing of Character.

I also researched brain trauma. In an Instant is the story of Bob Woodruff, the CBS news correspondent who had just been named anchor when he was injured in an IED attack while embedded with troops in Iraq. It gave me insight, not only into the struggles to recover from brain injuries, but also how strange is the working of the human brain. At one point, the brilliant Woodruff could rattle off all past American presidents, but couldn’t recall the names of his own children.
And I read and listened to many stories from veterans. Until Tuesday is the story of a young Lieutenant who had difficulty functioning after the war and was helped to recover when he got a service dog named Tuesday (As an aside, these dogs are incredible—they can sense when their master is having a nightmare and wake them up). The Blue Cascade is another heart wrenching story of an Iraq veteran who returned home bitter and disillusioned. He found a way to face what he’d experienced in the war by making a documentary film based on video he took during the initial invasion of Iraq.

FQ: As I mentioned in my review, I found the gradual merging of the two stories a real plus. Was this something you set out to do from the start, as you began to develop the story?

LITWACK: Yes, absolutely. One of the things I learned from my research is how difficult it is to return from a war and reintegrate into what we call normal life. For Freddie Williams, it’s especially hard, given his physical and emotional wounds as well as his tragic family background. I wanted to show his trials though his subconscious, since they were too painful to face in the real world. I decided early on that the best way to do this was to have Freddie, an inveterate gamer, invent a game-like fantasy world and confront his demons there.

FQ: In respect to the fantasy aspect of the story, are you a big fantasy reader? If so, what authors are your favorites? Do you have a favorite fantasy sub-genre that you enjoy?

LITWACK: I grew up on sci-fi and fantasy, reading Tolkien, Edgar Rice Burroughs, Isaac Asimov, Robert Heinlein and Arthur C. Clarke. More recently, I’ve read Robert Jordan’s Wheel of Time series and discovered Neil Gaiman. But I also love literary fiction. I read all of Steinbeck and Hemingway by the time I was seventeen. In a way, Along the Watchtower is a blend of the fantasy of the former and the harsh realism of the latter. 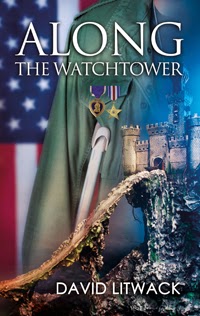 FQ: I appreciated the mystery of the four trials that Prince Frederick had to solve. Was it a lot of fun to come up with such trials?

LITWACK: I’m not sure fun is the word. When I write, I identify closely with my characters. The fantasy world was a terrifying place for Prince Frederick just as the real world was for Freddie. It did, however, give me a lot of freedom to get creative in how each of Freddie’s real world trials were reflected in the fantasy realm.

FQ: Prince Frederick constantly wanted to use magic to help him out of his dilemmas, but he was repeatedly told, by various characters, that magic was not the way, that he needed to rely on himself. Is this a message for the real Freddie and his attempts to move forward, to heal?

LITWACK: Much as the VA doctor tells Freddie that escaping reality is not the way back in his recovery, Prince Frederick is told that the solution to the trial is within himself and not through some outside magic.

FQ: I found Prince Frederick’s search for the trials similar to Freddie’s search for his brother Richie. Was this deliberate?

LITWACK: Prince Frederick’s attempt to confront the trials in his world certainly reflect the emotions Freddie was experiencing. I did try to give the fantasy world a dreamlike feel. And just like in our dreams, we can find similarities with real events, but they’re not an exact match.

FQ: Your next project, The Daughter of the Sea and the Sky will be out soon. Would you tell our readers a little bit about the novel?

LITWACK: My third novel, The Daughter of the Sea and the Sky, is very different. It’s about an alternate world divided between the Blessed Lands, a place of the spirit, and the Republic, whose people worship at the altar of reason. A mysterious nine-year-old girl from the Blessed Lands sails into the lives of a troubled couple in the Republic and seems to heal everyone she meets. She reveals nothing about herself, other than to say she’s the daughter of the sea and the sky. But she harbors a secret wound she herself cannot heal.

It was recently accepted for publication by Evolved Publishing and is set to be released in May, 2014.

To learn more about Along the Watchtower, please read the review at: Feathered Quill Book Reviews.

Posted by FeatheredQuillBookReviews at 9:45 PM