Today we're talking with Robert Orfali, author of Grieving a Soulmate: The Love Story Behind "Till Death Do Us Part"


FQ: Most of us are as you claim, “death virgins,” and don’t think about the actual process of death until it is almost literally knocking on our door. What are some of the preparations people should make before they find themselves in a crisis mode?


The short answer is that we need to familiarize ourselves with the workings of our byzantine “end-of-life” system. It’s a bizarre system that combines high-tech medical interventions with a medieval view of death. In the age of slow dying, this combination can be extremely toxic. About 80% of us will not leave life the way we would like to: at home and without needless suffering. The bottom line is that we have a very complex end-of-life system that requires a lot of skillful navigation. There are tons of gotchas that can result in big-time suffering. I touched on some of this in Grieving a Soulmate (see Chapter 3, “The Good Death”). This is the chapter I wish I had read before Jeri’s death. 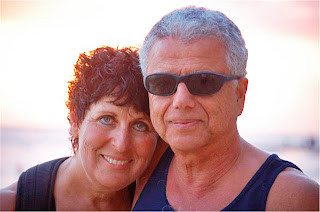 FQ: You talk about the love you felt for Jeri as she was dying by stating “It’s impossible to imagine two people being more intimate and close.” Can you tell us about these cherished moments?


Jeri and I were always madly in love. The love grew deeper during the ten years when we fought her cancer. It peaked during the last three or four days: it was very tender. It’s a great privilege to help someone die—especially your lover. It’s like helping give birth except in reverse. Of course, the survivor has to deal with the enormous pain of grief. In a soulmate relationship, it’s much easier to be the first to die.


FQ: “Grief bursts,” or “unexpected waves of grief,” can be incapacitating and extremely painful. You described it in part as your “own private holocaust all in my mind.” How and when did you begin to realize that you could help yourself?


The “holocaust” in my mind first began on the day after she died when I woke up the next morning in a world without Jeri. During this immediate period, the grief bursts can sometimes be very intense and even suicidal. Luckily, I went numb for a while dealing with the ocean funeral and all that stuff. The grief bursts resumed after the funeral. They just kept coming and coming with short lulls in between. I used these lulls to organize my thinking—to understand what was happening to me. It took me a month to come up with a plan on how to beat back these grief bursts. I used “divide and conquer” to break down the grief. I divided my grief and assigned it to five different buckets. Then I was able to separately deal with the grief in each bucket. The trick is not to take on the grief in its totality—it’s too overwhelming.


Each one of us will have our own buckets, the triggers of grief bursts. You can use mine as templates. In my case there were five buckets: 1) the flashbacks of the last days—the trauma of watching Jeri die, 2) survivor's guilt—I was alive but Jeri wasn’t, 3) she’s gone forever—the yearning cycle, 4) self-pity—I would have to recreate my world without her, and 5) the deep existential questions: where did she go? what was her life all about?


Each of my grief bursts fell into one of these categories. I learned how to recognize them. At first I just noted them. Later I devised methods for eradicating them. Once you pop a grief burst it never comes back. I measured my progress by tracking the number of daily grief bursts.


FQ: At one point you talked about how a village supported the bereaved and its absence in today’s society, yet you have many emails to others in your book. Perhaps you did have your own “village.” How did emailing help you in your grief process?


A modern soulmate relationship replaces an entire village. Consequently, it encapsulates many of the bonds that were once distributed across a village. If you think about it, we put all our eggs in one basket. When that basket breaks we’re left alone to grieve. It’s the nature of soulmate grief: it can’t be shared. Friends were helpful but it was my grief to carry. I had to learn how to deal with it. Jeri’s girlfriends were with her when she was dying, and they experienced flashbacks of those last days. We could share that grief. We were all in shock trying to make sense of what had happened. My first e-mails were addressed to the girlfriends. They dealt with my grief bucket from “the last days.” We were trying to help each other. Later, my e-mails were sent to a larger group of friends. I tried to keep them posted on what I was doing about my entire grief. I found writing therapeutic, and it helped me organize my thinking. I wasn’t expecting responses: the sad truth is that my friends couldn’t bring Jeri back to life, however much they would have loved to. Finally, I used some of these e-mails to communicate with my grief counselor. We used them to go over my “grief work” strategy. By the way, this grief work is what I found missing from grief theory. The theorists describe grief—including its stages and phases—but don’t tell you what to do about it. They do not provide a recipe for grief work.


FQ: Everyone has lapses of one sort or another. Have you had any grief bursts since the completion of this book and if so, how did you handle them?


The red-hot pain stopped after four months of hard work. I’ve stopped experiencing these horrible grief bursts that took full control over my being. Now, I can control them and deflect them. Remember, it’s all in the mind. My “cure” worked for me. I miss Jeri's physical presence, but I can function. Our love relationship continues, in absentia. It’s like a long-distance love relationship. I talk to her all the time. This continuing love bond is a very important part of healing—again, you won’t get much of that from grief theory.


To learn more about Grieving a Soulmate: The Love Story Behind "Till Death Do Us Part", please read the review at Feathered Quill Book Reviews
Posted by FeatheredQuillBookReviews at 9:29 PM

Labels: Grieving a Soulmate: The Love Story Behind "Till Death Do Us Part", robert orfali