Today we're talking with Lin Pardey, author of Bull Canyon, A Boatbuilder, a Writer, and Other Wildlife


FQ: Many people would find that sailing on the Seraffyn would be a challenging, somewhat daunting adventure of a lifetime, yet somehow when reading Bull Canyon, I sensed that building a boat in the middle of nowhere seemed more daunting to you. Not all your time in Bull Canyon was peaches and cream. Aside from those pesky packrats, what was the hardest part of living in Bull Canyon?


Managing my time was definitely made much more difficult by the remoteness and lack of communications. In order to have the materials Larry needed for boatbuilding, the supplies we needed for general living, I often had to be away searching the timber yards and supply houses of Los Angeles and Orange County for two days at a time. Then there was the day each week I spent in the local town making phone calls, picking up the post, doing laundry. Finding time to get my writing work done, help Larry and still set some aside to relax and enjoy friends, family and each other was the most challenging part of life in the canyon. 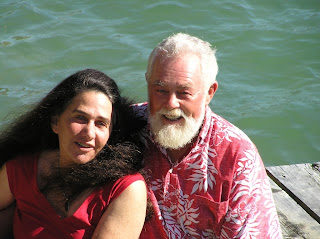 FQ: Everyone has marvelous qualities, but we all have those that sometimes make the next guy roll his eyes. You claimed that Larry's determination was "his biggest strength," but was "also at times his fatal flaw." What is his most endearing quality? Was your time in Bull Canyon one of those periods of time in life that brought you together more closely as a couple and how? Of course Larry is welcome to chime in about one of Lin's most endearing qualities and fatal (if he dares).


One of Larry’s best qualities definitely is his willingness to acknowledge and encourage me to develop and use what he calls, “the skills you have that complement mine.” As close as we had been before we moved to the canyon (remember we often spent weeks at sea in the confines of a 24 foot sailboat) we definitely solidified our relationship in the wide open spaces of the canyon because he cheered me on as I explored my writing skills, tried my hand at woodworking and went on to challenge the bureaucrats we encountered.


Larry laughed when I asked what he considers my strongest point and at the same time my fatal flaw. “That’s easy, you are generous as can be with your time and energy. Sometimes you give too much to everyone else and end up with none left over for you or me.” 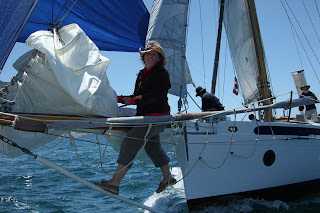 FQ: Everyone in the sailing world thinks of you and Larry as "sailing legends." Your time in Bull Canyon seemed like a pleasant interlude, a time where memories were created. What do you miss most about living there? The least?


Just last week, (early spring) when we were in California, we took time to drive out to Bull Canyon. Surprisingly, very little has changed since we left. In fact fewer people live there now. The old stone cottage is still lovely but has gone into foreclosure so is deserted and neglected looking. As we walked among the trees that still shade the yard and tower over the remains of the old boatshop I found myself yearning to finish restoring the cottage and its grounds. I really did enjoy making the place look lived in and loved. But then I thought of dust and heat of summer, the roughness of the long dirt road and remembered what I liked least about life in the canyon. 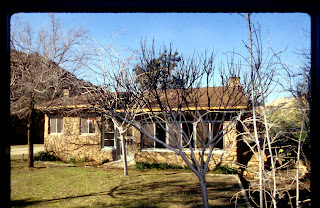 FQ: You and Larry had dreams that turned to schemes. Your life in Bull Canyon gives your audience a wonderful glimpse inside your lives and the couple who were behind your series of highly popular sailing books. Any more dreaming and scheming in your future? Another book perhaps?


I couldn’t imagine life without schemes and dreams. But we learned an important lesson by listening to potential voyagers telling their friends they planned to sail around the world. Those folks got their life together, set off for a voyage and maybe went down to Mexico for six or eight months. Then something happened, a parent became ill, finances changed, what ever. They had to return home and now all their friends asked, “What happened? Thought you were going around the world,” in effect implying they failed. They hadn’t really failed; they’d had a fine time. But, they had set themselves up for failure. So now we warn potential voyagers, and potential writers, never tell anyone what you plan to do. It is far safer to keep that information to yourselves just in case something changes. 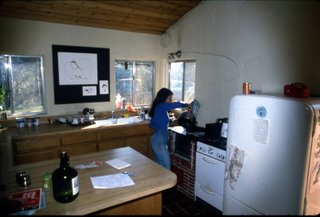 FQ: Together you've sailed more than 200,000 miles, some of it on the Taleisin, the boat that was born in Bull Canyon. For the audience new to your work and the world of sailing, perhaps you could briefly talk about a memorable time when you and Larry were on the seas with her.


Taleisin scurried quickly before warm caressing tradewinds a few months after we’d rounded Cape Horn. It was my watch. Larry slept soundly in the pilot berth as I climbed out on deck. The moon had just set and the full darkness of night made the green bioluminescent glow of the boat’s wake seem even brighter. I’d checked on the chart and noted that we should soon sight the navigation light that marks the southern end of the big island of Hawaii. So after checking around the deck to make sure everything was as it should be, running lights shinning brightly, lines neatly coiled, sails steady, I stood on the cabin top to scan the horizon ahead of us. Then I spotted it, a wink of light far ahead. I watched for a few moments and realized the light didn’t seem to be bright white; it didn’t seem to flash in a regular pattern. I climbed quietly below, careful not to wake Larry and grabbed the binoculars. Back on deck, I climbed onto the cabin top and leaned against the mast to steady myself. As I slowly focused the binoculars the light turned into a golden river that left me feeling breathless. Just like the early Polynesian sailors who had explored the vast expanses of the Pacific in open canoes, my first sight of these fabled islands, the beacon that welcomed me to a new and fertile land, was a glow of lava seeping down from the heights of a huge volcano to hiss into the churning waters of the sea. 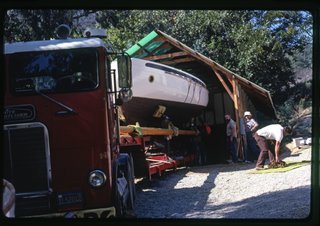 FQ: How long did it take you to write Bull Canyon?


I wrote the bare bones of the first five chapters almost 20 years ago. They languished in a file folder for twelve years. A chance encounter with Maria Eugenia Bestani, a professor of English Literature from the University of Tucuman, Argentina made me reconsider those chapters. Even with her encouragement and the enthusiasm of Kathryn Mulders, a Canadian literary agent, 8 years passed before I was fully satisfied with the manuscript. That’s 20 years from inception to completion—-not a record but definitely a long gestation.


FQ: It is fascinating to watch the progress of Taleisin through the pictures in Bull Canyon. What was it like to see Taleisin taking shape before your eyes? Was it bittersweet in any way in that it represented a time when you would leave Bull Canyon? 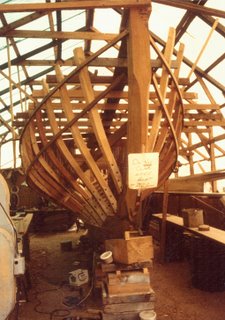 The only thing I like better than watching things being built is being part of that process. Watching Taleisin take shape was utterly fulfilling. Each new piece of timber that was fitted then varnished felt like a reason to celebrate. At first, I didn’t want the construction to go too quickly as I was enjoying the adventure of being on shore, savoring canyon life. I came to love our daily routines, my writing time (and wonderful office,) contact with my family. But as the frames slowly began to look more like a boat that would carry us onto new adventures, I began feeling ever more restless. Looking back, I feel blessed that the project and our time in Bull Canyon lasted just long enough. What is the worst piece of writing advice you’ve ever received? Soon after I started writing sailing stories almost 35 years ago, a magazine editor took me to meet a quite famous London literary agent. “Haven’t been attacked by any sharks? Haven’t been eaten by a whale? Forget it, no one will read a book that doesn’t have a really dramatic story.” It was about three years later that our first sailing book was published. It told about life on a small boat and the interesting encounters we had with people along our sailing route. There are no big dramas, only a few days of stormy weather and lots of fine sailing tales. Cruising in Seraffyn has now sold over 50,000 copies and is still in print and available as an eBook, and people still write to tell me they how much they enjoyed the story.


To learn more about Bull Canyon, A Boatbuilder, a Writer, and Other Wildlife please read the review at: Feathered Quill Book Reviews.
Posted by FeatheredQuillBookReviews at 8:06 PM

Labels: A Boatbuilder, a Writer, and Other Wildlife, Bull Canyon, Lin Pardey