#BookReview of Transgression: Hitler, Mirka, Mireille and Me by Ben Stoltzfus 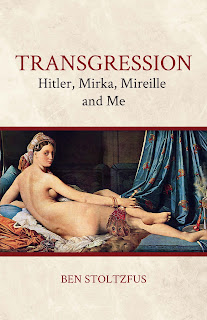 Transgression: Hitler, Mirka, Mireille and Me


A young man faces struggles for possession of his soul as he learns inwardly about love and outwardly observes a worldwide cataclysm unfolding, in this dynamic tale by author Ben Stoltzfus.

The book’s narrator is American, trapped with his family in Europe as the first rumblings of Hitler’s mad determination to take over the continent begin to be heard. In Sofia, the situation heats up with invasion, accompanied by bombing. The family will begin a slow journey eastward, through Istanbul, Beirut, Aleppo, and the Holy Land, before achieving a return to the sanctuary of the US. In the initial chapter, the teenager, some of whose friends are already experimenting with sex, will make his own discovery of feminine charms with a highly seductive gypsy girl, the Mirka of the book’s title. From their earliest intimacies, he, a highly read individual, will find himself in mental dialogue, consultation and verbal castigation with both Satan and an Archangel, each apparently vying for his soul’s attention and domination. When he and his father begin their journey to freedom, he reckons he will never see Mirka again, and as news slowly filters in regarding Hitler’s hatred of gypsies and Jews, he will probably be right in that assumption. But farther along in his journey – each new city and nation described in close-up human detail – he will encounter yet another easily adored muse in the form of Mireille, who will teach him French and enhance his familiarity with the female mind and body. As his trek continues, his father, a preacher, will share news and knowledge of Mahatma Gandhi, whose philosophy of satyagraha and his embrace of non-violence will deeply influence the young man, who, once his studies are completed, must consider whether to sign up for the draft.

Stoltzfus is a Professor Emeritus of Comparative Literature and Creative Writing, clearly well qualified to create and share the innate skills and sensitivities of his young protagonist. Each chapter of this highly readable work is named by place, as the teen and his family travel halfway around the world to escape the rigors and horrors of Hitler’s schemes, made plain by many quotations from that tyrant. The ugliness of worldwide conflict is balanced by the beauty of the two young women and the alluring possibility of true, universal peace. News of the conflict by radio and other sources peppers the narrative on almost every page. And the boy’s reading of classic and contemporary writers as well as his nascent plans to write a story expressing his deepest beliefs also provides rich fodder for readers.

Quill says: In Transgression, Ben Stoltzfus gathers skeins from many divergent sources to weave a fascinating tapestry of youth’s hopes, ambitions and increasing understanding of the ways of the world, set against a background of war and destruction.

For more information on Transgression: Hitler, Mirka, Mireille and Me, please visit the author's website at: www.benstoltzfus.com

Posted by FeatheredQuillBookReviews at 9:02 AM