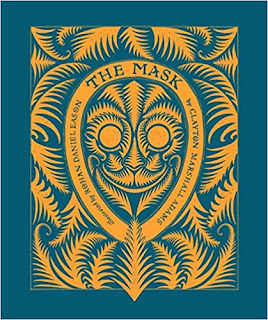 The Mask
By: Clayton Marshall Adams
Illustrated by: Rohan Daniel Eason
Publisher: CJ Sparrow Publication
Publication Date: October 2021
ISBN: 978-057856993-2
Reviewed by: Holly Connors
Review Date: July 25, 2021
A young man, alone and unloved in a world that finds him ugly, is the premise of the mesmerizing story The Mask.
Born deformed, with a face that terrified people and legs that bent in different directions, Mil was very much alone. Too slow to run away from bullies, Mil was ridiculed and called horrible things like “freak” and “the village idiot.” When he was old enough to care for himself, his parents abandoned him in the forest. Mil, however, found a semblance of peace in the forest, a place where no one would bother him and he was able to pursue his passion – sculpting things from the wood he collected.
The only person who ever showed Mil any kindness was Maria, a young girl from the village. But even she eventually stayed away, once another boy teased her for befriending the deformed boy. Mil was alone and unloved, but that was about to change.
One day while Mil was searching for interesting wood to use in his sculpting projects, he stumbled upon something buried in the dirt. Thinking it was a bowl, Mil picked it up, only to discover that it was a mask. Interesting, he thought, but not something he wanted. He was about to throw it away when The Mask spoke to him, telling Mill to “...put me on...” and “I can make you beautiful.” The Mask told him he’d be so beautiful that no one would be able to ignore him. There was just one catch – at some point, The Mask would ask Mil for a service and if Mil refused, then the boy would revert to his old, deformed self. The Mask wanted an answer immediately and he wasn’t willing to wait. What should Mil do? He had to make a monumental decision, a decision that could potentially change his life.
Written by the author when he was just 16 years old, The Mask is a powerful allegorical tale about bullying and self-image. The villagers are cruel and one boy in particular, Rufus, takes bullying to a new level when he spits in Mil’s face while mocking him. The story is short and can be read quickly and is most suited for pre-teen and teen readers. Younger readers may benefit from reading it along with an adult they trust to help open dialogue about bullying.
The choices that Mil makes are decisions that many in his position would choose and will draw readers to him. The ending involved an ultimate choice and what happened surprised this reviewer and will likely startle readers too. Without a spoiler, I’ll say the ending had me initially reacting with a “wait, what?” but then I thought about it and I realized it was perfect. Undoubtedly, the ending, and indeed the whole story, will make readers think about their own choices and provide a jumping off point for conversations asking, “what would you do?”
Quill says: The Mask is a story that will stay with you long after you’ve finished reading. Simple yet fascinating, it deserves to be shared with both pre-teens and teens.
For more information on The Mask, please visit the publisher's website at: www.cjsparrowpublication.com
Posted by FeatheredQuillBookReviews at 12:25 PM