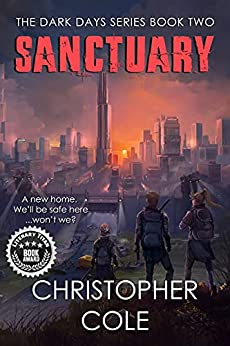 Today, Feathered Quill reviewer Amy Lignor is talking with Christopher Cole, author of Sanctuary (The Dark Days Series Book Two).
FQ: Could you tell readers about the “day in the life of Christopher Cole” when Sonny and his friends were realized?
COLE: Sonny is a character that I’ve always wanted in a story. Someone who is strong, capable, and willing to fight for what he believes in and for what he cares about. Ashley and Carrie are both his friends and his family. They are as much of an influence in his life as he is to them. The moments where you see them care for each other I wanted the readers to feel that as they’re reading. These three came to me out of my love and desire for similar characters that have such a strong and likable bond in each other.
FQ: What made you decide to make this story a series? Did you first see it as one, or was it one of those things where there was just too much to put into one book after you were half-way through writing Outbreak?
COLE: First I wrote an outline and as I continued to add the major events, I knew it was too much for one book. Also, a series can make the readers want more of the story whereas one book even if it’s great, it’s finished when you get to the end. A series can end each book on a cliffhanger making the readers wanting more and that’s what I wanted for my series.
FQ: Where do you get all of these wonderful characters? Are they based on people you know, or are they all invented?
COLE: Some of the characters are based on other characters or at least certain elements are based on other characters. I wanted the characters to be ones that the readers would care and root for. Growing up, it was hard for me to get into reading, because I kept finding stories that didn’t have a main character to root for or one with side characters that were better than the main character.
FQ: Speaking of your cast of characters, I absolutely loved Grim. He was fascinating on several levels - was he a fun character to develop? 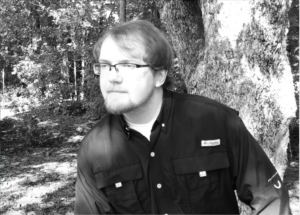 COLE: He’s both a fun character and a complicated one. Out of all the characters I’ve created, Grim’s character was the one I wanted to do just right. I wanted to make it clear on who and what kind of person he is without filling everything about him with answers. Leaving some parts of him a mystery pulls people in and that’s what I wanted for him. Grim has what I would call “The Cowboy Code,” like in the classic Western movies. After all the bad things they’ve been through, the cowboys have their own code of honor where it’s enough where they’re not gonna give and keep fighting even if it’s not entirely clear what that is.
FQ: In addition, there are a menu of characters. How do you keep them all straight?
COLE: I have a list of the characters I keep track with and I also try to add something to characters that make them different from the other characters. Like how Jess knows about plants, Patch is the prankster/funny one, River is the tough girl with a kind heart, Molly is a free spirit, etc. As each book, I’ll continue to add new things that make them different to help them grow. Characters change and evolve as they grow.
FQ: When does your mind begin to form the next story? In other words, do you already have the plot for Book Three mapped out while in the process of writing Book Two?
COLE: Book Three is mapped out and in development as are the other future books, but as time goes on, I continue to add and re-edit the outline to make it better or different. Sometimes ideas come to me, while other times I brainstorm what would work and what wouldn’t.
FQ: Do you have particular authors you enjoy? Some out there where you are practically antsy for the next one to be released?
COLE: I greatly enjoyed Gary Paulsen and his Brian series and Tucket books. His books are written through the characters POV like mine so you feel like you’re in the action. However, Neal Shusterman’s Skinjacker Trilogy is what inspired me to write. His books just pulled me in and lit the writer’s fire in me.
FQ: Is there a different genre you would like to try during your career? If so, what would that be and why do you wish to tackle it?
COLE: I’ve taken interest in drama fiction. I’ve co-written a book that’s also gonna be a series with a fellow author of Kingston Publishing. The book is called Rising Up. It’s about two kids that are best friends who realize that they need each other in their own way. I wish to tackle this, because I did enjoy certain drama books growing up and I’ve developed a story in my head that I wish to tell. 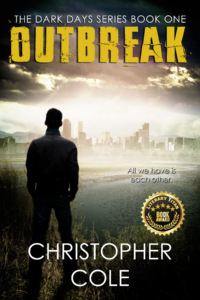 FQ: You have to give us something (LOL). A little sneak peek at Book Three, and whether or not The Dark Days will be a trilogy or will it be going further?
COLE: In my outline, I have at least six books in my mind. It might be five, I’m still working on the outline. I know how I want the whole series to end, but it’s everything in between that I’m struggling with which is what is causing me to edit the outline.
Sneak Peak of Book Three: Survival
“It’s only been a few short years since Nathan and his friends found the sanctuary Fort Gold Rush. After being recruited for the Black Shadows, along with the enduring brutal zombie and bandit attacks, those two years felt like two hundred. However, their problems are only just beginning.
A rebellious anti-government terrorist organization called The California Freedom Fighters, has emerged to commit a coup on the Pacific Army and take over the fort. On top of that, rival communities that are at war with each other have their eyes set on Fort Gold Rush as well. The badlands of America are becoming more and more dangerous.
Nathan and his friends must use all their strength, power, and wits to defend the only home they have left, but will it be enough? Can they save their safe haven from total destruction or will they be forced to live out in the badlands again?”
Posted by FeatheredQuillBookReviews at 11:22 AM