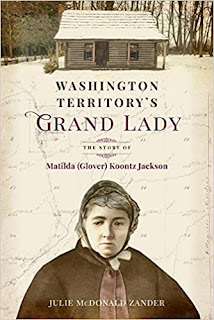 A pioneering woman embraces adventure, suffers loss, and lives on with pride and well-deserved recognition in this stirring, fact-rich history by Julie McDonald Zander.

Matilda Glover was born in Maryland, when the vast lands of America had yet to be occupied much beyond the east coast. Her parents, who were opposed to slavery, moved to Missouri, at that time not allied with the institution of slave holding. There she grew up and married Nicolas Coonse (spelling later changed to Koontz). Their first year of marriage was marred by the economic Panic of 1837, an enormous flooding of the Missouri River, and a cholera epidemic in the state and beyond.

When the Oregon Territory was officially designated, Nicolas, like thousands of other intrepid settlers, resolved to move there with Matilda and their four boys. Traveling the 2,000-plus miles by wagon, carrying hundreds of pounds of supplies to keep the family fed, clothed and protected from hostile influences, Matilda cooked and cleaned and watched over her sons. Tragedy struck when Nicolas drowned in the Snake River, and the then-pregnant Matilda suddenly gave birth to a child who lived only a few days. Yet turning back was not an option. She and her sons pushed on to the Willamette region of northwest Oregon. There she met and soon married a vibrant, entrepreneurial Englishman, John R. Jackson. With him she would become a much-celebrated hostess, entertaining in his various enterprises such notables as Generals Grant, Sheridan and McClellan. At her death, she was remembered as so staunchly attached to home and hearth that she had never ridden a train, and had seen one only once.

Author Zander has used diligent research to focus sharply on this courageous female, distinguished by her intelligence and her grit in the face of loss and hardship. Matilda’s granddaughters later sought to immortalize her, chronicling her daily life, stressing that those who came her way were always treated to warm hospitality and excellent, if homely, cuisine. Through the many letters and papers written to, from and about Matilda, we learn that she was a woman of Christian faith who never wavered and often inspired those around her. With Jackson she helped found and operate the region’s first courthouse (formerly their humble cabin home), engaging in patriotic activism—including helping to sew the first American flag—for the newborn State of Oregon. These historic papers, with their archaic spellings and highly formal prose, give a meaningful glimpse into the settler mentality.

Quill says: Well organized by reporter/editor/publisher Zander, Washington Territory’s Grand Lady pays due homage to a hardworking, determined pioneer woman in all aspects of her long and distinguished life.

Posted by FeatheredQuillBookReviews at 11:15 AM