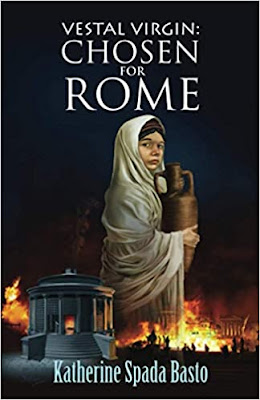 A little girl is sold to a religious cult, grows beyond the trauma and becomes a stalwart force for true righteousness in this history-based novel by Katherine Spada Basto.

Cornelia Cosa, growing up in Rome during the reign of Emperor Nero, is excited; it’s her tenth birthday. Little does she realize she has been entered into a lottery, the winner of which will become one of the virgin followers of Vesta, the goddess of the hearth. Vestal Virgins are revered in Rome and overseen by Nero himself. To her shock, Cornelia wins, seeing her father receive bags of gold for the “prize.”

Cornelia is forced into a new life at once, leaving behind all she has known. Despite the many restrictions placed upon her by the order, she gradually learns the powers and ceremonial enjoyments of being a member of the sacred cult. Her acceptance of her fate is bolstered in part by the kindliness of Lucius, a young man serving as an augur in Nero’s court. One of Cornelia’s fellow virgins tells her in secret of a Nazarene named Jesus, whose teachings of a single deity supersede the mythological pantheon of gods and goddesses touted by the Roman authorities. Cornelia will have a chance to hear the preaching of Paul, opening her mind to fresh possibilities. By contrast, she is plagued by the memory of Nero’s personal, brutal assault on one of her Vestal sisters. Then Nero goes mad, Rome burns, and the young teen will have a chance to exercise her Vestal powers.

Author Basto has garnered awards and recognition for this novel, written with gusto and grounded in recorded fact. From the beginning, the reader will feel the stress and sadness of the child Cornelia describing her abandonment to a strict religious cult. The story quickly expands, with many plot twists that are all believably set in ancient Rome at a critical time in its history. Christianity is making itself felt and will affect Basto’s brave young heroine, sharpening her perceptions of the true meaning of spirituality. The author has drawn from historical annals both the names of several of the main characters, including Cornelia, and some of the notable incidents enlivened in the account. She deftly weaves these names and snippets together into the larger tapestry of the known world in a time of crisis, with Cornelia as sharp-eyed observer and bold participant.

For more information on Vestal Virgin: Chosen for Rome, please visit the author's website at: www.katherinespadobasto.com/

Posted by FeatheredQuillBookReviews at 12:26 PM