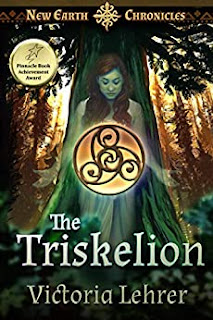 In her second of the New Earth Chronicles, author Victoria Lehrer focuses on a thwarted romance, an impending execution, and the possibility of a widespread injection engineered by tyrants to quell a rumbling rebellion.

The central character in this enthralling sci-fi fantasy is Dora D’Arc, a young woman of aristocratic heritage living now in Transtopia. She has fallen in love with Caellum, who is leading an insurrection known as the Sovereignty Movement. This movement has determined that all inhabitants will have equal rights at governance. Meanwhile Charles Scholtz, the Imperial Governor, holds sway since the earth was devastated by a Solar Flash in an era not far in the future from our own. Charles is determined to implant all rebels, including Caellum who is imprisoned and facing death by hanging, with a device that will make them docile workers for his self-centered regime.

Part of Charles' maniacal plot involves Dora, who has, he believes, just the sort of sweet, loveable face needed to tout his evil scheme to the unsuspecting masses. But as Dora grows closer to Caellum even during his captivity, she allies more and more with his ideals. When Charles insists that she marry his son Rolf to produce an heir, the promise of Caellum’s release is too powerful to resist, so Dora finds herself caught between the two sides. Two rebel allies called “runners,” Adair and Eena, hiding out in the tangled forests of Cedarhenge, will assist Dora and help her realize her own innate powers.

Lehrer is a teacher who turned to writing inspired by the understanding that all people have traditionally learned much about the world through well-told stories. In the broad tapestry of the New Earth series, she draws together threads of science, human morality at its best and worst, and a number of strong daring women who willingly take on the task of saving their world from despotic rule. There are glimpses of the past – automobiles and airplanes are still in use in her dystopian future world – as well as an occult overlay that incorporates druidic lore, Native American legends and the symbolism of the Celtic triskelion, a decorative device with multi-layered meaning. There are real places like Quartz Mountain to remind us that the setting is earthbound. Eena is one of the memorable figures drawn from the earlier volume, The Augur’s View. The specter of mass inoculations will strike a chord in the current era, while the prospect of a return to older, simpler ways will give encouragement to many.

Quill says: This new offering from Victoria Lehrer is constructed carefully to prepare her fans for a powerful sequel, composed in the manner of Tolkien and Le Guin, offering glimmers of hope and higher possibility beyond the darkness of oppression.

For more information on The Triskelion: A Post-Apocalyptic Adventure, please visit the website: www.newearthchronicles.net

Posted by FeatheredQuillBookReviews at 11:35 AM