#BookReview - The Travels of Ibn Thomas 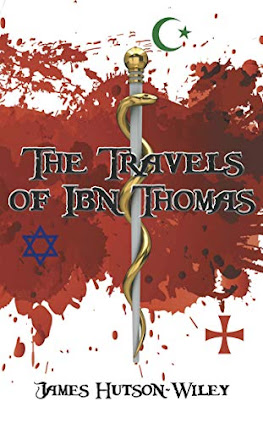 The Travels of Ibn Thomas

The Travels of Ibn Thomas by James Hutson-Wiley is an insightful read centered around the twelfth century commercial and scientific revolution with faith at its center.

In the second book in this series, Thoma (son of Thomas the Sugar Merchant) is introduced. He is born in Egypt and raised in England. Thoma is privileged to study in Italy at the Salernitan Medical School as he trains to become a physician. While in Sicily, Thoma saves the life of a noble prince and is graced with the prestigious job of court physician. There is a lot of credence to all good things must come to an end and such is the case for Thoma. Tragedy strikes and Thoma manages to escape Italy. However, his journey is just beginning.

Even though Thoma manages to escape, he is captured by pirates. Of the most unlikely of friends he selects, he opts for an assassin and is immersed into political and religious unrest in the Holy Land beyond the first crusade. Often Thoma teeters with his choice of alliances; be it religion or politics. Thoma is deeply entrenched in international conflict and his story is that of one man’s life and the epic experience during the historical events of the twelfth century revolution between commerce and science.

As was the case with James Hutson-Wiley’s first book (The Sugar Merchant), he does not scrimp when it comes to information. There is a map in the first few pages that displays the travels of main character ‘Thoma.’ This is a useful guide to source often throughout the story to orient the reader toward the whereabouts of Thoma’s journey. In the opening chapter, Hutson-Wiley takes the reader back to ‘Eynsham AD 1104, AH 497, AM 4864’. This is a helpful refresh if the reader has read the first book in the series, but also beneficial if one opts to read this book as a standalone. Once again, there is a glossary at book’s end to facilitate dialogue and definition of certain terminology. The body of work reads like a story. However, it also carries a sublime and interesting history line throughout. Perhaps I am biased to a certain extent because I’m a ‘history junkie,’ but I would highly recommend this to a vast audience. The sheer entertainment and depth that has been woven into the tale along with the credibility and lifelike characters developed along the way has a wonderful cadence throughout the read. Bravo Mr. Hutson-Wiley. I look forward to your next book.

Quill says: The Travels of Ibn Thomas is a great reader’s choice that showcases events from Twelfth Century history.

Posted by FeatheredQuillBookReviews at 6:22 PM