#BookReview - Stompin' at the Savoy 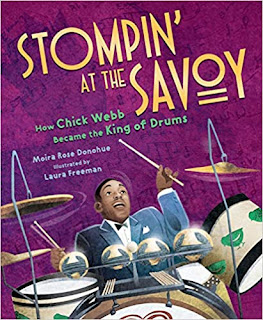 Stompin' at the Savoy: How Chick Webb Became the King of Drums

Stompin' at the Savoy is a heartfelt story about the life of one incredible musician and how perseverance led to some of the most amazing music ever played.

William Henry "Chick" Webb was born in the early 1900s (the exact date is open to debate). His early life was difficult as he suffered from spinal tuberculosis and was often teased by the other children. When an accident sent him to the hospital, he had an operation that left him weak. His doctor suggested a drum set to help strengthen young William's arms but his mother was too poor to afford drums. No problem - William made his own set of drumsticks and clanked them on anything he could find.

William stopped growing when he was just four feet, one inch, but that never stopped this determined young man. Add in the fact that his tuberculosis caused a curved spine and the teasing he endured was heartless. The other children began to call him "Chicken" because he had a hunched back but again, the talented boy turned a negative into a positive - his nickname soon became Chick and the name stuck (he even added a chicken design to his drum set). What also stuck was Chick's passion for drums. He'd play with his makeshift drums every chance he'd get and by the time Chick was a teenager, he was getting gigs to play the drums in various bands. That's when the young musician met Duck Ellington, who saw the talent Chick possessed and told him to start his own band.

By the late 1920's, Swing was the "in" sound and Chick was a natural. He and his band (including singer Ella Fitzgerald!) played the famous Savoy Ballroom in Harlem many times. Chick was now known as the "Savoy King," and it was at this time that he challenged Benny Goodman, the "King of Swing," to a battle of the bands. Who would win the battle? Benny Goodman's band, considered one of, if not THE, best band in the country, or the "Savoy King," who never let his size or health issues stop him?

Stompin' at the Savoy is such a fun, upbeat story that you can't help but have a smile on your face by the time you get to the end. I knew of Chick Webb but didn't realize he had such an amazing story. The positive messages throughout - "Being small didn't change the size of Chick's dreams" - were uplifting. Add in the musical background to the story, the challenge of the bands, the other famous musicians who appear in the story, and you have a biography written for children, that children will love and be inspired by. This book should be in all school libraries and will likely become a favorite of many aspiring young musicians.

Quill says: Stompin' at the Savoy brings the era of Swing to life through the amazing life of Chick Webb. A wonderful book that both children and parents will enjoy.

Posted by FeatheredQuillBookReviews at 1:37 PM