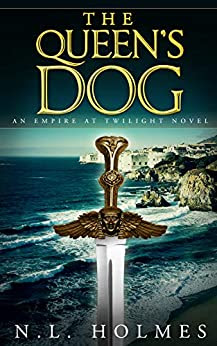 The Queen’s Dog is a political thriller novel in the Empire at Twilight series by N. L. Holmes. Set mainly in Ugarit, a vassal state to the kingdom of Hatti, it follows Nahish-shulmanu, nicknamed Naheshi, a eunuch slave to the queen of Ugarit. He is infatuated with her but is eventually coerced into spying on her disloyal activities by the king’s mother. As an Assyrian in Ugarit during a time of potential war with his country of origin, he stands at a unique risk. This is something people do not shy away from taking advantage of, much to Naheshi's detriment.

I haven’t read any other book set in an ancient Syrian kingdom before, and it was exciting to learn a little bit about such a complex and fascinating culture. It’s so wildly different from the Western cultures many historical novels are centered around, and it’s a refreshing setting to explore. Audiences have to navigate the politics of not only the main characters’ own courts, but the social consequences of who they associate with. Each decision they make has personal and professional ramifications that have the potential to come back and haunt them.

N.L. Holmes builds a set of complicated relationships between her main characters, all of which are heavily influenced by whatever positions they hold at court, and who has power over whom. Every seemingly sincere action is soured by an ulterior motive, creating a fast-paced, quickly thickening plot of political drama.

Holmes’s strength for building complicated relationships between characters also unexpectedly develops one of the novel’s greatest weaknesses. As the queen’s chamberlain and supervisor of the household staff, her main narrator, Naheshi, is expected to interact with many other slaves and servants, one of which is an older eunuch named Agripsharri, who he is somewhat afraid of. At one point in the novel, Agripsharri briefly ends up in a position of power over Naheshi, as a blackmailer. He then uses that power over Naheshi to rape him.

While initially the incident is treated as horrible and wrong, it’s later excused by implying Naheshi deserved the assault for treating Agripsharri unkindly. While this is clearly dealing with a different time and culture, the victim blaming plays no other role in the story beyond being a “character development” moment. Naheshi is a generally unlikable character, but him realizing he “deserved” the rape is treated as personal growth. Even taking the culture differences into account, it’s a scene that feels out of place in a novel published in 2020, and has the potential to alienate some of the author’s audience.

Most, if not all, of the main characters are very unlikable. The queen is self-centered and has an excuse for every mistake she makes. Naheshi is an easily manipulated coward. Every major political power is out solely for themselves. While this makes it impossible to connect with any of them emotionally, this detachment does allow the reader to really think about the political decisions being made. The contemptible nature of the characters seems to be a deliberate decision of the author’s, to keep the main focus on the political drama unfolding across Ugarit.

The Queen’s Dog is a plot-centric political drama that explores the complex relationships between the vassal states of the kingdom of Hatti. With its focus on plot, it’s not the ideal read for a reader who prefers character-driven stories. However, the fast-paced plot will keep its target audience engaged and eager to keep devouring the unfolding court disasters. The Queen’s Dog is sure to find a home among historical fiction fans with an interest in more plot-centered novels.

For more information on The Queen's Dog (Empire at Twilight Book 3), please visit the author's website at: www.nlholmes.com/

Posted by FeatheredQuillBookReviews at 4:30 PM