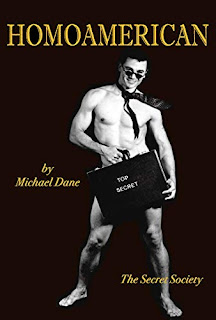 Michael Dane, born Dean Michael Kocee on September 28, 1954, wanted to live an invisible life for as long as he could remember. He thought being invisible could save one person so much trouble - you do not get bullied when you’re invisible; you do not get hurt when you’re invisible. Smart and young Michael knew how to deal with his fears and escape from terrible situations when he wanted or needed to. But explaining himself, that’s what he found difficult. How could he explain himself to others when he didn't even know who he was?

Growing up, Michael knew he was different. And if there’s one thing that was clear to Michael, it’s the fact that being different was usually labeled as wrong, even when it was not. He tried his best to conform but he couldn't hide his talent and personality for long. He realized he had to get out there and be stronger - he had to be seen. After years of wanting to be invisible, Michael learned that being visible had its own perks too. For one, he could further understand and defend himself if he was in the spotlight. After all, the more you show yourself to others, the more you discover about yourself.

Michael Dane’s HomoAmerican: The Secret Society is a painstakingly detailed autobiography equipped with dramatic flair and sense of humor. Dane’s voice carries a casual tone that welcomes the reader into various stages of his life. From his happy yet strange childhood to his parents’ divorce. From looking at the world from within to trying out ballet and living life on the outside looking in. From San Francisco to New York. From hiding to rebelling - all to find who he really is, amidst the chaos surrounding him. Dane does not waste even the tiniest bit of information and puts them all together to make his life story come alive on paper.

The book starts with just the right pacing. In just two chapters, a lot has already been told, and yet, it is not confusing. With a seamless flow, it keeps a light and entertaining vibe. However, a few chapters more into the book and the pace seems to slow down. The overwhelming details start to burden the mind with every turn of the page. The tone still feels natural, but like any other narration, it has to be cut precisely at the right moment, or else, the audience loses interest. In HomoAmerican, what is meant to be discussed succinctly is dragged out for a much longer period of time. While the overwhelming details take a toll, they do help bring out Dane’s unique persona. The audience not only learns about his life but also his reaction to everything that has happened to him. His thoughts are straightforward, no holds barred, sometimes even unrefined.

It is undeniable that Dane's life is colorful, and he does a wonderful job of touching hearts. There is no doubt that he is able to extend himself through his words. His character remains strong and puts a smile on the reader's face every now and then. Although HomoAmerican only captivates initially, it is empowering through and through. Whether or not the reader is a member of the LGBTQ+ community, Dane’s anger and apathy to the world is relatable and relevant.

Quill says: HomoAmerican: The Secret Society has a good start but it slows down eventually. Nevertheless, it still succeeds in giving inspiration to its readers.

For more information on HomoAmerican: The Secret Socity, please visit the book's website at: www.homoamerican.com

Posted by FeatheredQuillBookReviews at 2:04 PM