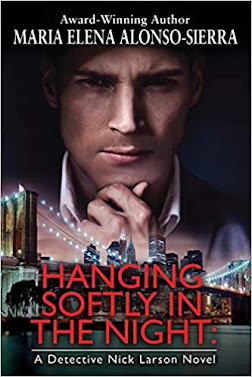 Hanging Softly in the Night: A Detective Nick Larson Novel

Called in to investigate a suicide, Detective Nick Larson and his crew soon discover reasons why it must have been murder. When, where and how are readily established, but who did it and why will be the stuff of mystery for reader and protagonist alike in this eerie tale by award-winning writer Maria Elena Alonso-Sierra.

The scene was set up to look like death by hanging – but the victim, Isabel Creasy, was on the verge of a new and fulfilling change of life. Creasy shows none of the signs of horrific strangulation or psychological collapse that would suggest self-destruction – signs Larson of the NYPD knows all too well. He lives with the haunting image of the death by hanging a few months ago of Angie, the woman he tried to love. That memory will both disturb and compel him as the team will discover another, and another, feigned suicide.

Larson, in tandem with his partner Victor Sacco, are under unusual pressure because there is a flu running rampant in the city that is forcing them to take on extra work. Interviewing and investigating the known friends and colleagues of the bodies piling up in the morgue becomes a constant. And for Larson, there’s more: he’s seeing a shrink to help him process Angie’s suicide, while contemplating, with serious reservations, a romance with Laura Howard, victimized by her psychopathic sister with apparent murderous intent, but more than willing to start a new relationship with the handsome, empathic Detective Larson who handled her case. As more and more clues surface around the first faked hanging, stress is mounting on Larson from all directions. But he’s tough, and that’s how it has to be.

Alonso-Sierra, a world-traveled author, initiated her Detective Nick Larson series with a prequel short story, Mirror Mirror, offering an early portrait of the man and his manner of dealing with crime and criminals. She has fleshed Larson out in this new book: a street-smart yet sensitive guy whose instinct for solving problems enhances his profession, but sometimes causes him to think too much about personal dilemmas. Throughout this offering, the author shows him wavering about a new relationship, while revealing solid reasons for the trauma that prevents him for committing. But his commitment to sniffing out the monster who is perpetrating the faux suicides never flags, as he moves from clue to clue looking for some linkage among the victims.

Quill says: Hanging Softly in the Night is a page-turning read with snappy dialog and hardcore action that will charm fans of gritty, police-procedure whodunits, with enough latest technologies, cross-cultural characterizations and social savvy to engage a newer generation of fans.

For more information on Hanging Softly in the Night: A Detective Nick Larson Novel,please visit the author's website at: www.mariaelenawrites.com

Posted by FeatheredQuillBookReviews at 12:40 PM