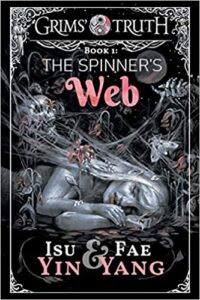 FQ: Which authors would you say inspired you to become writers?

YIN: For me, I’d have to say Tolkien, Lovecraft, Isaac Asimov, Dean Koontz, Clive Barker, and others to be certain.

YANG: This is difficult for me to answer because I didn’t originally set out to be a novelist. I aspired to be an artist, but I ended up being a better writer and it seemed much more achievable to turn such a large project into books. I enjoyed reading when I was younger but I wasn’t specifically inspired by any particular authors. However, I have enjoyed Albert Camus, Haruki Murakami, and the unique descriptions in Clive Barker’s work.

FQ: What books drew you to zero in on fantasy as your chosen genre?

YIN: It wasn’t what I read but what I didn’t read that drew me to work on Grims’ Truth. Fantasy had these great big worlds that felt full and deep. I loved that but I had a hard time suspending my disbelief in a lot of it. I wanted other elements to my fantasy. Something that made it feel rough — gritty even. I like horror and existentialism for these qualities. They feel dirty and often made me queasy, which sounds like a negative, but it really struck me and this stuck with me. In yet another way, I was naturally drawn to sci-fi for the incredible imagery and mind-blowing concepts, but it often seemed too clean, too empty. In the end, I wanted something that had it all. There are authors that do that for me. More and more, I see incredible writers pushing boundaries. I love it. I want to join them in the ultimate storytelling experience.

YANG: Yin’s answer was kind of incredible. I wish I had something that honorable to say but I didn’t really think about the genre that deeply until I had already written for several years. I never really stopped to think, “Oh, wow, what genre should I write?” Grim took a life of its own and I let it drag me along for the ride. Somewhere along the way, I realized that it was existential, fantastical, and even gritty. These are things I love in a story, so Yin and I work hard to bring something unique and full into this world. In a way, I want it to feel real and raw despite the elements of fantasy.

FQ: “For as long as we can remember, we have been either plagued or blessed with dreams of the vast universe we call Euphoria.” What would you say sparked your dreams that eventually inspired the Grims’ Truth series?

YIN: Good question. The Universe? Who knows? My dreams have had a life of their own for as long as I can remember. I’m just the passenger and I don’t tell them how to voice themselves— I just write it down so I can sleep.

YANG: I think not knowing is part of what compels me to write it. Readers often jokingly say that not fully understanding Grim is part of reading it and I feel that it is the same for us co-authors. We understand the Universe entirely but how it got there? Well… I suppose that’s a mystery in itself.

FQ: There are a total of sixty books in the works for this series. What stimulated you to create such an ambitious project?

YIN: Sixty books is not an accident — it’s quite intentional and that's about all I’ll say on that. It may seem ambitious, but I often worry if we can fit it all in.

YANG: Compulsive desire? Obsession. Like Yin said, everything is very intentional. The book count, the arcs, the organization of the series as a whole. We outline our plans over and over to make sure we can fit everything in. We’re asked how we intend to keep things interesting for sixty books and, meanwhile, we’re stressed about fitting everything into sixty books.

FQ: Your strong imagination has produced an incredibly detailed kingdom that includes relatable characters. If you were to put yourselves in the story, which characters would you wish to be, and why?

YIN: Each book is from a new perspective, so I guess I would have to say all of them. I live with them as I work on their part in the story. I’m not sure I’d wish to be any of them though. This is a dark story. I’d like to be someone before the Fall I think. That comment probably doesn’t make sense yet, but it will. LOL, that’s just the way of Grims’ Truth.

YANG: Yikes. I can’t imagine anyone wanting to be a character in Grims’ Truth. They suffer too much. Though, readers might identify with different characters. That said, there’s definitely a character whose lens I gaze through when I’m working. It’s not much of a secret but I still like to see who readers think we’re most like rather than answer directly. It’s part of the fun!

FQ: What do you envision to be your ultimate target audience, and why?

YIN: Adults or teens with adult minds. There are some disturbing situations in the series that would be excessive for a young mind.

YANG: I find that our readers are usually either mid-twenties or in their forties. Occasionally, we have senior readers as well. I suppose we exist in a peculiar corner because of the cross-genres and complexity of the series. Sixty books is a long commitment for anyone. Readers who like to pick up context clues and read between the lines tend to enjoy the series the most. What I hope for is an audience who will debate over details and theorize. The story isn’t black and white, so it needs an audience who yearns to explore the areas of gray.

FQ: Are there any plans for The Spinner’s Web to become a movie?

YIN: I would love to see this story in a visual medium. If only people could see what we see… now that would be something. A movie? The story is so big. I’m not sure how one would accomplish it effectively. A series maybe? Trust me when I say that it’s even bigger and more impressive than we can write so turning it into something people can see would be ideal. We do our best, but it has a mind of its own. I’m open to anyone who wants to tackle this beast with us though.

YANG: I agree with Yin. I’d love to see this in a visual medium but it would need to be a series because of the size of the story. I think we reasoned that a season per arc or two seasons per arc, depending on the length of the episodes, would be most effective. Visually, Grims’ Truth has a lot to offer. Like Yin said, we do our best but we’re still learning to maximize its potential.

FQ: Do you foresee continuing writing fantasy once you’ve completed the series?

YIN: I started laughing a bit when I read this. This series is so massive and encompassing that it is hard to see past it sometimes. In all honesty though, we both have side projects that we work on.

YANG: What Yin said. If I’m being entirely honest, we have this entire series mapped out and it’s a twenty-year plan if we launch an arc a year. Even though we have other projects, Grims’ Truth is all-encompassing. We really must dedicate every spare breath to it. Sixty books isn’t the entire history of this Universe, so who’s to say we won’t branch off into more Grims’ Truth after this? Even we don’t know.

FQ: What words of encouragement would you give to those who have dreams of becoming a writer but are afraid to take the plunge?

YIN: A: You can’t succeed if you don’t try.B: Don’t avoid it — even if it scares you.C: Don’t overthink it. Get it down on paper and then once you have it — rework it until it’s what you want.

YANG: Write for yourself as much as you write for others. There’s a fine balance between the two. Find the right motivations to do it. If you’re passionate, you will overcome obstacles, even within yourself. Despite what you think, there’s always room for improvement. Don’t assume that your first draft was perfect. If you feel it was good, make it even better. Ask yourself what you love in a story and constantly study the craft. Someone out there can appreciate your ideas but it’s important to write well so that they aren’t distracted from your work.

FQ: You include a Book Club Guide at the end of the book. Do you have any other plans that would help engage the reading community with your series?

YIN: We made a full and growing database. It’s complete with images that we both made. You can see how we see the characters, regions, and much more. We have maps of the locations, a general breakdown of the Language of Ages, Clans, Breeds, Factions, and the likes.

Like I said before, this series is massive. We want to help readers immerse into the universe Euphoria— learn about the people, their cultures, governing systems, and beliefs. This isn’t a simple story. If it appears straight forward, look again. Our beta readers have almost systematically returned to The Spinner’s Web after completing Arc 2. I think it takes a minute for people to realize how far we’ve actually gone. It’s a bit deceptive, but that’s just how this story goes. Neither Yang nor I want to keep the lid on this story. I can’t even tell you where it is, and I have no intention of looking for it. That being said, we have mapped it out to the point of obsession.

Go see for yourself at grimstruth.com

The series is designed to take you somewhere else and yet feel an uncomfortable familiarity as the reader delves deeper. There are no accidents in Grims’ Truth — you found a mistake? Are you sure? Maybe you should rethink it and try to imagine the scene in a different perspective. We have multiple main characters so the reader will grasp the severity of what is coming next. No single perspective is without flaws.

Film producer Robert Evans said, “There are three sides to every story — yours, mine, and the truth.”For Grims’ Truth you must follow the varied perspectives to discover the truth and in a universal scale story — there are a few.

YANG: Yin just about covered everything. The biggest part of reader engagement is the engagement that readers have with each other. That probably sounds redundant but since this whole series is about perspective, it takes numerous reader perspectives to piece everything together as well. Beta Readers who sit down with us to discuss the story usually come up with new theories together because they process information differently than each other. We’re frequently asked if it’s possible to figure everything out before the infamous book 12. The short answer is yes. Going back to The Spinner’s Web from later books will make the information you previously missed very glaring. Readers always come back and say, “I can’t believe how much you two put in plain sight. It was in my face the whole time.” Indeed. We’re not trying to pull a fast one.

Posted by FeatheredQuillBookReviews at 11:40 AM