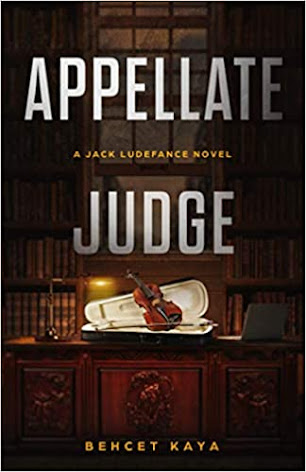 Fresh from a much-needed cruise vacation through the Panama Canal with his sister Margeaux, and his late father’s companion, Deloris, PI Ludefance finds himself agreeing to investigate another case. This time he’s being hired by a distraught woman, Cindy Hastings, who is the devoted daughter of the deceased, highly respected, Judge Russell Hastings of the Florida First District Court of Appeal in Tallahassee. Unfortunately, it’s been a year since his presumed murder, and the police have hit a wall; all initial suspects have been cleared, and there are no new leads.

Judge Hastings was discovered in his judge’s chambers when he failed to return to the courtroom, after a break during an appeal trial where a big pharmaceutical company was found guilty in a wrongful death lawsuit. After reviewing the records from the murder scene, PI Ludefance begins his own extremely meticulous research by reinterviewing suspects (much to their dismay) beginning with the judge’s immediate family, as he attempts to piece together what happened prior to the man’s death. He hopes to narrow down who remains the most likely to have committed the murder. Throughout his exhaustive investigations, Jack uncovers bits of new evidence, and fingers start pointing in a few directions, one of which is the sexually insatiable widow, Kelly, and even possibly one of her many lovers. But PI Ludefance doesn’t let any stone go unturned, and he’s quickly pulled into two other equally plausible directions. One of which is a possible revenge plot spurred on by the recent pharmaceutical company conviction, while the other motive for murder revolves around Judge Hastings’ hobby and weekly pastime, playing violin in a quartet at a local lounge.

So between a grieving family riddled with their own abundant personal issues, pushing and pulling Jack in a myriad of directions, and the possibility that the victim had enemies outside of his family who also could have had motivation to murder, PI Ludefance has his work cut out for him. But will he be able to use his expert investigative skills to delve in deeper than the police could (often going far beyond what the justice system would allow them to), and ultimately extract the critically missing information, and uncover who appellate judge Russell Hastings’ murderer was, or will he get too tangled in the current situations to pull himself out?

Author Behcet Kaya has once again presented readers with an emotionally intense crime thriller. Appellate Judge has classic mystery twists and turns that will keep readers engaged and guessing, but perhaps not as shocking and unbelievable as the previous Jack Ludefance novel. However, this shouldn’t dissuade anyone from either continuing to read this third novel in the Jack Ludefance series, or from picking this particular book up for the first time and reading it. This is because the author presents an excellent standalone thriller mystery with well thought-out characters, and a story that will keep readers hooked from beginning to end. The author also treats his veteran readers to more character development with Jack Ludefance that greatly enhances the overall storyline. This reader particularly enjoys the fact that over the course of the series it is revealed that Jack is a down-to-earth kind of guy who isn't too cool or pretentious of a private investigator (unlike some PIs who prefer to zip around places in their red Ferrari) to shop at a Walmart for clothes, and stay at a budget Best Western Hotel.

Quill says: Get ready for another engaging crime thriller in the Jack Ludefance series by author Behcet Kaya. Appellate Judge is one crime thriller you don't want to miss.

For more information on Appellate Judge: A Jack Ludefance Novel, please visit the website at: www.hollywoodturk.com

Posted by FeatheredQuillBookReviews at 12:57 PM