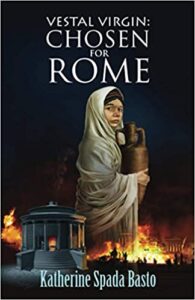 FQ: You must surely have a favorite character in Vestal Virgin, someone you identify closely with - who would that be?

BASTO: My favorite character is Cornelia, the main protagonist and narrator of the story. She begins the journey as a young, spoiled and demanding girl. Once she accepts that she is “Chosen” she matures, begins to question authority and takes a stand and speaks “truth to power.”

FQ: How did you decide to make the Vestal Virgin Cult the centerpiece for this latest historical novel?

BASTO: I’ve always been interested in Pagan Cults and Goddess Worship through the ages. Both their rise and fall and the historical context of how it happened fascinates me. The time periods when religions clashed and were at a crossroads of change is compelling. I had previously read about the Vestal Virgins and thought it a unique subject.

FQ: How long did it take to write this work, considering all the fact gathering that must have been involved?

BASTO: Two and a half years. My first novel, Days to the Gallows, about the Hartford Witch Panic of 1662 was published in December of 2019. Shortly after, I started my research on the Vestals. I was pleasantly surprised with the plethora of information on the Vestal history. The highlight of my research was going to Rome, walking the old Pagan sites such as the Spring of Egeria, the Forum itself, and the Pons Sublicus, the oldest bridge in Rome. Traveling to Rome enhanced and greatly improved my understanding of the time period I wrote about.

FQ: Since a sequel is planned for this, built on the parting of Cornelia and Lucius, what historical period/cultural events will provide the focus of the new work?

BASTO: Vestal Virgin: Chosen for Rome ends with the parting of Cornelia and Lucius, with the implication he will return. The Epilogue explains the demise of Emperor Nero. The next book will take place as the new Emperor Vespasian (69-79-AD) begins building the new “Colosseum,” the Christian sect becomes stronger, and the Vestals and Rome itself are challenged with the changes to the cult and Empire. The next novel will also feature Domician, an Emperor worse than Nero in his destruction.

FQ: Do you see parallels in modern times to the rise and fall of Rome as depicted in your book?

BASTO: My first book in the series focuses on the Fall of Nero; the fall of Rome came a few hundred years afterwards. There are certainly parallels between an autocrat and tyrant like Nero, whose answer to a threatening cult like Christianity was to burn them alive at the stake and to make a point to those others who were interested in the new sect.

Nero’s power in Rome was absolute. According to the research, he was behind the Great Fire of Rome, yet during the inferno, he was at the seaside. He also benefited from the fire by taking over the new “real estate” to use the scorched land for his future palaces.

Nero was a tyrant. One can see in our present times, there’s many “dictator wanna bes” and it’s clear if there are no checks on absolute power, these autocrats get others to do their dirty work, then wash their hands afterward and deny any wrongdoing. There will always be tyrants in our government unless checks and balances are in place.

FQ: Do you have a favorite author who has influenced your choice to compose historical novels centered on a strong female lead?

BASTO: There are many! When I was a middle grade teacher, I read and recommended to my students the YA author, Ann Rinaldi. She always has a strong female lead and uses historical time periods such as the Revolutionary War, the Civil War and the Salem Witch Trials to name a few. I also love Laurie Halse Anderson, an award winning author of Chains and Forge. She also has strong female characters and brings history to life and spins a good yarn as well.

FQ: Which episode in this wide-ranging story was the most compelling to imagine and compose?

BASTO:I personally enjoyed “imagining” some of the rites and rituals of the Vestals, in particular the Feast of the Bona Dea. A women only rite, this was one of the only times a woman in Rome could drink wine, called “milk.” Cornelia is allowed to partake in the festival and drinks too much.

I learned a lot imaging these rites and this also includes the chapter on Cornelia’s initiation. The Romans were a very superstitious lot and everything had to be done in a certain order or “bad luck” could ensue.

FQ: What advice would you offer to other women who might wish to undertake works in the historical novel genre?

BASTO: First, read widely in the genre! See what time periods you are drawn to. Do the research and weave the facts with your own imagination. And try not to mess with the facts known in history. This is a no-no! Make your protagonist a strong, enduring character who grows throughout the story.

I find the more research one does, the better. If you can visit the sites you are writing and researching, you will have a strong foundation for what I call “worldbuilding.” You want your reader to feel like they were present way back when. Details into what people wore, what they ate, weather, how they spoke will all strengthen the worldbuilding and setting.

Yet you want to make the history accessible for contemporary times and this includes access to unchanging human emotions such as love, fear, anger, sadness...all emotions that humanity has carried with them throughout the ages. This helps to develop your characters into three-dimensional people, who all have their hopes, wishes and dreams.

The exciting aspect with historical novels are that there are so many interesting characters that have their own stories to tell, within their own time periods, and events. Perhaps your leading character is created by you; this is great, as long as you play by the extenuating circumstances you write about.

Enjoy the process of research and bringing the characters to life. The greatest compliment I receive from readers is that they write, “I enjoyed the book and learned a lot.” This in my opinion, is a winning combination.

Posted by FeatheredQuillBookReviews at 7:07 PM