#BookReview - Rats in a Maze 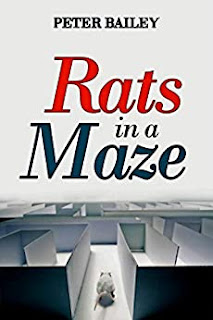 Rats in a Maze

A traffic accident morphs into everything bizarre in Peter Bailey’s newest novel, Rats in a Maze.

NYPD Detective Ray Fisher and Brad Lahoti, his rookie partner, investigate what Fisher believes to be just another traffic accident. But the odd collection of items, including explosives, that they find turn the case in another direction. Before they realize what’s happening, the detectives find themselves amid a wild goose chase in their pursuit to crack the case—nabbing Jessica and Milo Sorenson, an immensely wealthy couple. In the process, the duo fall victim to what Ray believes is mind control. To test his theory, he recruits two agents to see if the same thing happens to them.

The plan goes awry, and Ray and Brad end up suspended from their jobs for a month. Ray and Brad, now weaponless and marked men, go into hiding, running from one place to the next once they realize they are being followed. Just when they think they’re safe, all hell breaks loose. Oddly, coming to Ray’s rescue is Jessica Sorenson. Jessica divulges an unusual tale to explain her fugitive stance. The problem is that Jessica is not the only one on the run since agencies consider Ray to be a murderer and are on the lookout for him. While Ray is clueless as to what to do next, Jessica has a plan. What unfolds is nothing but bizarre.

British author Peter Bailey pens an eccentric story in his third book, the first with Moonshine Publishing. Ray Fisher and Brad Lahoti fit the stereotypical descriptions of an offbeat pair, continually struggling to work as a team. While principal character Ray reflects a hardened, old-school, noir detective, Brad’s supporting role follows in the opposite direction; he’s gay and highly tech-savvy. What binds them together are their dysfunctional backgrounds—Ray’s crumbled marriage and Brad’s estrangement from his family.

Bailey keeps his chapters short and entertaining, filling pages with detailed background descriptions and imagery heavily laced with hilarious metaphors, hyperboles, and similes. Amid a small stereotypical cast, Bailey incorporates scenes that befit TV police program plots—at least initially. But just when you think you can see where the story heads, Bailey shifts things around to the point that there’s absolutely no second-guessing.

Any hope for anticipation gets thrown out toward the latter half of the plot when Ray's life morphs into the unexpected and the story turns into all things dystopian with a downright Twilight Zone feel to it; the story, shifting from mystery to thriller/horror. How it fits in the broader scheme of things is anyone’s guess as Bailey leaves that section open to his readers’ imagination.

Quill says: Riveting from beginning to end, Rats in a Maze is a one-of-a-kind noir read.

For more information on Rats in a Maze, please visit the author's website at: peter-bailey-books.com

Posted by FeatheredQuillBookReviews at 12:28 PM