#BookReview - Raider of the Scottish Coast 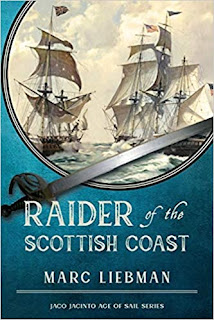 Raider of The Scottish Coast

The subject of the American Revolution is something I truly love reading about. Perhaps it’s the state of the world in which we live today that makes me want to travel to the past; or perhaps this specific era is one I want to learn more about because it’s rarely focused upon in the fiction world. Yes, even after all this time, WWII is still the most popular. However, when it comes to this tale by the remarkable writer Marc Liebman (who I first became a fan of when I discovered his Josh Haman series), I have to say this is one of the most enthralling war stories I’ve read in a good, long time.

Told from a very personal backstory, it is the year 1775. We meet Darren Smythe, a young man from Gosport, England; and Jaco Jacinto, a young man from Charleston, South Carolina. Their paths cross when Jaco signs up to become a member of America’s Navy. His personal feelings and ideals include the fact that he wants to see his country gain independence; to become a nation that will live as one of the very few free ones in the world.

Darren's goal is to become a member of the British Navy because that has been his dream since he was a young boy. He wants a future career path that will lead him down the road of military service, where he will one day don an officer’s uniform and be up among the elite when all things are said and done. Whether it be for personal gain, a good career or a belief in freedom, both young men want to see the world and work hard, and they do. The only thing they weren’t counting on seeing is each other...constantly.

Almost as if there’s some heavenly power involved, Darren and Jaco end up being in the same place at the same time on a variety of occasions: Whether they are traveling, heading to events, fighting, or working with historical figures who include some of the grandest leaders (and some of the worst) ever known, Darren and Jaco end up building one of those relationships where even though they’re on opposite sides of the fence, they consider the other to be a friend.

Readers will “watch” this relationship thrive while it is tested every inch of the way. From the cold winds of Nova Scotia to the warm waters off the Bahamas, this duo will have to survive each and every win and loss that occurs. Because of their choices and their homelands, they should be mortal enemies; even they realize that there will be a final battle played out at some point and they will have to fight each other in order for their personal needs to be fulfilled—but they continue to feel respect for one another. For those who find themselves locked into this read (which will genuinely be anyone who picks up the book), you will feel that sense of camaraderie and caring as it was with North and South by John Jakes—that these two friends will have a future where they can actually live as ‘brothers’ in a world that has learned to forgive.

The in-depth research behind this tale was highly interesting, and the author was able to take all facts and intertwine them with some of the most creative and engaging characters I’ve seen in this genre. Life on the high seas is both exciting and frightening, and the intelligence factor of this book is sheer perfection.

Quill says: This action-packed plot will have you “setting sail” on Amazon in order to get more of this author’s fantastic books.

For more information on Raider of The Scottish Coast, please visit the author's website at: marcliebman.com

Posted by FeatheredQuillBookReviews at 10:45 AM