#BookReview - A Lion in the Grass 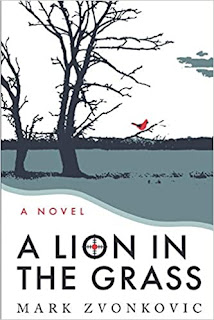 A Lion in the Grass

Author Mark Zvonkovic undertakes a different perspective on the classic espionage novel in his latest book, A Lion in the Grass.

Spanning over an impressive six decades, readers follow the life of Raymond Hatcher beginning in 1942 at the tender age of seventeen. Eager to enlist in the army, but because of his remarkable intelligence, extensive knowledge of European geography, and his fluency in numerous foreign languages, he is encouraged by his father’s friend to expand his horizons by joining the navy and the Office of Strategic Services. There he begins intense training and progresses through its ranks into becoming one of their best agents. At first his assignments include the countries of Vietnam, Indochina and Yugoslavia during World War II, but throughout the story Raymond’s contacts and experiences spread worldwide, oftentimes aligning themselves with major events in history. As the years move forward, Raymond’s knowledge and expertise increase exponentially and he hooks up with and shares some of his experience in the field with Lieutenant Commander Bradley Wright. Over the years both their careers and personal lives flourish as they are married and have their own families, experience tragedies and triumphs, and are assigned different missions. For both of them, their careers are more than just a means of employment. For Raymond, it grows into a lifetime of obsession that flows through his blood, and lasts far past his retirement.

An interesting twist of this novel is that not only does it incorporate the many decades of Hatcher’s life and fellow comrade in arms, Lieutenant Commander Wright, but it also occasionally switches perspective towards another young man living in France at about the same time. Georges Piquart came from a wealthy family and had a career in the secret intelligence in France. Years progressed with marriage and family for him as well, but unfortunately tragedy struck, and he was informed that his childhood friend was killed in battle. In order for Georges to fully understand that his friend was no longer around, and make sense of what happened, he fabricated an elaborate story blaming the Americans and their military for conspiring to kill his friend. As time went by, he would come to terms with the reality, but his anger would ebb and flow, and hatred for the Americans would remain a constant throughout his life.

The Lion in the Grass is not a light, quick read; it spans nearly an entire lifetime of the main character, and the lives of those who he encountered throughout his career. Overall the story was well-written and the plot engaging; readers will be eager to discover what will happen next. It is clear that the author did an extensive amount of research in order to place his characters in such accurate and detailed settings in history, beginning around World War II, and ending in the present day. He also does a good job at depicting the highs and lows of the life of an undercover operative which includes both the usual daily interactions with family and friends, as well as exciting events filled with heart-racing action. While this novel is for the most part a good read, sometimes the story becomes a bit bogged down with detail and switches through events a little too frequently, at those times it becomes a bit of a slow read. However, it is recommended to stick through this read and you will be rewarded with a dramatic cliffhanger ending that will definitely make a great beginning for an excellent sequel.

Quill says: If you’re in search of an extensive tale of espionage that is more than a simple spy vs spy novel, be sure to pick up A Lion in the Grass.

For more information on A Lion in the Grass, please visit the author's website at: markzvonkovic.com

Posted by FeatheredQuillBookReviews at 6:18 PM