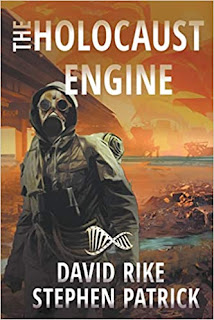 FQ: Is there a story behind the title? How did you come up with it?

PATRICK AND RIKE: The title refers to the underlying theme of the book, which is how our worldview can impact the roles we take in our lives. Many facets of modern life, the “engine,” encourage us to view ourselves as the main character in our life’s story, relegating everyone else to a minor role. A perversion of the fictional “Hero’s Journey,” it can turn daily life into a need to fight “villains,” slay “monsters,” and relegates others into two-dimensional roles as supporting characters. This also creates a high bar where we often fail, and failure can result in conflict, depression, and for some, an identity crisis (“if I’m not the hero, who am I?”). It can even inspire troubled individuals to aspire to being a self-sacrificial martyr or even become the villain, forcing others to take on the role of hero.

The engine can be seen in everyday life, as we feel called to take on the role, authority, and responsibility of being the hero in our lives, responsible to save the world and reap the rewards we deserve. When we fall short, it can tear apart relationships as we fail to save others or as they fail to play their role in our story. It can destroy families and communities and can be seen in many aspects of our modern social systems. When we no longer connect as a community, but as individuals pursuing our personal climatic triumphs, it can lead to devastation and destruction. Describing this machine of devastation led to the name The Holocaust Engine.

Overall, the story is focused on a health crisis that spirals out of control because, at the beginning, everyone involved sees the disaster through the lens of their own personal narratives, and so they can’t respond effectively. Their ability to combat the machinations of their narratives will be essential to their survival, and it can serve as a metaphor for how we can survive the modern world.

FQ: How did the two of you begin working together?

PATRICK AND RIKE: We work together and realized years ago that both of us were writers. This led to reading and editing each other’s material, and when David had the initial idea for The Holocaust Engine, we decided to co-author the series. David wanted the story to track a societal collapse as it occurred. However, since most post-apocalyptic fiction begins well after the collapse has taken place, there was a challenge to accurately model a community losing its essential services because of a quarantine. Stephen has a background in disaster planning and response, and I (David) never could have written a realistic stages-of-apocalypse story without his help. Strangely, this series began four years ago, before many of us were living inside of a quarantine.

PATRICK AND RIKE: In our case, the collaboration is a kind of ‘odd couple’ writing team. Stephen is a stream of consciousness writer who likes to write in short bursts of creative energy, whereas David doesn’t usually put words on page until he’s outlined the section, sometimes down to individual paragraphs. The benefit is the ability to harness the best of both, explosive creativity wrapped up in a narrative that draws the reader into a satisfying story arc carefully outlined to achieve the specific goal of each arc and beat.

It serves us well in multiple POV pieces, such as books 1 and 2, where we assign sections according to our style or focus, edit each other’s work, and draw out what we like of each other’s style and voice. The pitfall is something we’re dealing with now as we write book three: merging two very different writing styles into one single voice. We got a taste of it in book two as four POV’s shrank down to two, but the real test comes with book three, which has a single third-person POV. Our plan there is to each take on a bit of the other’s style. So, Stephen is doing more of the overall outlining, and David is trying to write in quick bursts, something he's never done before.

FQ: Why did you choose to set your novel in Key West? 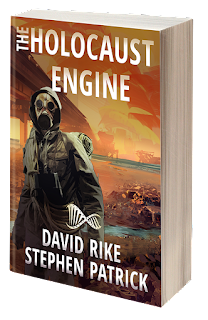 PATRICK AND RIKE: The story centers on an isolated community during a worldwide epidemic. Thus, we needed the setting to take place somewhere geographically isolated. Key West is at the bottom of a tiny island chain, over a hundred miles south of mainland Florida. Those islands are connected by a single two-lane highway bridged between each island. Knock out any one of those bridges and Key West is cut off.

For Stephen, it presents a unique location for a disaster. Unlike pandemics or traditional global apocalyptic disaster settings, where everyone fights for survival, an isolated Key West can be completely cut off from the world yet kept alive and supported by the outside world. This change to the traditional resource management crisis creates an intriguing backdrop for a thriller. With the US government functioning as a “Door Dash” for an island in quarantine, the entire island begins to look familiar to many of us who have recently been isolated in their own homes. At least...until the survivors realize that being stuck on the island is a bit less paradise than they expected. And Key West is just one of the most amazing and unusual places on the planet.

FQ: How have your experiences throughout your lives influenced this novel? If they haven’t, where do you draw your inspiration from?

PATRICK AND RIKE: In places, the novel is drawn directly from our own experiences, sometimes representing the “worst case” scenarios we’ve tried to anticipate and avoid. Stephen wrote the character of Perry Nelson, a police captain in charge of the quarantine zone’s disaster response, from his experiences in disaster response. While not biographical, the challenges do pull from the things that keep him up at night. David’s a detective lieutenant and was the supervisor in charge the night that a tornado devastated our city. We sprinkled the narrative throughout with actual events.

One of the more unusual characters, Max-a-Millions, was inspired by a seat-mate on a flight from Orlando to Dallas. Stephen was trapped beside a fast-talking, hyper-embellished, uber-planner salesman for three hours, and knew that he would have a place on the island.

FQ: What’s the story behind Bontrager’s disease? Is it based on any existing diseases? If not, how did you come up with the symptoms and the progression of the disease?

PATRICK AND RIKE: In the book, Bontrager’s is a lethal form of encephalitis, a brain virus. In reality, we didn’t base it on a specific disease. Acute encephalitis can induce paranoia, confusion, and even violence. We pulled it more from synthetic cannabinoids such as K-2, which can cause similar symptoms, including increased heart rate and respiration, and psychological responses such as confusion, paranoia, and violence. In some people, the heart over-stresses itself and they die. This physical manifestation is something we have both seen first-hand, and it is a terrifying and deadly exhibition of the human body set to a maximum (and fatal) output.

FQ: What does your writing process look like? Do you use outlines? How does your process differ when you write alone?

PATRICK AND RIKE: The dilemma of being writers while working full-time means that Stephen is having trouble writing about a pandemic while he’s busy actually fighting one. When we can meet, we start with a creativity drill -- something like, “Give me the most burned out remake of 2019 and tell me how you’d fix it.” It gets the storytelling juices flowing and takes our mind off the challenges of the current year. After that, we get to The Holocaust Engine and each of us usually has questions for the other, like, “Okay, what condition would the hospital be in at the end of chapter eight?” Then we go over what each of us is currently working on. The last task is a kind of a’ la carte doling out of assignments: “I’ve got time this week to work on chapter ten. You want to take a crack of the food drop scene?”

PATRICK AND RIKE: Since The Holocaust Engine is a story...about how people now tend to think of their lives as a story, it gets a bit ‘meta’ with the concept of genre. We wanted to write something that all readers could enjoy, so the entire series is plotted onto a familiar good-versus-evil action storyline. For those seeking escapist entertainment, they'll get a knockdown, drag-out, fire-every-bullet-in-the-gun, then-finish-the-fight-with-knives-clubs-hands-anything action tale. We hope some readers will dive into the overriding themes, and find that each book in the series is written in a different genre than the others, and each POV character is written with a different narrative voice, common to different types of genres. The trick with that was getting the various voices to form something additive, and to try and keep the transitions from being overly jarring. While some readers may find that challenging, our hope is to provide a satisfying experience for different types of readers, and for some, a few different layers to explore within the story.

FQ: What are some of the other genres the two of you are interested in collaborating in?

PATRICK AND RIKE: The beauty of a writing partnership is that you have built-in challenges and there is not really a safe “comfort zone.” Our creativity drills have uncovered a few genres and areas that we would never have explored individually, but that we want to try as a collaboration. We’ve got notebooks full of ideas that we’re hoping to mine that could take us to the stars, into the past, to contemporary times, and a few that are a bit harder to explain. Genre-wise, we're hoping to bring readers from The Holocaust Engine with us to our next adventure, but we can promise it will be something different.

FQ: What advice do you have for writers looking to collaborate on a project for the first time? Are there any techniques they should explore or pitfalls they should avoid?

PATRICK AND RIKE: I (David) enjoy rock ’n roll documentaries and discovered a painfully obvious truth while watching them. The successful bands have an overriding mission: “At the end of the day, it’s all about the music.” Even when they disagree, everyone tends to be very supportive and appreciative of the other band members’ contributions. I imagine it’s like that in any collaborative project. Decide at the beginning what you want to create. Don’t make it all about yourself and you’ll get the most out of the collaboration. Not coincidentally, that’s one key way to slow down The Holocaust Engine. Don’t try to be bigger than the art. Let the art be the thing, and let it transcend what you could ever do on your own. On the other hand, if you have a band where the various members are in it for themselves, you’ll get chaos -- not a road you want to travel. Unless we’re still talking about rockumentaries, and then, I’ll just be honest, those are the really fun ones to watch.

Posted by FeatheredQuillBookReviews at 12:02 PM