#BookReview - The Rape Trial of Medusa 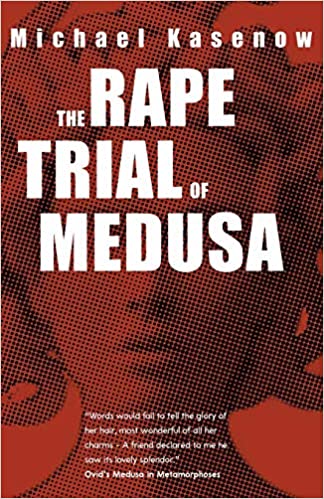 The Rape Trial of Medusa

History is one of the few things in life I absolutely love. From amazing facts, to interesting people from our past, to myths and legends that either cause the pulse to race or the heart to stop—I love it all. So when you get a title to review with the word “Medusa” in big, bold letters on the cover, that excitement is amped up ten-fold. But, I have to say, this was even more heart-pounding because it wasn’t the well-told legend of the woman with snakes in her hair; this author took a modern take on the myth making it even cooler!

We begin on the steps of the New York Courthouse in Manhattan; home of the New York Supreme Court. This bustling city has a protest going on outside as reporters shove their faces in front of cameras in order to get the best shot of the day. The protesters, however, hold up some odd signs and lob words and accusations out that range from things like “Victim” to “Seductress,” as they await the arrival of the infamous defendant. Yes, that defendant is Medusa, herself...live and in person in NYC.

Readers are swept into the plot immediately. An “Egyptology Expert” is on hand to denounce the fable that this woman’s gaze is deadly and can turn men to stone. He also speaks with one of the reporter’s about the trial coming up and that almost the entire Olympian family has agreed to be called to the stand. By the way, this Olympian family – all throughout history – is still the richest, most powerful corporate family on the planet as of today. They also have their little closet-full of perversions that people like to gossip about, so many are interested to see what, exactly, will come out during the trial. One Olympian not coming to the trial is Ambassador Poseidon, who has invoked “diplomatic immunity.” (I know, right? It’s cool.)

So, anyway, Poseidon is the one being accused of rape, which one former Senator just can’t understand because he served in Congress with Poseidon and he can’t believe that the Ambassador would ever do something like that. Before the trial began, the Olympians stated they would only agree to move the trial venue to NYC from Greece if they got all the rights to the documentaries, TV shows, etc., that would come from this. (A way to make even more money.) Now, if Medusa loses, she will be banished for all time. If she wins, however, she will get back her youth, beauty and freedom.

Medusa arrives, dressed in garb that will keep her snakes under control so that they don’t hurt anyone. Her attorney, Maggie Harper, is the woman who wants to help this defendant win; she also has a huge role in the story. There are a lot of people who will be showing up, including Perseus, who is the son of Zeus and the future CEO of the family corporation. Zeus has already sent mean texts out condemning Medusa, and he now watches her arrival at court from the War Room in his house, sitting beside his wife, Hera. He basically has the prosecutor in his back pocket – telling him if he wins, he’ll become the next governor but if he loses, he’ll be cleaning toilets.

The “story” comes out that Medusa was alone in Athena’s Temple and was raped. Athena blamed her and actually cursed Medusa, transforming her into the snake-headed evil woman known by all, and exiling her to an island. After all this time, Medusa will now get her day in court so that justice can be done.

Okay...we are talking the trial of the century here. The historical characters, the present-day characters, the plotlines that show both past and present – all of this is wrapped up into a crime drama, a thriller, a soap opera, and more. You actually, at times, feel like J.R. Ewing should walk into the courtroom in his Stetson at some point – it’s that cool! So was Medusa raped? If so, who really was behind the crime? You have GOT to read this one to find that out, and a whole lot more.

Quill says: Taking history and giving it a spin is one thing; this book takes it and turns it into a merry-go-round that never stops!

For more information on The Rape Trial of Medusa, please visit the author's website at: www.michaelkasenow.com

Posted by FeatheredQuillBookReviews at 2:44 PM