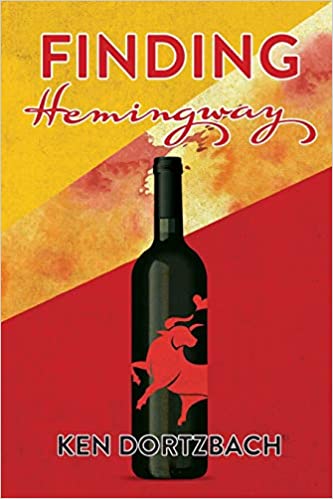 A young woman follows an elusive, almost mythical icon and finds more than she ever imagined, in this passionate, intelligent, international saga by Ken Dortzbach.

Callie McGraw is a Yale-educated lawyer between jobs. She’s watching the old film production of The Sun Also Rises, one of her favorite books from her teen years, when Ernest Hemingway calls. How can this be? He’s urging her to go to Spain now. She has a job offer that gives her six months leeway, and some money in the bank. So – why not? She arrives in Barcelona and is immediately befriended by Trevor, an American backpacker at loose ends. The two can travel together companionably. In a wild bar in Madrid, they meet Claudio, something of a playboy, and like them, something of a lost soul.

The twosome becomes a threesome, hitting the Hemingway high spots. In the Picasso Museum, Callie will experience absorption in the grey desolation of his Guernica and a disturbing insight about herself in The Embrace in the Street. She has a brief fling with a Frenchman, but only Claudio, who seems to be possessed by the duende (spirit) of Spanish culture, truly holds her attention. Hemingway, in his subsequent phone calls, seems to be giving her advice about her love life while directing her further travels, including a trip to Pamplona to run with the bulls. Then the time comes for her to leave, and head to California and her new job. Will she go? Will Claudio stay? Decisions will be made, down to the last possible minute.

Author Dortzbach, like his heroine, has had a law career, and like her, has traveled abroad and developed an attachment to the vibrant landscape and culture of Spain. Kudos to Dortzbach for making his protagonist a female, fully revealing her intellect as well as her intuition. Callie finds herself capable of reliving the very macho Hemingway’s disillusionment, ennui and rebirth as depicted in The Sun Also Rises.Dortzbach offers his heroine several opportunities for romance, but the deeper love is that which she must give to herself. A chance meeting with a woman who knew Hemingway reminds her that she has a “strong” and she must use it. Dortzbach is clearly an admiring student of Hemingway, and shows his own “strong” in this panoramic drama harking back to a rich era in American literature.

Quill says: Combining magical realism, the magic of Spain, and real magic in a voice from beyond the grave, Dortzbach has created a strong female lead and an enchanting “coming of actual adulthood” saga in Finding Hemingway.

For more information on Finding Hemingway, please visit the author's website at: kendortzbach.com

Posted by FeatheredQuillBookReviews at 1:49 PM