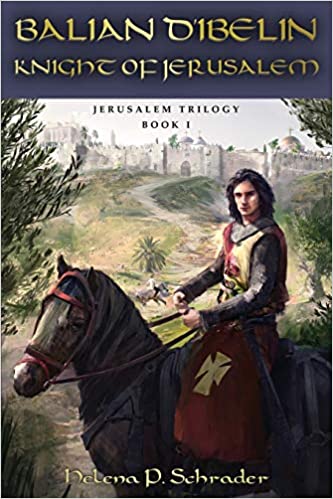 There are things you need to know up front in regards to this book, especially if you are a huge fan of this author, like I am. This is actually Book 1 of a “biographical” trilogy spotlighting the interesting life of Balian d’Ibelin. Now, if readers remember this amazing man from Helena’s previous work, it’s because in 2014, the first edition of Knight of Jerusalem was released after two years of research. But, as the author states, after learning even more about the Ibelins, as well as the Crusader states, it turned out that Balian needed a longer look when it came to his life, work, the battles he fought, and the man he truly was throughout his life.

Upon diving into this new series, you will once again be transported back to Jerusalem and learn more about the always fascinating land of “milk and honey.” Not only will this in-depth look perhaps alter your views of Jerusalem, but the author also gives us much more to think about when it comes to the look, feel, and beliefs that were held dear in the twelfth century.

Born the same year his father died, Balian’s beginnings included a mother who remarried. As the third son, his inheritance was zero; however, Balian was later granted the right to marry a dowager queen who brought quite a bit of financial security to the union. When it comes to documentation, Balian is best known for what falls between the years of 1177 and 1192. But, as this author always does, the fictional pieces of this story are brought to life with a true richness and color that shows in detail the path Balian took to eventually become a crusader noble of the Kingdom of Jerusalem. As the Lord of Ibelin during those pivotal years, he became the leader of the defense of the city during the siege of Jerusalem in 1187, and readers will be amazed to watch Balian’s life in this book as it all starts to play out.

We see this world at a time when the Holy Land was predominantly Christian. We also see a world where different faiths lived together in harmony; not pain. We are introduced to Maria Comnena, Queen of Jerusalem and the wife of King Amalric, and learn about her beginnings, her feelings about her marriage to Amalric I, and the cravings she had for more. This much-maligned woman, who was later called “scheming” by English chroniclers, is shown in other ways as Balian is inserted into her world, and every emotion is felt by the reader. From passion to anger, you can almost feel the building of a war that will explode further down the line as the relationship of Balian and Maria commence.

Although Balian has been a character in the Hollywood realm, portrayed as a blacksmith, it is the Arab writings that focus on Balian as being far more “like a king.” When it came to the roles of warrior, diplomat, and even servant, Balian had the skills and talents for each; he even had the backbone and strength to defy the famous Richard the Lionheart.

As a fan, it is no surprise that I loved this book. As a person who is intrigued by history, Helena has chosen to do this "historical biography” on someone who has now found a place on my list of the most memorable souls who ever swung a sword. I cannot wait to read the next phase of Balian’s life story as it unfolds.

Quill says: This goes beyond the “historical” label and straight into the realm of fascinating!

Posted by FeatheredQuillBookReviews at 1:47 PM