#BookReview - Awaken the Three (Book 2 of the Highglade Series) 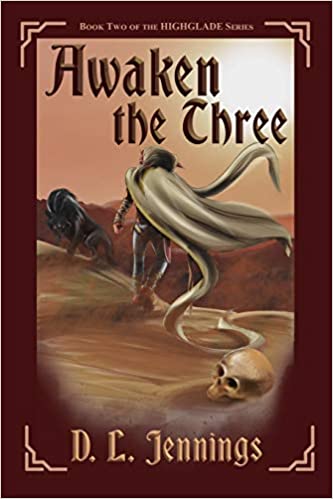 Awaken The Three (Book 2 of the Highglade Series)

In this twisting tale, a sequel to his earlier, award-winning work, Gift of the Shaper,author and military vet D. L. Jennings has carried his mythic characters to another level of understanding invoking a further, even more perilous quest.

There are both humans and human-like creatures in Jennings’ fantasy world, and many are gifted with supernatural powers. The Athrani, with their strangely colored eyes, can change things in a gift called Shaping, and worship the Shaper of Ages; the Khyth worship the Breaker of the Dawn, can “break,” or manipulate, matter and have eyes like smoke; Farsteppers move mysteriously through the Otherworld, an etheric realm from where Khyth and Athrani beings derive their distinctive abilities. And there are those who are apparently, simply, humans, like Thornton Woods. Thornton, perhaps echoing the Nordic myth of Thor, is guardian of the Hammer, a weapon shrouded in mystic lore.

As the saga opens, Thornton is trying to resuscitate his sister Yasha after her “breaking” – her skin is blistered and her hair, a flaming red. The siblings will travel with an Athrani army, allowing them to see marvels they could never have imagined. And Dailus - an Athrani half-breed known as a “half-eye” – is being imprisoned for treason. Thornton will be forced to meet with Dailus who was an enemy of his father and who will tell him of his missing father’s true fate. As Jennings’ multi-layered intrigue develops, war is underway, affecting all their lives, and Thornton is drawn into a world-shaping mission: to awaken three sleeping beings - the Traveler who rules the day, the Holder of the Dead, controller of night, and the mystic female Ghost of the Morning. This danger-fraught task brings Thornton into a unique alliance with characters of different social strata and some very different motivations, and includes his nemesis, the devious Dailus. Their determination to challenge enormous, enigmatic forces may just offer Thornton a chance to free his father and Miera, his childhood-companion-turned-goddess, from their Otherworld prison.

Jennings, who began writing in earnest while deployed overseas in the Air Force, has an imagination as vast as any of the greats of fantasy creation, and the perspicacity to engage and direct his readers. His Highglade universe is complex yet orderly. He provides a lengthy glossary that enables readers to get to know not only the territory and its history better, and offers brief, helpful portraits of his plethora of central characters. This second volume of the series, at over 500 pages, rewards readers’ efforts with interlocking tales of heroic males and females contributing on an equal footing, in conflict with havoc-wreaking tyrants and tricky evildoers bent on wrecking the proposed plans for unity and peace.

Quill says: Awaken the Three is a stand-alone, action-filled mytho-fantasy epic, and those who sense and savor its deftly woven story strands will doubtless rush to read the earlier book in the Highglade series and excitedly await the next installment.

For more information on Awaken The Three (Book 2 of the Highglade Series) please visit the author's website at: www.dl-jennings.com.com

Posted by FeatheredQuillBookReviews at 2:56 PM