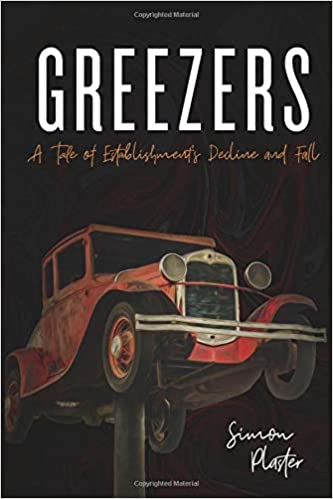 FQ: Okay. Lay it on me. Where do you keep getting these ideas? I mean, really, where/how did the idea/concept for this new book come about?

PLASTER: Hard to say, Amy. It might have been that old movie song that came into my head: "Grease is the word, is the word, is the word..." It's in the movie, Grease, that the two worst age miscastings in history were made: The bad boy, Kenickie -- leader of the black-leather-jacketed T-Birds -- was played by a guy who was 28 at the time. Even more egregious, his supposedly seventeen-year-old girlfriend -- bad girl Betty Rizzo, leader of the Pink Ladies Gang -- was played by Stockard Channing; a good actor but for crying out loud, she was 34 -- twice Rizzo's age -- when the movie came out. You'd think the latter dubious achievement would stand as the all-time record, but . . . Well, here's how one of your fellow book critics put it:

"In GREEZERS: A Tale of Establishment's Decline and Fall, Plaster satirically allegorizes United States resort to the decrepit monarchial system of the United Kingdom: Crowning Joe Biden -- arguably more of a mediocrity than even Prince Charles in their respective primes -- now six years deeper into dotage than the heir apparent to the British throne. As deftly dramatized by Plaster, neither has done anything to merit high office other than to stand and wait for his betters to go by the wayside."

Henrietta didn't realize she was part of an "allegorization" of course. She just went to work and the next thing you knew, a tale had been told.

FQ: Tell me your views on Henrietta. She makes me want to move to Oklahoma City just to hang out with her. Is she about to make many more tales while in the role of private investigator?

PLASTER: I wish you would come out here and lend a hand. Henrietta lacks good influences around her. As for her private detective career in particular, she needs a mentor such as she had in Harold Mixon during the early stages of her journalism career. Her current boss, "Lero O'Rourke ...Well, as they say out here about doofuses such as him: If stupidity was dirt, he would be an acre.

FQ: What do you think Henrietta's major characteristics/ traits are that allow her to stand out and make readers enjoy her so much?

PLASTER: Henrietta is uneducated, but is her own self keen as an acre of garlic. She is pretty as a picture, but not spoiled. She is honest to a fault about things that matter. Most of all, in my book, the thing that makes Henrietta a special gal is that she has pluck.

FQ: With this world as odd as it is now, what is your personal view on this pandemic and how books are "necessary" more than ever?

PLASTER: Information about the pandemic is too confusing for me to grip an opinion. As for books, I would have to say that -- except for the writing of them that gives me something to do with my time -- I think they are less "necessary" than ever.

PLASTER: I am not much of a reader, Amy. Don't have the idle time.

FQ: What is the next idea? Where will we be the next time we see Henrietta?

PLASTER: Last call I heard from the "moose" is that Henrietta is still working for Lero O'Rourke, who has changed the name of his private detective agency to FISSION FYI and somehow found work doing so-called "opposition research" into this-and-that. I doubt it will go well for anyone involved.

FQ: Considering life in 2020, do you feel the "establishment" is declining and falling much like the subtitle of your book?

PLASTER: Amy, for crying out loud, our next President is likely to be seventy-seven-years-old when he takes office; same age as Ronald Reagan when they carted him out of the White House after eight years of occupancy. Our new President's likely garbled recitation of the oath of office is not likely to inspire confidence; not like, say, John Kennedy at age forty-three, when his rotting father -- another fishy-eyed Joe -- was five years younger than the "son" we are getting now. Biden's Veep is bound to be a nobody and next in line is Speaker of the House, Nancy Pelosi, whose brain cells are also wore out. The so-called "establishment" that let this happen is mentally, morally and fiscally bankrupt in my book...

FQ: I have interviewed you many times before, so just for fun: Shakespeare, Colonel Sanders and Donald Trump are sitting at a table with you eating dinner. Tell me what you are all talking about.

PLASTER: I expect most of the talk would be about women; same as with other guys at other tables. What I myself would like to say would be to the Colonel, who -- speaking of decline and fall of establishment -- had a great recipe, but ruined it. The KFC establishment is still serving chickens that are well battered, but must be old World War II surplus poultry stored in freezers since...Well, since about the time Joe Biden and Prince Charles were born!

FQ: Thank you again, Simon, for this book. You never fail to impress me. Amy

Posted by FeatheredQuillBookReviews at 1:37 PM