#AuthorInterview with D.L. Jennings, Author of Awaken the Three

FQ: Do you already envision a grand and final conclusion to this many-tentacled saga – or will it “write itself”? 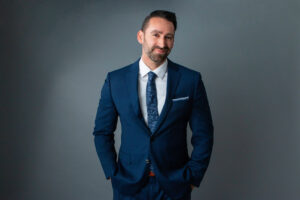 JENNINGS: I am very much a discovery writer, and I always describe my particular style of writing as laying the tracks while the train screams along. It is simultaneously gratifying and frustrating: I enjoy the twists as they come along because, about 90% of the time, I don’t even know they’re coming. I usually find myself working my way up to a crossroads and, as I’m standing there, I say “huh, what if this were to happen instead?”

That being said, I am currently working on book three, which I intend to be the conclusion of the series. I feel a lot like someone watching the beginnings of a sunset: I know where it’s going to end up, but I’m not exactly sure what it’s going to look like when it does.

That, to me, is truly the beauty of writing.

FQ: In the military, did you encounter strong female leadership that informed your creation of such characters as Duna in Awaken the Three? 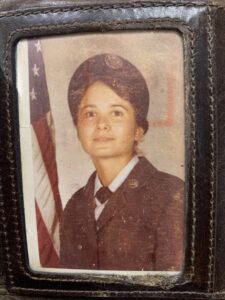 JENNINGS: I take every opportunity to brag about my mom when I can, because she was actually the reason I joined the Air Force in the first place. She started out enlisted (I still carry her basic training Air Force portrait in my wallet) and later got a commission to 2nd Lieutenant, only getting out when she had me. She has always been the most powerful example of ferocity and strength in my life, and I like to think that there is a little bit of her in every strong female character that I write.

After her is my younger sister Sara (readers will recognize her fictional counterpart, Seralith Edos), who embodies exactly the kind of toughness and intelligence that Duna exudes in Awaken the Three: she is independent enough to strike out on her own, but competent enough to know when she needs a team in order to accomplish something.

Between the two of them, I have practically limitless inspiration for writing strong, fleshed-out female leads.

FQ: Is Thornton Woods really D. L Jennings – or is there another character with whom you identify more closely?

JENNINGS: It was that obvious, huh? I actually lifted both Thornton and his father, Olson, from an earlier story that I started in my early 20’s but never finished. Thornton was unabashedly D.L. Jennings, and vice versa.

When I write characters, I love to base them on real people in order to give them the depth that makes a good character — their mannerisms, speech patterns, etc. — and Thornton was my first real foray into doing that. I always figured that they say “Write what you know,” and who else do I know better than myself? There is a lot of me that was poured into him when I wrote him: he means well, but can sometimes see his good intentions blowing up in his face.

Besides channeling a lot of my own frustrations and shortcomings into him — because who likes a protagonist who’s perfect? — I also wrote in some qualities that I wish I had: he’s a lot more patient than I am, and he’s painfully optimistic. In fact, he’s rebuked by one of his companions, Kethras, who explains to him that “some things in this world cannot be solved by good intentions.”

There are definitely some days where I wish I had Thornton’s optimism. 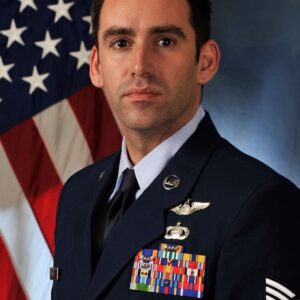 FQ: Have your own travels and transplantations given you insight into the experiences of Thornton as he sees new, undreamed of cities and inventions?

JENNINGS: Definitely. My mom has always loved to travel, and she passed that love on to me and my brother and sister. By the time I was 14, I had already been to Europe twice, and would go again several more times when I could travel on my own.

One of my earliest memories of traveling with her was when we went to France. I remember staring at the Palace of Versailles thinking “someone actually lived there once,” and being amazed that someone had built something so impressive. In fact, Versailles was one of the inspirations behind the palace of Djozen Yelto in Awaken the Three, where one character remarks that its sole purpose was a blatant show of wealth. I try to channel that awe whenever I write a character experiencing a new city for the first time. This world never ceases to amaze me — now imagine how much more incredible a world of fantasy might be!

FQ: Did your feelings about your military experience, happening as you began this series, seep into the book and influence your depictions of maneuvers, warfare, and destruction, et al?

JENNINGS: I used every opportunity to draw upon my military experience when writing both books, because war and fantasy have always been nigh inseparable. Two of my literary heroes, J.R.R. Tolkien and Robert Jordan, both served in the military, and I think it’s obvious in their works. I drew from that same well and channeled my own experience of being deployed and going off to war when I wrote each and every battle scene.

There is an instance in Awaken the Three where one of the characters is being sent off to battle for the first time, and his thoughts mirrored my own when I was getting ready to go on my first deployment. There is a degree of uncertainty associated with it — a fear of the unknown, to be sure — and a whole lot of questioning of the life choices that led up to that moment. But in the end, you realize that life is all about conflict: whether it be on a large scale like war between two nations, or a small scale like whether to pour either creamer or bourbon into your coffee at 2pm. Decisions, decisions. 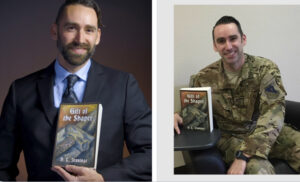 FQ: Do you see in our current crazy world any parallels to some of the chaos - and the potential for idealism - depicted in Awaken the Three?

JENNINGS: Unfortunately, all too much. One of the reasons that fantasy books remain relevant is one thing I touched on earlier: conflict. As long as humans have recorded history — and doubtlessly before — we have been at war, and war is no exception these days. The world of Awaken the Three and of Gift of the Shaper is one that holds many parallels to our own in the fact that there are a number of factions vying for control through conflict, and the seismic shifts in the political climate tend to send shockwaves throughout it. There are also very real issues that arise as well that the characters deal with such as sexism, discrimination, identity issues, and the loss of a loved one. Sure, the work is fantasy, but the ideas that it’s rooted in are very real and I think people can identify with characters like Duna and Elyasha — even the half-eye Dailus, to a degree — when it comes to dealing with everyday problems that rear their head.

FQ: Is writing now your primary profession or are you exploring other avenues of creativity?

JENNINGS: I always tell people that “I work to support my writing habit;” I hope one day that writing will pay the bills, but for now it’s still a dream that I’m in active pursuit of. In the meantime I’ve taken a job as a deployment-based government contractor that gives me the time and the freedom to write while also allowing me to do crazy things like pay rent and buy food, and I think it’s a great arrangement. The nice thing about my job right now is the time off: I deploy for 6 months out of the year, but the other 6 months is my own to do with as I will, which I try to use as much as I can to write. Besides working on book three of the HIGHGLADE series, I’m also working with a producer in Hollywood on adapting Gift of the Shaper into a screenplay, so I’m definitely keeping my options open. If there is one thing my time in the military taught me, it’s that if you keep in dogged pursuit of something, chances are it will eventually come to you.

FQ: Which writers influenced you most in the creation of the Highglade world and its occupants?

JENNINGS: I mentioned J.R.R. Tolkien and Robert Jordan earlier, and there is no question that the two of them were the heaviest influences on the creation of my fantasy world, but a third writer that I’ve always admired in terms of sheer ability is Ray Bradbury. In fact, I always say that if I had Dr. Frankenstein’s secret for reanimation, I would take the prose of Bradbury and the storytelling ability of Jordan and stitch them together to make the perfect writer. I’ll never forget the first time I read the opening line to Fahrenheit 451: “it was a pleasure to burn.” I was reading the book on a flight from Dallas to LA and I had to stop and put the book down more than a few times to just marvel at the way he turned a phrase. I actually see his writing style somewhat perpendicular to Jordan’s in fact: Bradbury is a master of description, and Jordan is a master of story.

I think the best way to explain it is to think of it like driving. The way that Bradbury tells a story is a lot like a slow, straight drive down a beautifully decorated part of town: there aren’t a lot of twists and turns, and it’s a mostly uneventful ride, but the scenery on the route is breathtaking. You make sure to take the time to stop along the way to appreciate it. Years later you can even recall it and are hard pressed to think of other examples that surpass it.

Jordan, on the other hand, takes you on a ride like a rally car driver. When you start out, you have no idea where the finish line is or how you’re even going to get there...and then he flashes you a wild grin and floors it. Speeding along, you barely have time to watch the scenery fly by, but Jordan, your confident driver, navigates it like a master. Suddenly you find yourself hurtling toward the finish line and you realize that you were so caught up in the mad ride that you didn’t take the time to look around and appreciate your surroundings; you can barely recall what the trees looked like on your way there, or how the birds sounded — but each and every turn surprised you, and the finish line was the embodiment of perfection.

When I write, I try to channel both Jordan and Bradbury. I want my stories to be exciting and well-paced but beautiful enough to merit a pit stop or three to just get out and enjoy the scenery. Until then I’m just enjoying the ride.

Posted by FeatheredQuillBookReviews at 1:28 PM