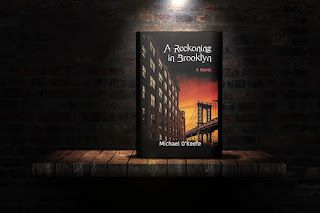 FQ: How much of Butchie or Eddie is really you?

O'KEEFE: Actually none. The character in the book who represents me most closely is Paddy Durr, the detective and main character of my first novel, Shot to Pieces. Butchie and Eddie are composites of cops and detectives who I admired as a kid. They put me on the right path and kept me there. They also imbued in me an unquenchable desire to protect people who couldn’t protect themselves, and the moral underpinnings to choose to always do the right thing, even when it wasn’t the most advantageous thing for me.

FQ: Have you ever worked with a tight group of cops such as you depict in the book, with family and social connections that seem so essential?
O'KEEFE: As a cop and detective for almost twenty-five years in the NYPD, I experienced that brotherhood and family-like love and loyalty on an every day basis. Butchie’s and Eddie’s loyalty to each other isn’t contrived. I lived it.

FQ: In your years as a cop, did you have any connection, direct or peripheral, to the ABSCAM scandal or similar politically motivated crime schemes?

O'KEEFE: I worked a number of organized crime and gang conspiracy murder cases, but with respect to government corruption; I was almost indicted for murder at the behest of the mayor of New York, for the simple act of saving my own life—shooting and killing a man who was trying to do the same to me. After I was acquitted, the mayor sicked his pals in the US Attorney’s Office on me and my Anti-Crime team. Their position was; we were making too many gun arrests and seizures. “No one could be that good,” the US Attorney maintained. Five years and five grand juries later, they found out they couldn’t get a jury to agree.

FQ: You have written two books about crime in Brooklyn; what is your sense of the direction that area is going – up or down – in the current era?

O'KEEFE: The Bushwick section of Brooklyn, where I grew up and later worked, has changed substantially since I retired. It went from a drug infested murder-warren to something akin to the West Village. Art galleries, restaurants, gourmet shops etc. But presently violent crime is rising at a precipitous rate, even in Bushwick. The culprits are the mayor, the city council, and the media who have beaten down the police and handcuffed them from doing their job. There will be a rebound and a return to sanity as it relates to criminal justice policy, but it’s going to get worse before it gets better.
FQ: This book, while violent and filled with hateful villains, is essentially a hopeful story that shows how friends can help friends and morality is an absolute that rises at times even above the law. Is that a theme that was observable in your work as a cop?

O'KEEFE: It was the essence of being a cop. A reviewer of the book stated this premise succinctly; “This is not a book for the tender or easily offended, but it has the visceral power to inform the reader what it’s like to live a violent life on the side of the angels,” wrote Otto Penzler, of Penzler Publications.

FQ: Who is your favorite crime/tough guys novelist?

O'KEEFE: I grew up a fan of Hemingway, Steinbeck and Fitzgerald. They wrote about crime with a very literary approach. I discovered Wambaugh in high school. I loved his human portrayal of cops, not excusing but understanding human frailty in law enforcers. Presently I am big fan of Michael Connelly, Nelson DeMille and Lee Child. They get it. They have taken the time to know cops and do their research. James Patterson not so much.

FQ: Do you have plans for the next creative endeavor?

O'KEEFE: I expect to release, Burnt to a Crisp, a Paddy Durr novel, in November of this year. I’m already half done with the sequel to that. In the meantime, I am preparing A Reckoning in Brooklyn and Shot to Pieces for release as audio books. I’m hoping to have them both available before the spring.

FQ: Do you have plans, as seems possible from the book’s ending, for a sequel? Perhaps the development of Paddy Durr?

O'KEEFE: As you can see from the previous question, that is a resounding yes. But eventually Paddy must retire. Despair not! Paddy’s children, Patrick and Kaitlynn have followed him into the “family business.” Then there is an entire generation of young cops and detectives Paddy has mentored over the years. The possibilities are limited only by my imagination.
Posted by FeatheredQuillBookReviews at 7:18 PM