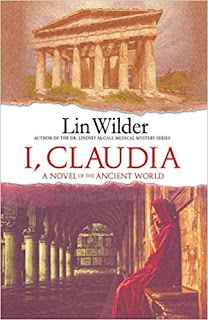 Today, Feathered Quill reviewer Amy Lignor is talking with Lin Wilder, the author of I, Claudia: A Novel of the Ancient World.

FQ: I’ve spoken with a few authors on this subject, and when asked, they said that the world of “Christianity” is something they’d stay away from because of the turmoil it could cause. You have more than a few books that bring up this subject. Was this a focus of your writing from the beginning?

WILDER: Interesting question. And one I expected to be asked six books ago. The short answer is yes, it was a focus of my writing from the very beginning. I have been surprised-and pleased-that this fact has been so well tolerated by readers with a variety of different beliefs. As well as those with none at all. Maybe this is because the stories tend to be told from the perspective of coming to the faith as adults. And because I write less about ‘it’-religion- and more about the Person...the historical man who was born and crucified. And who claimed to be the son of God.

I smile at the notion of ‘staying away from Christianity because of the turmoil it would cause’ because so many of us seem to live in constant turmoil; even to invite it.

FQ: Along those same lines, what was it about this genre that made you want to dive in? Is there another genre you have not yet worked on that you would like to one day?

WILDER: Forgive the ‘woo woo’ nature of this reply but this book was not my idea. I planned to write the fifth in the Lindsey McCall mystery series and had no intention of switching genres. Until a March morning last year, this new story appeared in my head. Not just an idea but as a fully formed concept with the title, perspective, and first person style-brand new to me. At the same time, I recalled my long-held ‘friendship’ with Pontius Pilate. I was excited - and scared...

FQ: Writing about the wife of such a famous historical figure as Pontius Pilate is a brave, and to some a controversial, idea. What was it about Claudia that drew you to her and made you want to tell her story?

WILDER: I am not sure it’s brave, at all. Just that from the very beginning of my conversion to Christian Catholicism...especially during the recitation of the sorrowful mysteries of the Rosary, I long felt myself to be a kindred spirit with this man Pontius Pilate placed in a wholly impossible position. One that I could identify with. Especially while reading his reply to Jesus’s statement: ”For this reason I was born and have come into the world, to testify to the truth...”

Pilate’s reply to Christ, “What is truth?” is almost universally dismissed as sophistry. It never felt so to me.

While researching the surprisingly unidimensional and superficial view of ‘ the scholars’ view about him, my sympathy grew as did my suspicion that we don’t know...cannot know who he was. Nor even guess at his motives. The field was open for a very different view. Perhaps even a more valid one.

The perspective of writing about Pilate in an ‘objective’ sense through Claudia appealed to me. I had never given much thought to her...to this wife until then. That single comment of hers, recorded in the Gospel of Mark was most evocative and as I pondered her words, they connoted far more than the somewhat flat character I encountered in the novels written about her. She was a mystic, she had to be.

FQ: What reminded me in many ways of the present world (the battles when it comes to Democrats and Republicans) were the differences/battles between Claudia's and Sabina's beliefs. Did you find that any specific part of writing Claudia’s upbringing was helped by what we're seeing in the world today?

WILDER: No. Because I think very little is new. Whether we’re talking dissension, mobs, ingenious methods of cruelty and torture, all have been around since the beginning. And yet every age believes itself to face unique problems, challenges that are greater than any faced by women and men before us. Our own seems to insist that ours is the most (fill in the blank.)

Sabina, in many ways, reminds me of many Christians and Catholics I know or have known. Her prayers to Athena were recitations which she wrapped around herself for solace; that she was so indignant at the challenges from her young niece revealed more about herself than about Claudia.

FQ: Do you believe that Lucias had the power laid at his feet too soon? Do you feel like if he’d not been crowned the Tribune at just the age of 28 that he would have even embarked on this path?

WILDER: No. A man who had been training since 16 for warfare, was most certainly capable of handling power. After all, he was the leader of thousands of men, many older than he, like Quintillus, his lead Centurion.

I wonder if anyone is ever ready to take on duplicity, pretense, and subterfuge unless of course, this is where they are most comfortable. Like Sejanus, Caiaphas, and maybe Seneca.

FQ: On that same subject, do you believe Lucias would have been happy as a lawyer or doctor like others in his family; or, do you personally believe there is a fate already set in stone for everyone?

WILDER: No. I think he knew that life was impossible for him. He was a born warrior. It was there, in the heat of battle that he belonged. But...he got promoted.

Do I believe there is a fate ‘set in stone’ for each of us? No.

But here’s the rub to that...if we are true to our nature...that unique, unrepeatable person each of is...then maybe I do believe in a type of fate...

FQ: On your website, you announce that “I, Claudiais done. Kill the Monster!” Can you explain a bit as to why that appears there?

WILDER: Thank you for asking this question! Although I suspect I may have disliked being in his company, I love Winston Churchill ‘s quips about writing. One of my absolute favorites is this one. It more correctly describes the process of writing a novel than any I have ever read:

FQ: Your Dr. Lindsey McCall series is an exciting set of books. Are you currently working on the next in the series? If so, could readers have a “sneak peek” if possible? In addition, I see from your website that the title My Name is Saul is coming in the fall of 2019. Is there something you could tell us about that book?

WILDER: I was stunned when My Name is Saul showed up instead of the fifth in the Lindsey McCall mystery series. I had every intention of writing that 5th book, knew precisely which characters I’d bring back only to learn, after many days of trying to conceive the story, that if I did write it, the story would be forced, contrived.

It seems that this new, “ancient world series” has replaced Lindsey. At least for the time being. Thank you for asking this question...her series is indeed an exciting one!

“The guards tell me I will die tomorrow. In the morning...around sunrise. I would like that...to see the sun. I cannot recall the last time I saw the sun. A year and many months at least, I am confident.
About the dying itself? Am I afraid? Unfortunately, I must confess that I fear the sight of the blade coming at my neck, for even Nero will not crucify a Roman citizen.”

FQ: What is the one thing you absolutely love about being a writer? Is there one thing about the industry that, if you could change it, you would?

WILDER: I published my first article when I was twenty-two and have been writing non-fiction ever since. The process of writing and publishing tells me what I think, believe to be true. Many have claimed that the best way to learn something is to teach it. I think not. The very best way to learn about a thing, person or event is to write about it.

But this unplanned adventure into fiction opens up even more than learning about something worth knowing about. Writing compelling characters, people the reader can sit next to, have a conversation with, compels me to cede control of the story to him or her. Once those characters take on heft, we must let them go. It is the thing I most love about writing...the sheer not knowing.

While writing the 4th of the Lindsey McCall series, I said to my husband on more than one occasion that I had no idea what would happen to Joe Cairns, the assassin turned hero in Malthus Revisited. Astonished, John asked how on earth that could be?

You asked if there is one thing I would change about the publishing industry?

The word industry implies I think, a systematic approach to an enterprise. There seems to me to be no system in our current day...rather a ‘let’s throw everything against the wall and see what sticks...’ In such a chaotic environment, I cannot select out one thing to change because I think it’s in constant motion.

FQ: I see also (and read in your series) that you are a lover of dogs. Can you tell us about Shadow and what role he plays in the Wilder writing system?

WILDER: Shadow. Thank you for another smile. Shadow is a miracle, at least fifteen years old, his quiet, unassuming, dignified presence is something the rest of our pack- Seymour, my husband John and I value, each day.

FQ: And thank you so much for your time, and a fantastic book. I’m a lover of everything historical and this was a great gift to the genre, I must say. Have a wonderful 2019, and I look forward to My Name is Saul.
Posted by FeatheredQuillBookReviews at 12:08 PM