Today, Feathered Quill reviewer Skyler Boudreau is talking with Zoe Tasia and Minette Lauren, the two authors who make up the writing team behind the pen name of Zari Reede, "author" of Blinked

FQ: What made you decide to set Blinked in 1975 New Orleans, during Mardi Gras?

ZOE: I decided on 1975 because I wanted a time with less advanced technology and I liked that era’s vibe.

MINETTE: I chose the city because I lived near The Big Easy for a large portion of my young adult life. I felt the fantasy element of our story would blend wonderfully during Mardi Gras.

FQ: Blinkedis a book co-written by two authors.  Why did you decide to write under a single pen name, rather than have both your names printed on the cover?

ZOE: I think we both value our privacy, so we planned on writing under pseudonyms when working on our own books. I guess we could have used Minette Lauren and Zoe Tasia, but I really liked the name Zari Reede and for a reader looking for our books, remembering Zari Reede is much easier than remembering two names.

MINETTE: I know it sounds terrible, but I probably wouldn’t read a book with two author’s names on the front. I never considered using both names. I loved the name Zari. It was one of Zoe’s Characters.

FQ: As a two-person writing team, after writing three books together, what are some of the challenges you’ve faced in writing collaboratively? Does your teamwork make any part of writing easier?

ZOE: I’ve learned if I have a certain idea I really want to write about at a later point in the book, I better bring it up soon, because it may not be possible depending on what Minette writes next. We both have great imaginations and can come up with some pretty wild story twists. Writing together challenges and pushes me. I find that I take more risks when writing as Zari Reede. Co-writing is fun and much easier than writing alone. I don’t think I’ve ever had problems with writer’s block when working on a Zari Reede book. Wish I could say the same about my solo projects. 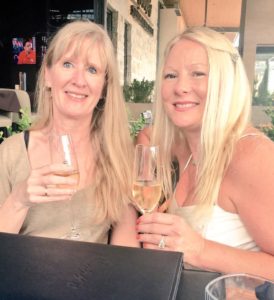 MINETTE: Zoe and I have very different reading taste, so finding a story we both want to tell is sometimes challenging. Editing is always a difficult process, but It’s nice to have back up. It takes me twice as long to write a book on my own, and co-writing holds me accountable for getting the work done.

FQ: Many fantasy novels published today are dark and serious but Blinkedis laced with humor. How do you find the comedy in your writing? Do your senses of humor differ from one another?

ZOE: I’m a firm believer that you can find humor in almost situation. I’m a bit of a social klutz and major nerd, so often when I develop comedic moments, I draw upon that. I sometimes throw Minette off with some of my geeky references, but I think we find the same things funny generally.

MINETTE: Zoe is being kind. She has a far better vocabulary than I do and an uncanny memory for details and facts. Sometimes I have to use google to investigate her meaning. She is hilarious and makes me laugh out loud when I read her scenes, but she is a closet comedian. People who know her would be surprised by her imagination. I always try to work a little humor into our stories. Sometimes it becomes a competition over who can write the funnier scene. Even our Mystery-thriller has a few chuckles.

FQ: What is one element (a character’s personality, setting, voice, etc.) that changed between drafts of Blinked? Why?

ZOE: Timing was really hard to keep track of as we moved between characters and worlds, so I know we had to make changes there.

MINETTE: Ugh, the magic! The witch was taxing for me. Zoe was a stickler for rules in fantasy, and I’ll be honest when I say, I never quite understood the rules. As a result, I probably wrote more Mindy, Jim, Reggie and Rapunzel scenes.

FQ: Is there any story behind the pen name “Zari Reede?”

ZOE: I went through my World of Warcraft account. I have one character named Zari and one named Reede. The names worked well together.

MINETTE: Zari was a character in Zoe’s familiars’ book. I had never heard the name before and thought it was different. Reede was like read, plus my sister, who was a writer,said she would write under the name Freede. I liked the similarity of it.

FQ: What does your writing process look like? Does it change with every book?

ZOE: We take turns starting stories and usually end up writing about 1,000 words before emailing it back. I don’t think it has changed all that much.

MINETTE: I love the spontaneity we start each story with, writing by the seat of our pants. About half way through, we meet up for a champagne filled lunch meeting and discuss where we are headed. After that, the cards all fall into place. I miss the writing when we finish a story together. The editing is a bear.

FQ: When a character “Blinks” in your novel, they exchange places with an inhabitant of the mysterious world Ortharos. How was this interesting idea initially inspired?

ZOE: I knew I wanted us to write a fantasy book next and I knew I wanted to yank the reader into a dramatic moment with the first line. So, as authors are wont to do, I played the what-if game and came up with the first line of the book. “I went to bed with my husband and woke up with a monster.” Then I had to ask myself, how did a monster get in bed with her without her noticing? And that’s when I came up with the concept of Blinking. From that point, Minette and I elaborated and that first line grew into this zany book.

MINETTE: We always take turns starting the stories. Zoe gets credit with Blinks’s beginning. We did have to meet once or twice to flesh out the particulars so that we both understood the balance between worlds. 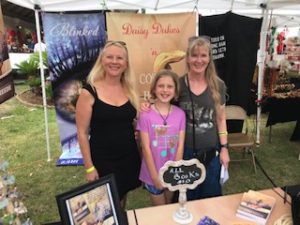 FQ: Is there anything that you’ve learned from each other while writing together? If so, what?

ZOE: I learned that Minette is very much a pantser. As a plotter, I worried about how that would translate into a cohesive book. There are the occasional growing pains, but so far, the books have surprisingly come together with ease.

MINETTE: Co-writing is like literary chess. It’s an addictive game, but it takes two writers that play well together. It’s not always easy to agree and share the same vision of the story. Compromise is the best and the hardest part of the equation. We have both let go of scenes that ached to delete, but we can agree later that the book was enriched by the sacrifice.

FQ: If you could offer any advice to young writers who want to collaborate on a project, whether it be a book, short story, or other form of fiction, what would it be, and why?

ZOE: One of my favorite authors is Ilona Andrews. Ilona Andrews is a writing team consisting of a married couple. I love my husband very much, but I fear such a project would put much strain on our marriage. Prior to becoming published, I thought co-writing would be very difficult. After all, most writers do write alone or only co-write on the one-off project. Minette and I didn’t set out to write a book. That a writing exercise ended up becoming a novel, was a happy surprise, certainly to me. My advice is not to be afraid to collaborate with another author and be aware that different authors approach it in different ways. Experiment and do what works. You’ll never know if co-writing is right for you unless you try.

MINETTE: It’s great fun and easy to write with someone you know and trust. However, it’s not for everyone. I can’t think of one other person I would want to share this journey with. My husband is my best cheerleader, but as Zoe said, I wouldn’t want the added friction of writing disagreements weighing down our daily lives. Zoe and I live an hour away from each other. It’s a good buffer for co-writing.
Posted by FeatheredQuillBookReviews at 12:39 PM