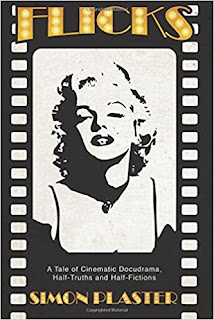 FQ: When it comes to Henrietta, do you have a planned ending for the main character of your series before beginning the first book, or does the time to say goodbye come about during the process?

PLASTER: I'm glad you ask. Henrietta --- named after her hometown and originally spelled with a y (which drove her to distraction) --- was what I thought a minor character in the first tale, titled SUMBITCH. Only after reading what she did and said, did I realize she was the central and most engaging figure. The discovery is typical of delights to be found in writing. Say goodbye? That would be undelightful, but it's up to her. She has a mind of her own.

FQ: You offer a snippet of info on a non-documentary flick in pre-production entitled The Platinum Loop which is what your story is loosely based upon. Can you give readers more information about this and how you discovered this particular fact?

PLASTER: After stumbling upon a trailer for the flick on YouTube, then reading the book, I got in touch with the author/screenwriter and offered an idea for a somewhat different and better storyline. He told me to go to hell. That's Hollywood for you: Sumbitches won't give an outsider a break.

FQ: Along those same lines, are you personally a Monroe fan? If you were asked to give your own personal views on the "how and why" she died, what would those be?

PLASTER: While not necessarily a Marilyn Monroe fan, I have a lot of fondness and admiration for the woman beneath the image, Norma Jeane Baker. I think she was emotionally unstable, vulnerable, and killed herself by drug overdose. The specific "why" of it, in my opinion, was the way she was exploited and discarded by the Kennedy brothers.

FQ: Based on the plotlines of this series, are movies and TV also personal "favorites" for you? Are they hobbies, perhaps, or obsessions?

PLASTER: I hardly ever go to movies anymore. On TV I like what might be called traditional flicks, including old ones. Turner Classic Movies is a priceless treasure.

FQ: Who is your own personal favorite when it comes to TV/movies? And if you could choose for us, who would be "the one" actress you could see playing a perfect Henrietta on the small and/or big screen?

PLASTER: Hmmm. Tea Leone comes to mind as having that so-called "it" quality that makes you keep an eye on her. As for an actress to play Henrietta, I'm an oldtimer and not up to date, but actually have in mind the young Cissy Spacek when I write about Henrietta.

FQ: Just between us . . . will Henrietta ever garner that Prize? And if so, what would you think the headline would read that would bring home the gold?

PLASTER: Well, some may recall that in my tale titled TICKS, she got a story put in The New York Times about a court case and expert testimony that creation of a human allergy to meat and milk would lead to vegetarianism and eliminate more methane gas than the amount of CO2 put out by burning fossil fuels. The article included a picture of a cow below a headline saying SHE DID IT! Later she was told that the Times ran the story by "a correspondent from Hicksville" to discredit the idea. Henrietta is way too honest to ever make a name for herself in today's journalism.

FQ: You weave the web of sarcasm quite well. Have you ever had to deal with skeptics or perhaps those who dislike that writing style?

PLASTER: I like to think of my writing as more satirical than sarcastic, but no doubt there are hundreds of thousands of what you call skeptics out there. Nothing would suit me better than to deal with them, but book sales have been flimsy as an old maid's bedroom curtains.

FQ: What advice would you give to start-up authors who also like that web of sarcasm on how to best deal with the negative?

PLASTER: My advice would be to try to come up with something funny, and send it to me.

FQ: What's up next for Henrietta?

PLASTER: Well, her new boss adopts a sensationalist style of journalism and tells her to find a local angle to go with a British tabloid story about possible sighting of a ghost at Buckingham Palace. She locates a Haunted Castle dinner theater and runs into a hell of an uproar staged by Me Too witches. The haunting tale, scheduled to be released on or about Halloween, is titled BOO!

Posted by FeatheredQuillBookReviews at 1:36 PM