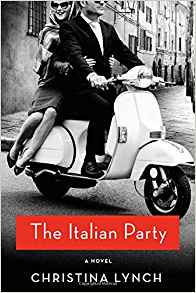 Christina Lynch takes her audience on an adventure to the Italian countryside in her debut novel, The Italian Party.
Newlyweds Scottie and Michael Messina begin their lives as husband and wife far from the familiarity of their homeland, America. The year is 1956 and the place is Siena, Italy. Their marriage is built on a foundation of secretes. Michael believes Scottie is a privileged debutante and comes from fine stock and family wealth. Granted, Scottie did grow up with the finer things in life—private boarding schools, followed by an equally prestigious degree from Vassar, but maybe the family wealth wasn’t quite what it used to be. Michael, on the other hand, was a kid from the Bronx. Fortunately, Michael rose above humble beginnings. He was smart—very smart and fortunately, Scottie wasn’t. She was the perfect bride for him given his line of work.
So how did this young couple end up lightyears away from their homeland? According to Michael, he landed the job of a lifetime. He was hired to be the Ford Motor Tractor Company’s esteemed representation in Italy. The war had ended in Europe a mere eleven years prior. It was important for America to maintain a presence in the wake of the remnants the Germans had left behind. What Michael failed to explain to Scottie was this great job was little more than a cover for his real job: the CIA. His true purpose in whisking his new bride away to the lovely Tuscan countryside was to play a significant role in persuading the upcoming election’s outcome to that of democracy. Scottie loves Michael—especially his breathtaking good looks. They are the signature American couple—she with her gorgeous blonde hair and him with his swarthy good looks. While there is a definite adjustment period for the two initially, Scottie learns how to blend in with the locals—perhaps a bit too much, while Michael immerses himself further into the spy versus spy life he willingly signed onto. What the two couldn’t possibly know is just when everything seems to be falling into place, chaos is lurking around the corner awaiting their arrival.
How fitting for Christina Lynch to spin a tale of romance, politics and the ever-looming threat of communism for today’s audience to gobble up. This is a story of delicious action and adventure, sprinkled with the perfect balance of romance throughout. Ms. Lynch has a wonderful ability to set a scene and solidify the allure with crisp and believable dialogue. This may be her debut novel, but the writing portrays a seasoned veteran from beginning to end. The development of unique personalities showcases the uniqueness of each of her characters; paving the way for her audience to bond with each one. She is also keen to note the dynamics between husband and wife and particularly, the woman’s role in the late 50’s which anchors the relevance of the story even more. Bravo Ms. Lynch. This was a fun read with great twists and turns along the way.
Quill says: The Italian Party is an adventure that reaches far beyond the notion of a ‘party.’

Posted by FeatheredQuillBookReviews at 2:45 PM