FQ: Being a ‘visual’ writer is a talent that not many possess. In other words, some tell the tale but you have the ability to speak to the reader of NYC, the 70’s, and even the ‘Son of Sam’ hunt with such clarity and emotion that it all comes alive, almost as if the reader is there in The Big Apple. Can you tell readers a bit about where that passion and emotion come from in regards to your subject and location?

ZAHRADNIK: That passion and emotion comes not from the specific material, but from how I fell in love with stories when I was in fifth or sixth grade. I became fascinated not with just reading, but with what the writer was doing. I called it putting movies into my head. When I sit down to write, that’s what I want to do. Put my movie in your head. Everything I do when I write has the goal of creating what John Gardner called “the fictive dream,” which sounds more writerly than movies in your head. But it’s the same. I cut if material is getting in the way. I add if it’s needed. I do a fair amount of research, yet am very selective about which details I include. I want to carry you along. I want you turning pages.

FQ: You have a background as a journalist (working in the industry for 30 years), so the question to be asked, is Coleridge Taylor a muse? Such as, do you come up with the stories, characters, etc., from your own real life and what you personally covered?

ZAHRADNIK: Short answer: no. I covered cops early in my career, but not as long or in as much depth as Taylor. My career experience means I don’t have to research the mechanics of reporting. At the same time, I strive to put in just enough so it’s interesting—not a journalism lesson (see my answer above). People I’ve met have certainly informed characters, or parts of characters, in the stories, but that comes as much from observing everyday life as my former work life. The main plot of each book, that comes from my imagination.

FQ: If you had to say, is there one magazine and/or newspaper that is truly missed by the journalists out there? One that perhaps gave it their all to tell the facts and deliver the stories of the basic ‘unknowns’ out there and is no longer around?

ZAHRADNIK: I’d say the problem is the many newspapers we’ve lost. Competition better insured all the facts came out. Bloggers in basements don’t do the same job.

FQ: For all the dog people out there, of which there are many, is Mason ‘the dumbest Lab in New York’ a real pooch?

ZAHRADNIK: Jake, a chocolate lab, was our dog for ten years until he died a year ago January. We adopted him at three-ish (Pet Rescue wasn’t sure of his age). Mason and Jake have a lot in common, including not-the-highest dog IQ and a tail that never stops—so there’s one character from real life that made it into my books.

FQ: Considering your educational and career background, can you tell us your feelings towards the online news world? Is having all this online news more efficient for the world out there than it was when it came via only print? What, to you, are the drawbacks of the online world?

ZAHRADNIK: I started one online news site—CNNfn.com— and worked on others. Online news is more efficient; it’s faster. It’s not great for long-form stories. It’s not great for investigative journalism. Those are two areas where we’re losing out. I worry most about local news in towns and villages and counties outside the big markets. The mayor of New York City will always be quoted. Bloggers in basements won’t cover your local village’s planning board. You’ve never needed a degree—Taylor doesn’t have one—or a license to be a journalist. Thank you, First Amendment. Online opens reporting up to many more people. That’s great. But agreed standards of professionalism have been chucked overboard by many websites. Facts are important, as Taylor would tell you. Too many ‘news’ websites wouldn’t know a fact if it ran them over in the street. 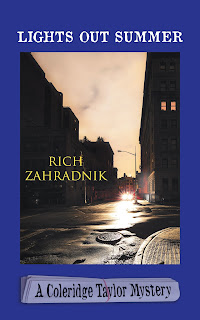 FQ: Coleridge Taylor is one of those characters that deserve a TV spot. Because others are saying ‘so long’ to the screen (i.e., Temperance “Bones” Brennan), is it possible in the future to see Coleridge Taylor in his own series? Are you looking in that direction eventually? If so, have you ever thought about the actor who would be perfect for the job?

ZAHRADNIK: Sure, I’d love a TV series. Getting Hollywood’s attention is tough. I always say that A&E or Amazon would make a good home, because they work hard to get the look of a place and time right. I like a younger Mark Ruffalo for the job--which isn’t really possibly, given we can’t make Mark younger and he doesn’t do TV. He’s rumpled enough for Taylor. The Taylor books would make a better TV series than a movie.

FQ: Do you have thoughts in regards to delving into any other genre in the future?

ZAHRADNIK: I’ve completed a thriller set in the present day called The Causeway and a middle grade science fiction novel Samuel Tripp and the Timer's Watch. I’m working on a present-day mystery set among the Russian immigrants in Brooklyn. I will soon set that aside to work on book five in the Coleridge Taylor series.

FQ: If you could have dinner with one author or character, who would it be and what question would be at the top of your list to ask them?

ZAHRADNIK: I had a great, long dinner with Ray Bradbury many years ago, so while he might have been first, I’d now choose Dickens. Charles, tell me which is your best novel and why.

To learn more about Lights Out Summer (A Coleridge Taylor Mystery) please read the review at: Feathered Quill Book Reviews.

Posted by FeatheredQuillBookReviews at 5:36 PM