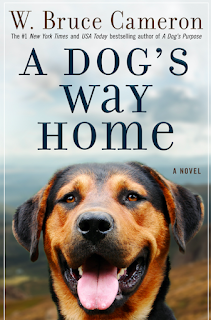 (May 1, 2017) West Orange, New Jersey—Natural and eco-friendly skincare and cosmetic company, Ecco Bella is releasing the new novel, “A Dog’s Way Home,” by William Bruce Cameron, NYT’s bestselling author of A Dog’s Purpose online at www.EccoBella.com on Tuesday, May 9, 2017.

To shed light on cruelty-free beauty and an overall compassion for all living beings, Ecco Bella has teamed up with Cameron and will be offering Ecco Bella e-commerce consumers a signed copy (retail value: $24.99) with every purchase order of $125. A portion of the proceeds will be donated to Friends of Animals, a non-profit international animal advocacy organization working to free animals around the world from cruelty and institutionalized exploitation. The book will also be promoted on Ecco Bella’s celebrity fan and ambassador, Tracy Anderson’s Instagram, @TracyAndersonMethod.

About W. Bruce Cameron: William Bruce Cameron began his writing career as a humor columnist for the Denver Rocky Mountain News. He is a Benchley award winner for humor and was the 2011 NSNC Newspaper Columnist of the Year. He has written for TV (the show “8 Simple Rules,” based on his book) and co-wrote the feature film “Muffin Top: A Love Story,” which was released in November of 2014. His novel A Dog’s Purpose spent 52 weeks on the NY Times bestseller list. DreamWorks developed it as a film and he and his writing partner, Cathryn Michon, wrote the screenplay. The sequel, A Dog’s Journey, was published May 6, 2012, and was instantly a NY Times bestseller. His novel The Dogs of Christmas was published October 2013, and he and his wife wrote the screenplay for Fox 2000. His novel, The Midnight Plan of the Repo Man, was released October 28, 2014. Yes, it has a dog on the cover. For additional information about the author, visit: www.brucecameron.com

About Ecco Bella: Founded by social entrepreneur Sally Malanga, Ecco Bella has been a pioneer in natural and organic beauty products for over 23 years. Malanga began Ecco Bella, a name that means "Behold Beautiful!" to celebrate the beauty of her customers, because of her disgust with the use of animals for product testing, and with respect for the wonder of nature. To that end, Malanga realized there was a world of plant-based ingredients including powerful nutraceuticals from ethical suppliers that could transform the world’s approach to beauty. For more information about Ecco Bella visit www.EccoBella.com.
Posted by FeatheredQuillBookReviews at 6:28 PM