How To Write a [ Genealogical ] Memoir

How To Write a [ Genealogical ] Memoir
By: Ceil Lucas

The question for me would be, “How do you not write a memoir ?!”, with an exclamation point. I was born in Phoenix in 1951. In 1956, my civil engineer father was offered a job in Guatemala City. We spent four years there and that’s where I started school. In 1960, he was offered a job with the Food and Agriculture division of the United Nations (FAO) in Rome, Italy. I finished elementary school and high school there at the Overseas School of Rome and returned to the U.S. in August of 1969 for college. The four years in Guatemala and the nine in Rome were the very rich source of many memories and stories, especially given the particular span of years. The 1956- 1960 years in Guatemala were marked by strong political unrest that would not really end until 1996.  1960- 1969 in Rome, the years of the post-war economic “boom” and the beginning of the “years of lead”, with more political upheaval. In both places, I immersed myself in the language and culture, with school, extensive travel in Central America and Europe, and many bilingual and bicultural friends. In 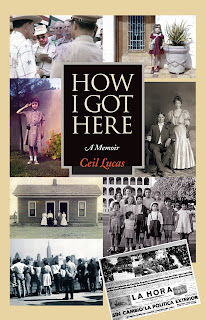 addition, my mother documented almost everything with her trusty Brownie camera and later with the disposable instamatics. So the memories in my head are all very well supported with an extensive photographic record in black and white starting with when I was brought home from Good Samaritan Hospital – known as “ Good Sam”  - on that early Monday evening in March of 1951. In my early thirties, no doubt spurred by my father’s passing in 1981, I started looking back and was struck by the breadth and depth of my upbringing in these two outstanding places – Guatemala City and Rome, Italy – and by the sheer luck that had landed me there. I started making notes on the memories and, insofar as I could, pairing the memories with photographs. The memories grouped themselves chronologically from 1954 through 1972 and the outstanding ones made themselves known, the ones that would have to be included. And the memoir of those eighteen years took shape.

But there was something else going on at the same time. The result of my expatriate childhood was that when I came up for air at Whitman College in Walla Walla, Washington as a freshman in August of 1969, I almost invariably said, upon meeting someone new, “I’m not from here; I didn’t grow up here.”, “here” meaning America. The “I didn’t grow up here” part was correct but the “I’m not from here.” part turned out to be somewhat off the mark but I wouldn’t know that for a while. I spent 1971-1972 in Italy, but I moved back to the U.S. for good in August of 1972. I go to Italy yearly and have been teaching Italian since 1973, but my home is now “here”.  My “I’m not from here; I didn’t grow up here” mantra now comes with a “but” that finds its source directly in my family’s genealogy. And at the same time I was working on getting the memoir organized, I had started working on that genealogy. My mother had passed on a fairly good chronology for both her side and my father’s but neither chronology extended back past about 1810. So I started digging seriously. I got comfortable with the National Archives in Washington, DC to the point of entering many days at 9 a.m. and exiting at closing time. I also became familiar with the Maryland resources available in Annapolis and Easton and in other pertinent locations around the country and abroad. It’s a very long story which starts with my mother’s first ancestor being transported to Maryland’s Eastern Shore from Scotland in 1654 and my father’s first ancestor sailing from England to Philadelphia in 1679. The stories of the people in the ten generations on each side slowly became my stories and I came to feel that I know these people. If I was going to write a memoir, these stories could not be left out; they would have to be included. And so I wrote a genealogical memoir that runs from County Fife in Scotland in the 12th century and from Kent, England in 1500. It includes settlement in colonial Delaware and Maryland, the 1893 Oklahoma Land Rush, enrollment in the Union Army during the Civil War, and a saloon owned by Lebanese immigrants in what was then the Territory of New Mexico.

One thing is clear: once the genealogical facts have been learned, they cannot be unlearned. So that is my answer to someone who asks, “How do I write a memoir?”  For one, certainly include the historical context in which your own upbringing took place, the crucible of your own life. Document your own life and the historical context with photographs, newspaper articles, official documents. But also do the genealogical homework and include the stories of your ancestors also with as much documentation as you can. Make a separate draft that lists your sources as footnotes. A memoir is not an academic document and footnotes should not be included, as they can be mind-numbing, but you do need a record for yourself of where you got the information. You can include a list of sources at the very end of the memoir but do not refer to them in the text. And the information should consist of primary and secondary sources – that is, original documents and scholarly published accounts of the historical context. While Wikipedia often includes good lists of sources, do not write a memoir based on Wikipedia !

So, bottom line, include the stories of the folks who came before you. They are who you are.

Ceil is Professor Emerita, Gallaudet University in Washington, DC, where she taught linguistics 1982 – 2013 through American Sign Language. She started teaching Italian in 1973 and continues to do so.  She is the editor and co-author of 22 books. Her memoir, How I Got Here, is available on Amazon.


Posted by FeatheredQuillBookReviews at 3:30 PM